LET HAN CHINESE DROWN IN THEIR OWN VOMIT! 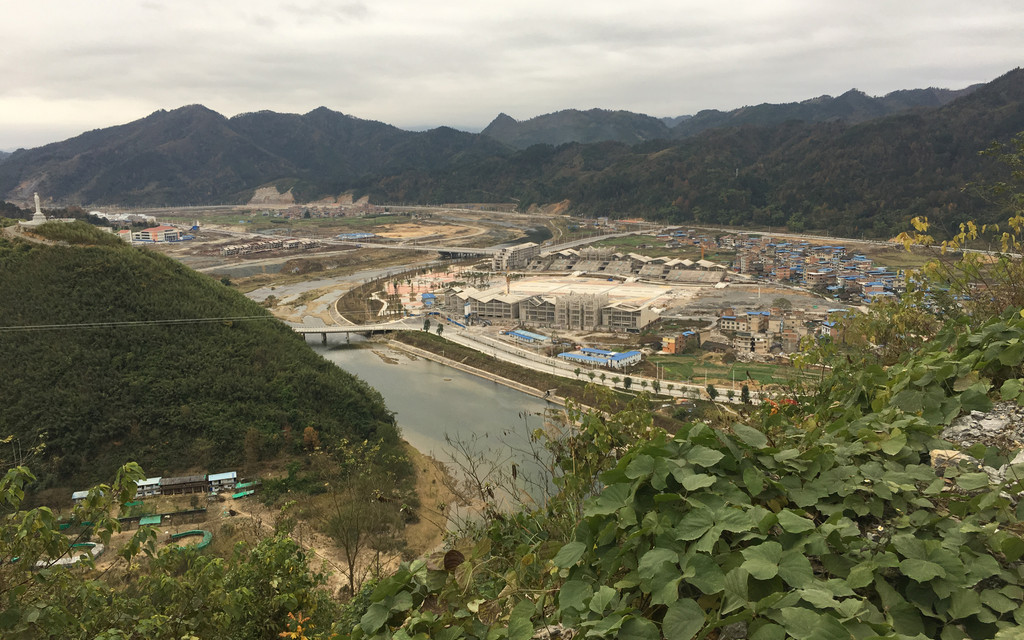 An unfinished outdoor stadium in Sandu, which missed its first payment in September, catching investors off guard. PHOTO: CHAO DENG/THE WALL STREET JOURNAL
54 COMMENTS
By
Chao Deng
Feb. 27, 2019 6:30 a.m. ET
SANHE, China—A building splurge in this impoverished pocket of rural China ended in half-finished projects and a trail of angry investors from some of the country’s wealthiest areas.
On a recent winter workday, investors and representatives from private fund companies in Shanghai and elsewhere descended on Sandu, a county in the deep south where tens of thousands of locals live on less than a dollar a day. After taxi rides from the high-speed rail station that took them past incomplete buildings and a gigantic golden statue of a man on horseback, they sat in government offices, demanding repayment.
“We sympathize with you investors,” Jian Shiwei, deputy general manager of a Sandu government-backed investment company that borrowed hundreds of millions of yuan to develop the area. “But there’s no money right now.”

Chinese local governments are racking up debt to fund development, in part by tapping into a soaring number of privately offered funds.

*Top and bottom five plus Shanghai
Sources: Zhang Ming, Chinese Academy of Social Sciences; Wind (number of funds)
The standoff in Sandu is a microcosm of China’s mounting debt problem. Across the country, local governments and their more than 2,000 financing companies have run up trillions of dollars of debt to borrow and build their way to prosperity, tapping into ready financing from well-off investors chasing higher returns. Now the bills are coming due, and China’s slowing economy, curbs by Beijing on risky financing—and the massive scale of borrowing—are plaguing repayment and leaving some investors in limbo.
After the confrontation with investors and just before this month’s Lunar New Year holiday, Sandu hustled out interest payments for some overdue obligations. Still, investors and brokers estimate that the government and its companies will need to deliver two billion yuan ($297.6 million) more in payments this year, nearly three times Sandu’s annual revenue.
“Sandu has its problems, but we can’t blame it,” said Jiang Xiaqiu, a factory owner and investor who bought 1.6 million yuan of Sandu’s debt via a private fund in Beijing, with an advertised 9% annual return. “It’s the whole financial system and how poorly regulated the private fund industry has been.”
Sandu’s government debt totaled 3.73 billion yuan in 2017, according to official figures. Deputy propaganda chief Wu Maohua declined to comment on what the sum includes; some economists, analysts and experts say it doesn’t cover recent borrowings by government-backed investment companies, including off-the-book borrowing from private funds.
Mr. Wu said the county is working to resolve its debts, pointing to the overdue payments given to some investors. “You can see the government is being very diligent,” he said.
For its borrowing spree, Sandu turned to funds like the one Ms. Jiang invested in. These privately offered funds have mushroomed, with more than 74,000 of them, nearly 10 times the number five years ago. Independent brokers and wealth advisers market the funds to well-off clients. Ms. Jiang said a broker connected her with fund managers.
The proliferation of private funds and other money-raising channels for local governments makes it difficult for economists and for Beijing to track the total amount of borrowings. Official figures pegged the sum of local and central government debt at 29.95 trillion yuan ($4.457 trillion) in 2017, roughly 36% of the economy. 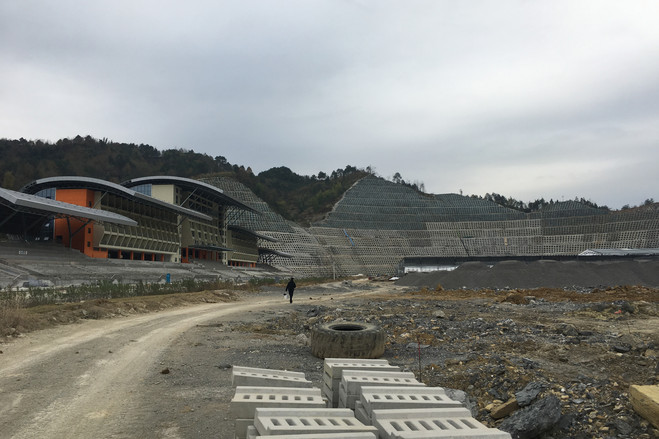 An unfinished horse-racing track, adjacent to an Olympic-scale sports center. PHOTO: CHAO DENG/THE WALL STREET JOURNAL
Off-balance-sheet borrowings by local governments are estimated to be nearly just as much, at 23.6 trillion yuan by 2017, according to Zhang Ming, an economist at the Chinese Academy of Social Sciences, a government think tank. When this hidden debt is factored in, he said, total government debt is about 67% of the economy. But the proportion is much higher in some places, such as less-developed areas trying to catch up, and Mr. Zhang’s estimates don’t capture all borrowings, especially those involving private funds outside banking channels.
In southern Guizhou province, where Sandu is located, infrastructure investment has risen more than 20% each year for much of the past decade, according to official data, and Mr. Zhang estimates that the debts of the local governments reached 120% of gross domestic product.
When Sandu launched ambitious plans to renovate dilapidated housing, promote tourism and boost local incomes, it turned to brokers working with private fund managers, local financial exchanges and others. One prospectus to back construction of a road from Sandu’s high-speed rail station touted Guizhou’s fast growth, pictured idyllic mountain villages and offered up to 10% annual returns. The Wall Street Journal identified seven products packaged by private firms and sold to investors or on local financial exchanges. In some cases, a Sandu investment firm borrowed on behalf of the government in 2016, after Beijing had barred such practices.
Then, Sandu’s Communist Party secretary was removed in a bribery investigation, and the costs of the massive-scale projects began to fall due. The county missed its first payment in September, catching many investors off guard.
Sandu has its problems, but we can’t blame it. It’s the whole financial system, and how poorly regulated the private fund industry has been.
—Jiang Xiaqiu, a factory owner and investor
With courts lacking the power to enforce judgments on governments or state-backed companies, Ms. Jiang and other investors knew they would have to confront Sandu officials to get repaid, and started investigating the county’s finances.
Some were shocked to find how poor Sandu is: Its revenue totaled 712.3 million yuan in 2017, a fraction of that in big cities. They were also stunned by the scale of construction in Sandu and how much lay incomplete.
On their repayment quest, some of them visited an abandoned outdoor stadium, an Olympic-scale sports center with a horse-racing track, and a building that looked like an unfinished Roman Colosseum with concentric circles of cement arches. At a sprawling hotel, amphitheater and indoor basketball complex that was collecting dirt and rain, construction workers complained about not being paid. 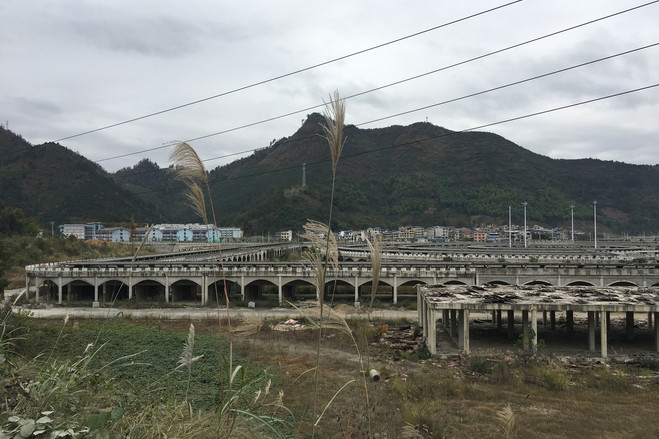 An unfinished Roman Colosseum-like structure; Sandu locals don’t know what the government planned to use it for. PHOTO: CHAO DENG/THE WALL STREET JOURNAL
Mr. Wu, the deputy propaganda chief, declined to comment on specific projects. He said the county of roughly 400,000 people is now focused on alleviating poverty, a national priority. Its goal by 2020 is to eliminate poverty—defined by the government as living on less than 95 cents a day—from 17% in 2017.
The investors trying to get their money back found themselves largely stymied. Officials shunted some of them into different offices, trying to reduce the numbers in a conference room where Mr. Jian, the local asset manager, was outnumbered.
“We are being trampled to death by you guys,” said an investor from the provincial capital. Another investor said: “Can’t you go hungry and just pay?” Mr. Jian chain-smoked and looked at his two mobile phones.
Liu Min, a private fund manager from Shanghai in a white overcoat carrying a Louis Vuitton handbag, had raised millions of yuan for Sandu by selling its debt to high-net-worth clients. After a futile meeting with two lower-level officials, she went to the office of Sandu’s party secretary. Getting no clear answer, she left town.
Days later, a 500,000-yuan ($74,400) transfer came through, followed by 700,000 yuan in January, making up for her overdue interest. As for 20 million yuan in principal her company is due this March, she expects to be forced into a delayed repayment plan.
“I guess they’ll want us to talk to our clients about an extension,” she said. “They really don’t have the money.”
Written by Joseph Belbruno