The death of the prominent Uighur writer Nurmuhammad Tohti after being held in one of Xinjiang’s internment camps has been condemned as a tragic loss by human rights organisations.
Radio Free Asia reported that Tohti, who was 70, had been detained in one of the controversial “re-education” camps from November 2018 to March 2019. His granddaughter, Zorigul, who is based in Canada, said he had been denied treatment for diabetes and heart disease, and was only released once his medical condition meant he had become incapacitated. She wrote on a Facebook page for the Uighur exile community that she had only learned of his death 11 days after it happened because her family in Xinjiang had been frightened that making the information public would make them a target for detention.
Another granddaughter, Berna Ilchi, told Voice of America that she did not know if Tohti had died inside the camp or at home because her family feared their phone was tapped. “The truth is that they put a 70-year old man with diabetes and heart disease inside a concentration camp and they cannot deny this,” she said.
Tohti’s grandson Babur Ilchi confirmed on his Instagram account – now deleted – that his grandmother had told him the news, reported Radio Free Asia. “Shortly after the call, my grandma received a message from the Chinese government saying she had answered a foreign call and that that was a dangerous decision. What did she do other than tell us he had passed away? Why should that be met with consequences?” he wrote.
“He was a respected writer; no affiliation with terrorism, which is what the Chinese government claims these concentration camps are fighting against. He deserved better, and so do the MILLIONS of Uighurs who are suffering in these camps.” 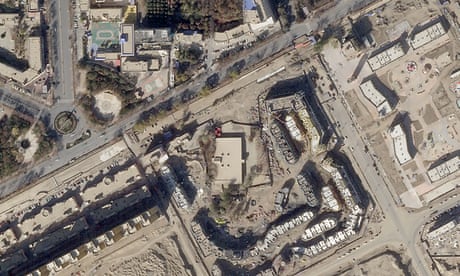 Revealed: new evidence of China's mission to raze the mosques of Xinjiang

Read more
China initially denied the existence of the camps in the far western region of Xinjiang, which is home to about 12 million Muslims. But last year, it began rebranding them as “free vocational training”; a BBC report on Tuesday showed a teacher describing inmates as “affected by religious extremism”, and saying that the purpose of the camps was “to get rid of their extremist thoughts”. It is estimated that a million Uighurs and other Muslims are currently detained.
PEN America’s director of free expression programmes, Summer Lopez, said: “The inhumane treatment reported at the internment camps is a grave illustration of the severity of China’s violations of free expression. Tohti’s death is a tragic loss to the Uighur literary community, at a time when the government is attempting to abolish their cultural and intellectual life.”
Written by Joseph Belbruno