HONG KONG POLICE ARE VERMIN THAT WE SHOULD KILL WITHOUT ANY PITY WHATSOEVER!

I wrote only two days ago that I abominate thugs from the bottom of my being. I have never envisaged killing another human being - except... Except where thugs are involved. I will be entirely candid: if I were confronted with scenes such as the ones where police, as reported below, attack innocent Hong Kong people at a subway station, I swear to God and any other divine entity that I would empty a machine gun on these filthy thugs. - Kill them without any semblance of remorse. Slaughter them before my eyes and, if I had time and means, crush and shatter every cell of their disgusting being. It is lucky for both me and Hong Kong police that I am not there...

Hong Kong: The video footage that flooded social media and television screens was harrowing: passengers cowering on the ground inside a train carriage, huddling and hugging each other.
Black clad special forces police storm through the train, wielding batons. More police, dubbed “raptors” by Hong Kong’s protest movement, stand at the doorways of the carriage - the only escape route - and spray pepper spray directly at screaming passengers.
A station announcer calls out repeatedly that it is an emergency.
More video shows police striking a protester already on the ground, squashed beneath a scrum of police knees. When they realise a South China Morning Post reporter is videoing the scene, they try to block his camera.
Passengers with bleeding head wounds emerge from a train and are bandaged by medics. Rows of people are lined against a wall on the concourse to have their hands bound with cable ties. Medics are also forced to face the wall. Then the shutters come down, police evict medics and journalists.
These scenes, at MTR stations at Prince Edward and Yau Ma Tei around 10pm on Saturday evening, dominated Hong Kongers conversations the next day. The subway stations remained closed. People said they were horrified. MTR stations are middle class Hong Kong’s hallowed ground - efficient, clean, safe. Shopping malls and apartments tower above many stations.
On the opposite side of Hong Kong’s harbour, a mass protest by tens of thousands of democracy activists had descended into clashes with police earlier in the evening, as petrol bombs were thrown at a government office and police deployed water cannons, tear gas and rubber bullets to clear the streets.
Hong Kong lawyer and commentator Kevin Yam says each weekend seems to provide a more likely excuse for Carrie Lam to enact emergency legislation, as the government not only fails to stop street protests but more importantly loses the battle for the Hong Kong public’s hearts and minds.
"If we look back over the escalation of violence in the last month there is one consistent pattern - when there is a hardcore of protesters that go a little bit too far with their actions, the police always respond with action that goes way further than the protesters.”
"Every time the police squander the opportunity for the government to turn public opinion around.”
Yam, who is a former head of the Hong Kong Progressive Lawyers Group and grew up in Melbourne, says the government tactics in the past three days - arresting opposition party politicians and high profile youth activist Joshua Wong, cancelling authorised protests, and the storming of the subway stations  - appeared to be an attempt to “arrest people into submission”.
The police force said on Sunday that 40 people had been arrested at Prince Edward station alone.
But Yam said that tactic backfires in an environment like Hong Kong where there is a free flow of information and the public can see in detail how police are dealing with protesters.

As the footage of police using batons to hit protesters inside multiple subway stations, chasing passengers inside train carriages with pepper spray, was shown on live video streams on television and the internet on Saturday, the reaction on social media was shock.
Police said the next day the images of passengers - not wearing black - being hit with batons could be explained by them possibly being protesters who had changed into plain clothes. There was no proof of this.
Pro-democracy politician Claudia Mo said on Sunday: “It was blatantly clear through press footage and photos, yet police would still dare to deny that such happenings have ever taken place, that the police were beating up ordinary citizens most indiscriminately.”
Charles Mok, the Legislative Councillor representing the technology sector, called the police “thugs” on social media and warned “the situation is very urgent and dangerous”.
Mok has strongly urged Lam’s government not to use emergency laws and internet companies have warned any attempt to curb internet use through such a law would threaten Hong Kong’s role as a financial hub. 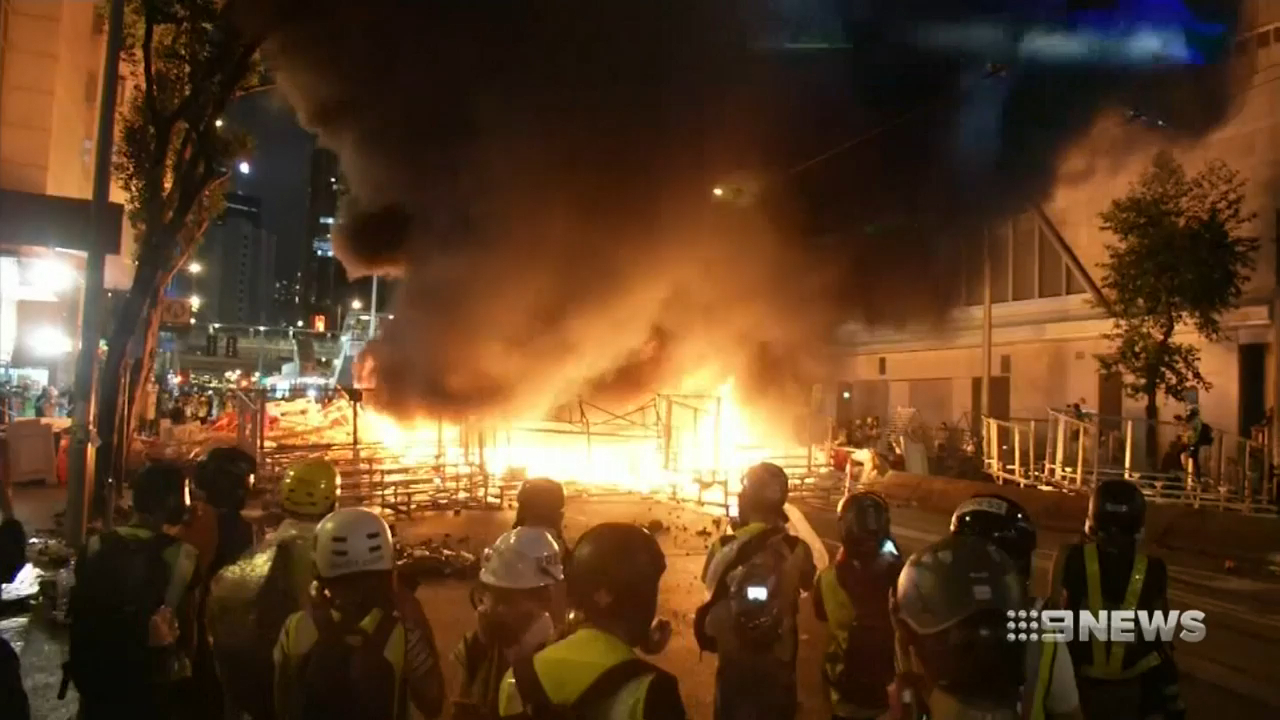 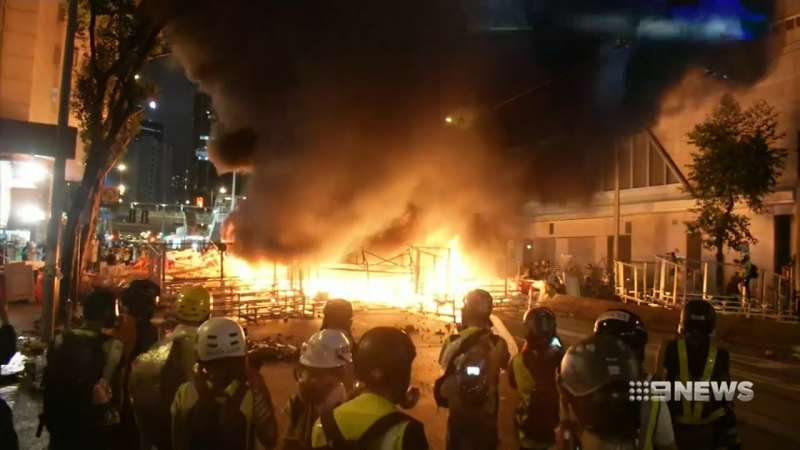 Thousands marched, blocking roads and starting fires as protests in Hong Kong entered a thirteenth weekend.
With Lam refusing to respond to protester’s demands with even the simplest action - formally withdrawing an extradition bill she has said won’t proceed - the cycle of violence in Hong Kong appears set to worsen.
When asked if she supported the use of Molotov cocktails, one protester told The Sydney Morning Herald and The Age the crude bombs were being thrown because police continued to act with violence.
Saturday showed the wider public continues to turn up on the streets to support the protesters.
Authoritarian Beijing - believed to be behind Lam’s refusal to negotiate - is simply not equipped to deal with a political crisis involving a population educated in human rights and civil liberties who refuse to be cowed.
Written by Joseph Belbruno