RATS POLLUTING THE EARTH - An instance of Absolute Exploitation

In Tougher Times, China Falls Back on Coal

As worries mount over a slowing economy and energy security, coal use has climbed despite Beijing’s claims to be leading climate-change fight

REUTERS
By
Stephanie Yang
Dec. 23, 2019 10:31 am ET
BEIJING—China’s efforts to wean itself off coal are losing steam, as the world’s biggest carbon emitter is putting economic growth and energy security above its ambitions to be a leader in combating climate change.
Coal consumption is back near peak levels after rebounding over the past three years, despite China’s pledges to make steep cuts in what is the country’s most prevalent and polluting source of energy. The country is building more coal-fired plant capacity than the rest of the world combined.
Infrastructure stimulus measures to offset the impact of the prolonged trade war with the U.S. have boosted consumption, while Beijing has taken a softer stance on coal use after a missile attack in September on Saudi Arabia, China’s biggest source of oil imports, underscored the country’s reliance on foreign energy.
The renewed focus on coal has raised doubts among analysts over China’s commitment to cutting carbon emissions and frustrated the European Union, which has leaned on China to uphold the Paris Agreement since President Trump pulled the U.S. out in 2017. While China is on track to meet its goals through 2020 and 2030, its mixed signals on coal suggest Beijing is less willing to pursue green-energy goals and join the EU in setting more ambitious emission targets.
“China was seen, particularly by the developing and emerging economies, as the leader, saying look at all the wonderful stuff we’re doing,” said Philip Andrews-Speed, senior principal fellow at the Energy Studies Institute at the National University of Singapore. But the country has continued construction on new coal plants even as it aims to phase out the fossil fuel, he said: “There’s a deep contradiction in this.”
In an October speech at a National Energy Commission meeting, Premier Li Keqiang called for the development of the coal industry to ensure energy security. The remarks were widely seen as a shift from previous statements and a sign that the government is backing off its anticoal message.
Efforts to boost the economy through infrastructure investment have also driven overall consumption higher, analysts said.
China’s steel output reached a record high of 750 million metric tons in 2019, but will likely come back down in 2020 as housing construction slows, according to Fitch Ratings associate director Charles Li. Data from the Centre for Research on Energy and Clean Air show that coal demand has increased by 7% and 11% in metals and chemicals sectors, respectively, this year through October. Its use to produce cement and glass have also increased.
“China had a very genuine claim to being a leader on climate change,” said Lauri Myllyvirta, lead analyst at the Centre for Research on Energy and Clean Air. “Now that there has been a domestic shift, that’s harder to portray.”
In 2014, China and the U.S. agreed to coordinate on carbon-emission cuts in an effort to propel international negotiations. That year, coal consumption fell for the first time in China after peaking in 2013.
“Climate was seen as a key positive area of the relationship between China and the United States and that really gave it additional priority,” Mr. Myllyvirta added.
After Mr. Trump announced the U.S. withdrawal from the Paris Agreement, China initially positioned itself as an emerging leader in the efforts to combat climate change. But without the same pressure from the U.S., analysts said, China’s commitment has waned in the face of other economic and political challenges.
One knock-on effect of the trade war between the U.S. and China is an increased emphasis on pursuing energy independence, which has likely contributed to support for coal, said Erica Downs, senior research scholar at Columbia University’s Center on Global Energy Policy.
“If there are broader concerns about energy trade and being reliant on imports, there’s comfort in coal,” Ms. Downs said.
China’s import dependency on oil reached 72% last year, the highest in the past 50 years, according to BP’s 2019 Statistical Review. Oil imports climbed to a record high in November, according to ship-tracking firm Kpler, with much of the increase coming from Saudi Arabia.
China’s reliance on Saudi Arabian oil has grown as its other sources of imports have been squeezed by U.S. sanctions on Iran and Venezuela and the continuing trade war, which has affected U.S. imports.
China is also expected to become the world’s largest importer of natural gas in 2020. The country has pushed aggressively to transition into cleaner-burning fuels and clear its skies of pollution, at times falling short of the supply needed. In 2017, some residents and factories in northern China were left without heating and fuel in the middle of winter. 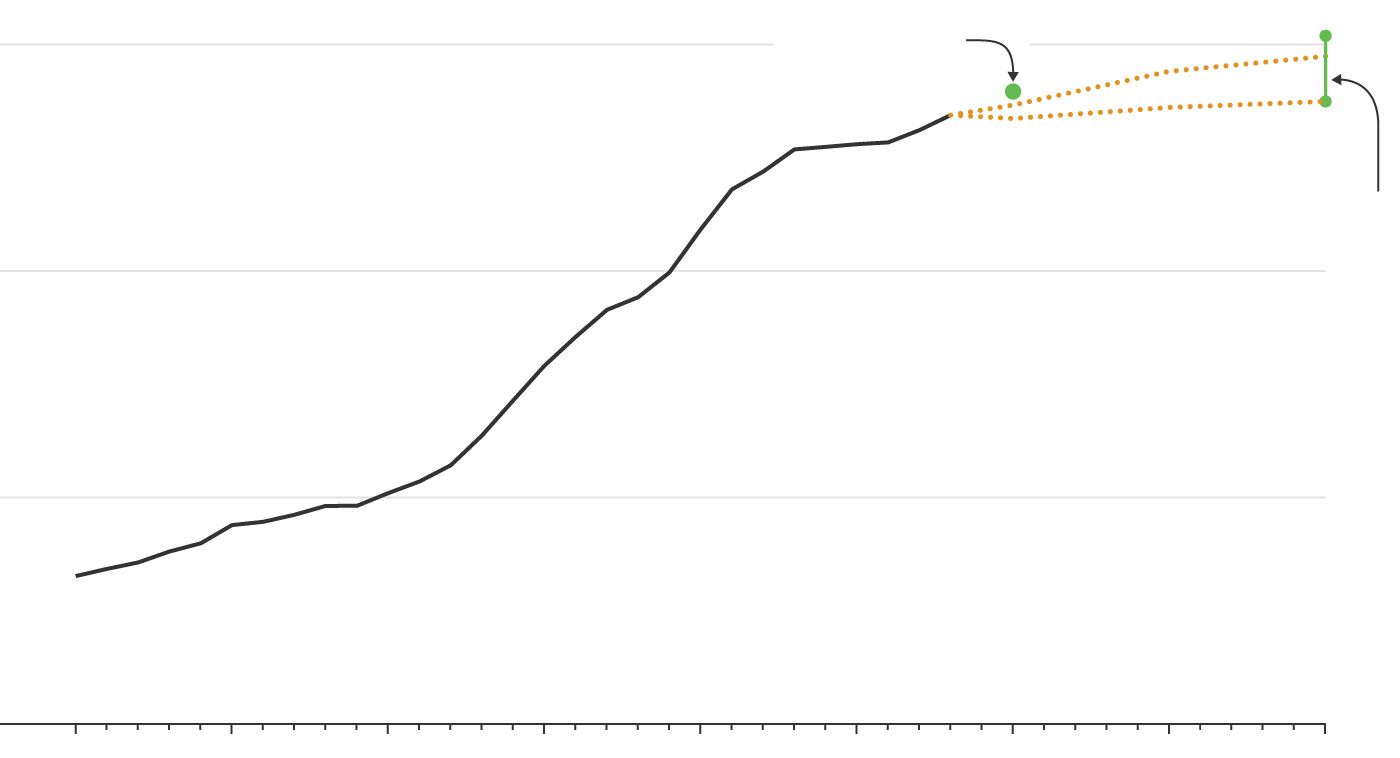 15,000
metric tons of carbon dioxide equivalent
2020 pledge
13,963 mtco2e
Current policy projections
2030 pledge
13,744-15,194 mtco2e
10,000
5,000
Historical emissions,
excluding forestry
0
1990
’95
2000
’05
’10
’15
’20
’25
’30
A new natural-gas pipeline from Russia, the Power of Siberia, began delivering natural-gas supplies to China’s northeast in December. But the project will be hard pressed to satiate China’s natural-gas demand alone, particularly in its inaugural year. Russia’s gas fields will be able to deliver about 8 billion cubic meters of natural gas in 2020, but that would satisfy only about a fifth of China’s new energy demands next year, according to estimates from Sublime China Information, a commodities consulting firm.
While China’s coal use has rebounded in recent years, its share of the energy mix reached a historic low in 2018 of 58%, compared with 72% a decade ago, according to BP PLC’s 2019 Statistical Review. That is in part due to Beijing’s heavy investments in renewable energy sources, which has helped China meet its Paris Accord targets. Renewables represent less than 10% of China’s energy mix, but their use grew by 29% in 2018, accounting for nearly half the world’s growth.
At the United Nations Climate Change Conference in Madrid earlier this month, the head of the Chinese delegation and vice minister of China’s Ministry of Ecology and Environment told state media all countries need to work together to fulfill the Paris Agreement and address climate change.
But the summit ended without an agreement the EU had sought to strengthen emissions targets or advance plans for a carbon-trading system, after the EU clashed with China and other developing countries.
“You have this balancing act going on,” Ms. Downs said. “They’re still committing to cleaning and greening the energy mix, but it’s not always a linear progression.”
A November report from Global Energy Monitor, an anti-fossil-fuel nonprofit, highlighted China’s investment in coal-fired power plants. The amount of coal-power capacity under construction in China exceeds the rest of the world combined, the group said, though much of the build-out is a continuation of coal-fired plants that were permitted before 2017.
Clean-energy advocates are looking to the government’s next five-year plan, to be released in 2020, for a clear sign on China’s coal trajectory and commitment to fighting climate change.
“China’s at this really important inflection point,” said Alvin Lin, climate and energy policy director for the China program at the environmental advocacy Natural Resources Defense Council. “We need more policy direction to guide us in the right way.”
Write to Stephanie Yang at stephanie.yang@wsj.com
Written by Joseph Belbruno