OBAMA! YOU UGLY BLACK BASTARD ! THIS IS WHAT YOU SHOULD HAVE DONE 12 YEARS AGO, YOU MISERABLE GOOF!

Coronavirus may accelerate trend to move supply chains away from China

David Smith
Wednesday February 12 2020, 12.01am GMT, The Times
This is a time when people in business, and in financial markets, turn their attention from economic statistics to medical ones. The coronavirus outbreak in China has put a brake on optimism in the markets and provided a counterweight to hopes in January that this would be a better year for the global economy.
Optimists looking at the figures would cite the fact that the number of new cases in China appears to have peaked. Tie that to the fact that we will move into warmer weather in the weeks ahead and there is reason to hope that the impact will be limited.
Pessimists would question whether the recording system is all that it should be. They would note the record daily death toll this week, which took China’s total to more than 1,000, and fret about “super-spreaders” capable of bringing the virus from Singapore to Brighton via a French ski resort. Some businesses have pulled their staff out of attending conferences, not only in the Far East.
There will be a short-term economic effect from the coronavirus outbreak. When production is shut down, as it was in parts of China, delaying the return to work after the Chinese new year, there is a hit to growth that is rarely made up later. China will suffer significantly weaker growth in the first quarter, perhaps no growth at all or a fall in gross domestic product.
China’s growth is likely to start with a “5” for the first time in a very long time. Standard & Poor’s, the rating agency, thinks that it will be only 5 per cent, from 6.1 per cent last year. Last year’s growth was the weakest since 1990. As things stand, growth in the People’s Republic this year is unlikely to drop below the 1990 low of 3.9 per cent, though that depends on the progress of the outbreak.
How big will the impact be on the global economy? This has come at a bad time for China, already reeling under the impact of President Trump’s trade war. It is also a bad time for global industry, the weakness of which has hit manufacturing nations such as Germany. Global manufacturing faces a double hit from a weaker Chinese market and the disruption of supply chains that rely on factories in China.
As Oxford Economics puts it: “A sharp drop in the country’s industrial activity may cause substantial supply-side disruptions elsewhere. We expect global industrial production growth of just under 1 per cent this year.” The latest UK figures show a third quarterly decline in manufacturing output, which dropped by 1.1 per cent in the final quarter of last year.
What about the wider economic impact? Some have taken to quoting a 2013 World Bank study that estimated a global pandemic could reduce world gross domestic product by as much as 5 per cent, a big shock. That, however, was the potential impact of a pandemic on the scale of the 1918-19 Spanish flu outbreak, which killed 50 million. The 2009 influenza pandemic had a much lower death toll, no more than 400,000, and an impact on the global economy of 0.5 per cent or less at a time when there was so much else going on it was hard to notice.
That is the order of magnitude we should be thinking of now. Optimists would say that the impact on global growth will be barely detectable, perhaps 0.1 percentage points, while pessimists would say 0.5 points. A reasonable middle ground would be that coronavirus could knock 0.2 or 0.3 points off a global growth rate that was expected by the International Monetary Fund to recover from 2.9 per cent in 2019 to 3.3 per cent this year.
This is the short-term impact. Could there be a longer-term impact? Businesses, on finding themselves vulnerable to disruptions in Chinese supply chains, may just have found another reason to shift elsewhere.
What a new report by Bank of America describes as “tectonic shifts” in global supply chains was already happening before the coronavirus outbreak. The starting point for its analysis is a rise in China’s global industrial production share from virtually nothing three decades or so ago to more than 30 per cent now, mirrored by drops in Europe’s and America’s shares.
Now, however, things are changing. Part of the immediate motivation for moving supply chains away from China has been the trade war. The motivation for locating production in China — low labour costs — has been eroded both by the rise of those costs in China and by automation. Add that to other factors and something significant is happening. 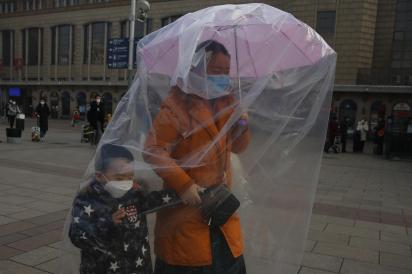 The spread of the coronavirus has put pressure on China
EPA
“What is striking is that there are so many reasons why companies are re-assessing their supply chains,” the report says. “Some reasons are financial, but not all. On the financial side, tariffs are obvious, but newer automation has also meaningfully narrowed the labour cost differential that made the original outsourcing so attractive, and, in addition the tax arbitrage has narrowed. National security is a growing factor, as are the concerns of high carbon footprints associated with long supply chains and potentially problematic employment practices.”
The beneficiaries of this shift, which Bank of America emphasises is moving slowly so far, are other countries in southeast Asia, the United States itself — which is starting to benefit from the “reshoring” of previously “offshored” industrial production — and India.
The head of India Inc, which promotes business ties between India and the rest of the world, saw direct opportunities in the coronavirus outbreak. “The disruption of global supply chains is a direct fallout of the world’s overdependence on Chinese factories to produce them,” he wrote. “This crisis will nudge the world to diversify its bets. Many of them will, doubtless, consider India as an alternative destination.”
Could Britain benefit from some “reshoring” of manufacturing activity? It has been talked about for some time. At present, UK manufacturing is struggling to hold on to what it has got. That could change, though there is little sign of it so far.
David Smith is Economics Editor of The Sunday Times david.smith@sunday-times.co.uk
Written by Joseph Belbruno