US aircraft carriers are practising war in the South China Sea. China’s navy is doing the same. What could possibly go wrong?

2 comments
news.com.auJULY 12, 20205:26PM
Pressure is mounting for Australia to get involved in the South China Sea conflict.
The threats are flying thick and fast in the South China Sea.
Beijing’s state-controlled Global Times news service declared: “Any US aircraft carrier movement in the region is at the pleasure of the PLA (People’s Liberation Army).”
The US Navy’s chief of information retorted: “And yet, there they are. Two @USNavy aircraft carriers operating in the international waters of the South China Sea.”
Beijing insists the waterway bounded by Vietnam, Malaysia, Indonesia and Taiwan is its sovereign territory. The UN disagrees. Washington demands that existing freedom of navigation rights through the strategically important sea remain unchanged.
Beijing has built up a chain of artificial island fortresses in the Paracel and Spratly Islands. It’s been holding regular large-scale naval exercises there, the latest kicking off last week.
Washington has just sent a battle group centred on two enormous nuclear-powered aircraft carriers into the same waters. They’re also engaged in war-games. And satellite photos reveal that it too has begun to expand and strengthen a Pacific island base. 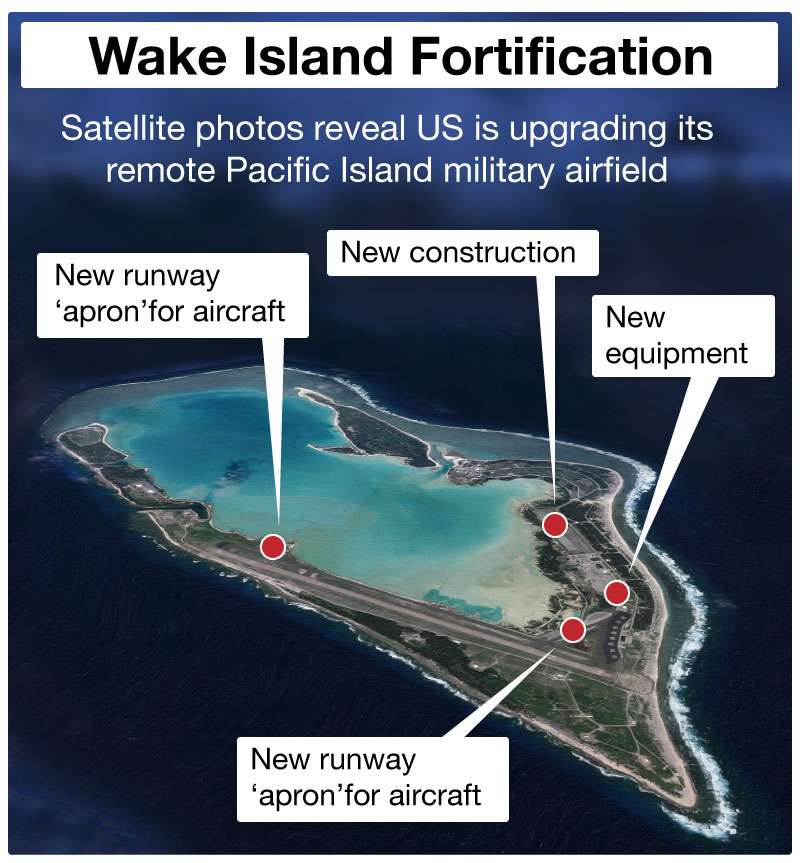 WAKE ISLAND REVIVED
It’s just a pinprick on a map – a coral atoll roughly halfway between Hawaii and Japan.
Together with Guam, these islands form a chain of air and naval bases between the United States and Asia.
Wake Island was the scene of fierce fighting between the US and Japan in World War II. It represented a strategic outpost. A rest, refuel and repair post in the middle of a vast ocean.
Its importance has been revived as North Korea and China push tensions in Southeast Asia towards breaking point.

Wake Island is a mere dot on a map in the Pacific Ocean but it’s a pivotal US outpost. Picture: Google MapsSource:Supplied
Hawaiian news service KITV4 last year reported a US military source as confirming “a lot of changes happening on that small atoll”. The US Air Force was “pouring a lot of investment into the infrastructure and the contracted support to that location,” including operations and accommodation facilities.
Tyler Rogoway writes in The War Zone that satellite photos taken as recently as last month now reveal the island is undergoing some major renovations.
“Beyond its clear logistical utility, acting as a major hub where there isn’t another for thousands of miles, it sits outside the range of China’s and North Korea’s medium-range ballistic missiles, and largely at the end, if not entirely out of range, of their intermediate-range ballistic missiles (IRBMs),” writes Rogoway.
At Wake Island’s core is a 3km-long runway. It’s a stopover point for military aircraft. It’s also an emergency airfield for airliners experiencing troubles.
Now, aircraft parking and handling aprons appear to be in the process of being enlarged. There’s a new solar power facility. And new construction activity appears to have commenced among the island’s fuel farm and accommodation district.
The upshot, Rogoway argues, is a refuge for combat aircraft. US bases at Okinawa and Guam are well within Beijing’s and North Korea’s cruise and medium-range ballistic missile envelope. Wake Island, however, is harder to reach.
“So, you can see how Wake Island quickly becomes a key fallback position during what could be an incredibly violent and fast-moving conflict, at least at first,” he writes.
SOUTH CHINA SEA STANDOFF
Gunboat diplomacy is in full swing in the South China Sea.
The United States has deployed two aircraft carriers in a display of strength. A third carrier is lurking nearby.
The USS Nimitz and USS Ronald Reagan are showing off their combat technology, skills and capabilities inside the South China Sea. The USS Theodore Roosevelt is also in the Western Pacific.
Nearby, among the Paracel Islands jointly claimed by Beijing and Hanoi, Chinese warships are busily conducting live-fire missile practice.
A US Navy statement said the aircraft carriers were there to “support a free and open Indo-Pacific”. But the implicit threat is obvious.
“The purpose is to show an unambiguous signal to our partners and allies that we are committed to regional security and stability,” Rear Admiral George Wikoff told the Wall Street Journal.
The US aircraft carriers, operating with at least four other warships, are demonstrating their capacity to sustain a high-level of operations “around the clock”.
“High-end integrated exercises build unmatched flexibility, endurance, manoeuvrability and firepower in an all-domain warfighting environment,” a spokesman for the USS Reagan Carrier Strike Group declared. These efforts support enduring US commitments to stand up for the right of all nations to fly, sail, and operate wherever international law allows.”

Aircraft from Carrier Air Wing 5 and Carrier Air Wing 17 fly in formation over the Nimitz Carrier Strike Force in the South China Sea on July 6. Picture: US Navy/Mass Communication Specialist 3rd Class Keenan DanielsSource:Supplied
Beijing issued its response through the Global Times.
“China has wide selection of anti-aircraft carrier weapons at South China Sea,” it declared. “The South China Sea is fully within the grasp of the Chinese People’s Liberation Army (PLA), and any US aircraft carrier movement in the region is solely at the pleasure of the PLA, which has a wide selection of anti-aircraft carrier weapons like the DF-21D and DF-26 ‘aircraft carrier killer’ missiles.”
UNBRIDLED ANGER
On Thursday last week, the US Defence Department declared the Chinese exercises around the Paracel Islands to be “the latest in a long string of PRC actions to assert unlawful maritime claims and disadvantage its Southeast Asian neighbours in the South China Sea”.
Washington has been increasingly outspoken about Beijing’s territorial assertiveness in the region, highlighting the illegality of its man-made islands and the military nature of their airfields, hangars, missiles and radars.

A photograph taken from the International Space Station appears to show China building on the reef in the Paracel Islands. Picture: NASASource:Supplied
Nations including Japan, Vietnam, the Philippines and Australia have expressed concern that combat aircraft and ships could quickly be deployed to these facilities in order to obstruct the $5 trillion in annual global trade that flows through its arterial shipping and air routes.
Beijing, however, is attempting to deflect the message.
The military exercise was a “flexing of muscles by some non-regional country that lies tens of thousands of miles away,” the Global Times quotes Chinese Foreign Ministry spokesman Zhao Lijian as saying.
But, in a separate editorial, CCP appointed deputy director at the Shanghai Academy’s Institute of Social Sciences Li Kaisheng concedes the show of strength may ‘embolden’ Vietnam to assert its UN-backed territorial rights.
“US navigation in the region may boost Vietnam’s confidence to adhere to its claims in the South China Sea,” he writes. “Additionally, the US maintaining its military presence and deployment can be seen as supporting other claimants’ illegal (in Chinese courts only) claims over the South China Sea, which will negatively affect China’s sovereignty security.”
It ends with another threat to entrench Beijing’s UN-rejected territorial claims: “But when the US violates China’s sovereignty, territory or maritime interests (such as sailing within 12 nautical miles (22km) of Chinese territories), China must make tough and firm responses.”
Written by Joseph Belbruno