TV chat shows in China last week noted the rise in Apple’s equity value to $2tn, thanks in part to massive injections of liquidity from the US Federal Reserve. Participants debated whether such heights were sustainable.

It may have been more worthwhile to discuss how much further the valuations of China’s own tech giants — led by New York-listed Alibaba, up 25 per cent this year to a market capitalisation of almost $720bn — can continue to rise.

The challenges these companies face are not so much about their ability to execute on their strategies, but the extent to which they are victims of politics. Outside China, the likes of Tencent and Alibaba are increasingly constrained by rising tensions between governments. But it is within China, perhaps, that the greatest tests lie.

Chen Zhiwu, who heads the Asian Global Institute at Hong Kong University, notes that if privately run companies cross a certain threshold in valuation, they are seen to “represent a potential threat” to the Party. “In China economic power can potentially become political power. But if you are under that threshold, you are below the radar.”

As such, he says, there is a “ceiling” on these companies.

Several of the leading tech companies have seen their founders step back from prominent roles, prompting speculation that it is better not to be too visible if you run a thriving tech firm on the mainland. 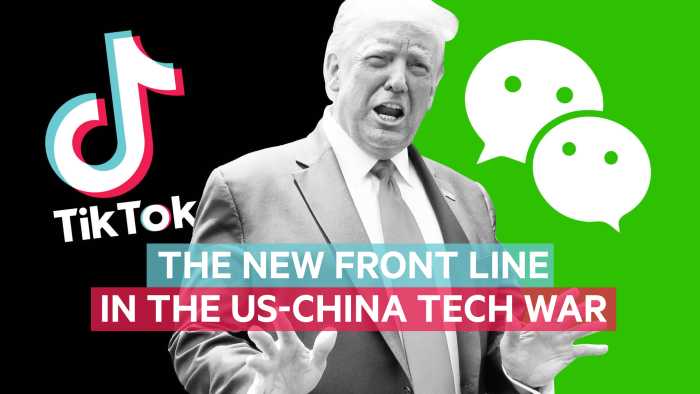 On the face of it, there are often sensible reasons for those decisions. At ByteDance, Zhang Yiming handed over the China CEO role in March to spend more time on global strategy. At Alibaba, people close to Jack Ma say he stepped back last year because it was always his plan to retire while in his fifties. Mr Ma’s arch rival in ecommerce, Colin Huang of Pinduoduo, took a back seat last month, but some investors believe he may return to his C-suite office before long.

But it is also true that the more they grow, the more these companies are drawn into the political maelstrom of the Party. As the payments businesses of Alibaba and Tencent got bigger, for example, they were mostly indulged by Zhou Xiaochuan, the ex-central bank governor who stood down in 2018. But today the People’s Bank takes a sterner view, according to people on both sides.

One senior executive at Ant Group, Alibaba’s payments business, says that top people at Alibaba held off from approving the group’s listing in Hong Kong and on Shanghai’s Star market, until they were sure they had Beijing’s support. It is worth noting, too, that these days Ant is stressing the collaborative nature of its interactions with China’s state-owned banks and traditional financial institutions, having largely abandoned its earlier talk of “disrupting” the status quo.

“Beijing has a very complicated relationship with its private entrepreneurs,” says the chief economist for the Hong Kong branch of one European bank. “It is very proud of them. But they are keenly aware of how powerful they have become. Alibaba and Tencent have clearly become too powerful. The government wants them to expand abroad — not at home.”

That is easier said than done. In theory, China’s geographical neighbourhood should be an attractive target for that expansion, given that Chinese models can be more in tune with south-east Asia and South Asia than US rivals. But even here, progress has been patchy. Indeed, it sometimes appears as if big markets are competing to see who can adopt the most anti-Chinese policies.

India, for example, banned dozens of Chinese mobile apps, including TikTok and Tencent’s WeChat, saying they presented a threat to national security. One investor leading the talks with US regulators over TikTok’s fate says negotiations took a “malignant” turn after that, as Washington did not want to appear more lenient than the Modi government.

And in the US, Ant was barred from acquiring MoneyGram on the grounds that financial data is too sensitive — thereby creating a precedent for other countries to adopt similar policies.

Daniel Zhang, Mr Ma’s successor as CEO of Alibaba, said on the company’s earnings call last week that globalisation was the group’s “long-term strategy.” But he admitted that “in the near term we are closely monitoring the change of the geopolitical environment, and also the national policy of other countries, and we will adjust our strategies according to this change”.

So at home they are under suspicion and abroad they are under threat. Shareholders may be waiting a while for a Chinese tech company to crack the $1tn barrier — never mind $2tn.