Hong Kong police have been strongly criticised over the rough arrest of a 12-year-old girl whose family says was caught in a protest crowd while out buying art supplies.

Video widely shared across social media and in Hong Kong media showed the officers seeking to corral a group of people including the young girl, who ducked aside and tried to run away. An officer tackled her to the ground, while several others helped to pin her down.

The arrest came amid the largest street protest seen in Hong Kong since 1 July, the first full day under the national security laws imposed by Beijing on the city, outlawing acts of sedition, secession, foreign collusion and terrorism. 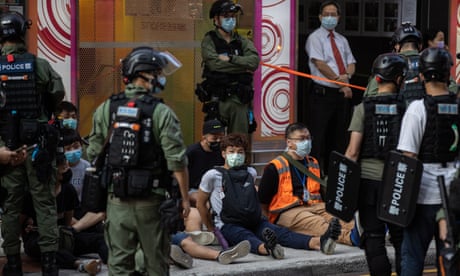 The girl’s mother told Apple Daily she intended to sue and lodge a formal complaint. She said her daughter and her 20-year-old son – who were both fined under the city’s pandemic-related laws against gatherings – were out buying art supplies, and that the girl ran away because she was scared. Her daughter was bruised and scratched after the encounter.

Claudia Mo, a pro-democracy legislator, said the actions taken towards the girl “shows how unnecessarily jumpy [and] trigger-happy Hong Kong police have become”.

In a statement a few hours after the incident, Hong Kong police confirmed the arrest of a 12-year-old girl, saying she had run “in a suspicious manner” and officers had used “minimum necessary force” to apprehend her.

“Police were concerned about youngsters participating in prohibited group gathering. Their presence at the chaotic protest scenes also endangers their own personal safety,” it said.

The Hong Kong police force has been contacted for further comment.

On Sunday night, the Hong Kong government said people had ignored advice from police not to participate in unlawful assemblies, risking anti-pandemic efforts and potentially breaching the national security law. The government “strongly condemn[ed] these unlawful and selfish acts”.

“Police discharged their rightful duties today and took prompt and decisive actions to apprehend the offenders.”

The liaison office for the central government accused protesters of seeking to “reignite war”, and accused them of having “a cold-blooded disregard for the lives and health of the general public” in breaching gathering bans.

The spokesman said since the implementation of the law “Hong Kong society had undergone a positive change from chaos to governance”, and said there would be “zero tolerance” for any violations.

Almost 300 people were arrested on Sunday, the vast majority for unlawful assemblies. About 2,000 police officers were deployed early in the day, ahead of the protests which had been planned by a coalition of pro-democracy groups to mark the day that Hong Kong’s elections were supposed to be held.

Carrie Lam, Hong Kong’s chief executive, announced in July the elections would be postponed for one year because of the danger of Hong Kong’s most recent Covid-19 outbreak, but was accused of using the pandemic to silence opposition. Many protesters also called for the release of 12 people arrested by Chinese coastguards while attempting to flee by boat to Taiwan.

Senior superintendent Li Kwai-wah said the squad was leading the investigation because of earlier suspicions that Tam had breached article 21 of the national security law, criminalising “incitement to secession”.

Tam’s words had “brought into hatred and contempt of the government and raised discontent and disaffection among Hong Kong people”, Li said.

At least 25 people have been arrested under the national security law so far, although just one has been charged.

The law has provided authorities with the means to widen the scope of their crackdown on dissent in Hong Kong, and has created a chilling effect across academia, media, and pro-democracy members of the public.

In the past month, newspaper offices have been raided, academics removed from their posts, and books regarded as be problematic removed from shelves or altered. Restaurants and shops have torn down “Lennon walls”, where people stuck up post-it notes with pro-democracy messages, and some politicians and activists have fled overseas.

The law’s articles are so broadly defined they have been found to potentially violate numerous international laws, UN groups said last week.

Media organisations have warned there is little clarity about whether standard acts of journalism – such as quoting someone advocating for independence – would put them in breach of the law, and some outlets have removed such content from online platforms. Visas for foreign journalists have also been delayed or outright denied.