PALAU—The Republic of Palau has asked the Pentagon to build ports, bases and airfields on the island nation, officials said, offering a boost to U.S. military expansion plans in Asia, as Washington aims to counter China.

The request came during a visit here last week by Defense Secretary Mark Esper, the first-ever trip by a U.S. Pentagon chief to the tiny republic, which is made up of hundreds of islands in the Philippine Sea and is closely aligned diplomatically with Taiwan.

Mr. Esper traveled to Palau as part of a U.S. effort to realign its military footprint in the region, adhering to the 2018 National Defense Strategy, which calls for enhanced steps to meet security challenges posed by China.

Beijing has moved to lay claim to islands in the South China Sea, a major global trade route. China also has increased jet-fighter flights near Taiwan, fought a border skirmish with India and passed a national-security law to limit Hong Kong’s autonomy.

Contesting Chinese maritime claims, the U.S. conducted a so-called freedom-of-navigation operation Aug. 27, sending the USS Mustin, a U.S. Navy destroyer, into the South China Sea, among a number of other such operations. The Mustin also transited the Taiwan Strait earlier last month, and B-2 stealth bombers and B-1 heavy bombers conducted a combined exercise with Australia last month, demonstrating their capabilities in the region. 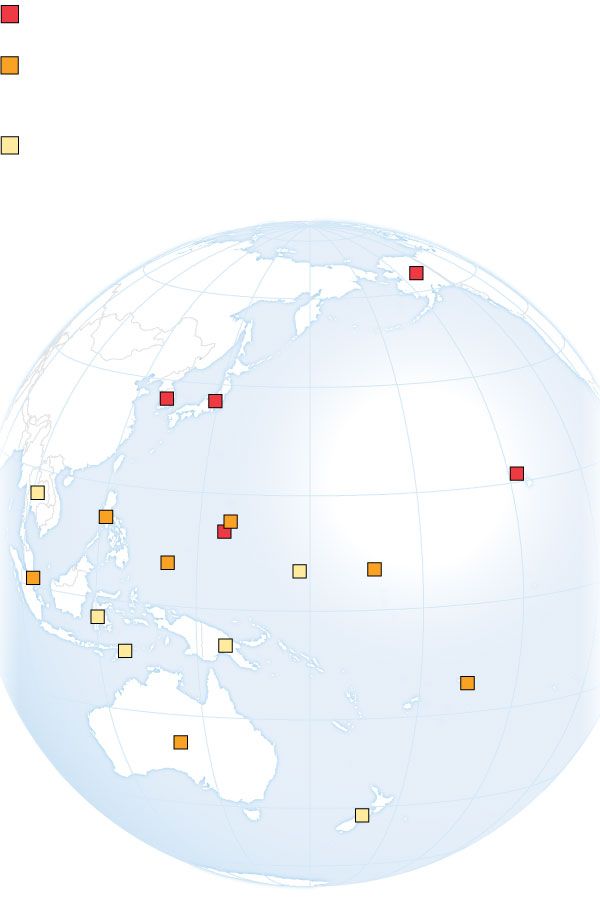 One or more military bases

Permanent or regular presence; no fixed military base

U.S. presence, rotating troops, or other activity with no current or fixed personnel assignment

Beijing responded with its own exercises, launching four medium-range ballistic missiles from mainland China into an area inside the South China Sea between Hainan Island and the Paracel Island chain.

The U.S. is on the hunt to build or reinforce partnerships with other countries to help counter those illegal claims, blunt other expansionism and send a signal that the U.S. is committed to the region.

Palauan President Tommy Remengesau Jr. visited the White House last year with counterparts from Micronesia and the Marshall Islands, adopting a joint statement on security in a show of unity.

Last week, Mr. Remengesau handed Mr. Esper a letter requesting that the U.S. enter into a broader, longer-term relationship with the island nation, where the U.S. has had a small but permanent presence for decades. The Palauans said they think the republic has been underused by the U.S. military for years.

“Palau’s request to the U.S. military remains simple—build joint-use facilities, then come and use them regularly,” according to a copy of the letter reviewed by The Wall Street Journal.

The letter, while not spelling out details, indicated that the Palauans were willing to allow the U.S. to host bases, construct port facilities, build airfields and host more troops.

U.S. officials haven’t said how they will respond but have said they are eager to build relationships with partners in the region and that Palau’s invitation would be well received.

“The government of Palau is not only receptive but is enthusiastic about the United States military broadening and deepening its operations, exercises and training in and around Palau,” said Heino Klinck, deputy assistant secretary of defense for East Asia, in an interview.

U.S. security policy in Asia calls for a heavier presence of American forces, but on a rotational basis, whereby troops switch in and out for training and exercises. Such an arrangement would be in contrast to the kind of heavy presence that is a hallmark of U.S. military deployments in Japan and South Korea. “Our philosophy is, we want access to places instead of permanent bases,” Mr. Klinck said.

How best can the U.S. use its military resources in the Pacific? Join the conversation below.

Mr. Esper last week heralded a runway project in Palau undertaken by U.S. troops. A team of Navy Seabees, members of a construction battalion, cleared vegetation and overgrowth through tropical forest here to extend an airstrip for U.S. military and other aircraft to land, expanding America’s strategic reach into China’s backyard.

The improvements allow C-130 turboprop transport aircraft to land in Palau, improving U.S. military access to the region. The first such transport touched down earlier this month, defense officials said.

“These are minor muscle movements that could lead, eventually, to a major muscle movement,” said Mr. Esper, after a visit here last week. “So you get small teams like this out there doing the groundwork, forging the diplomacy.”

Mr. Esper, who last year became Mr. Trump’s third defense secretary, has pushed to enact elements of the National Defense Strategy to realign the Pentagon’s troops, capabilities and bandwidth toward China. But ongoing conflicts in the Middle East and Afghanistan have complicated his effort to shift focus to Asia.

Palau, like Pacific nations Micronesia and the Marshall Islands, holds an agreement with the U.S. known as a compact of free association. It brings benefits like those afforded to U.S. territories, while the compact countries retain independence from the U.S. The compact with Palau is under negotiation for renewal by the end of the year, officials said.

The U.S. ambassador to Palau, John Hennessey-Niland, said he looked forward to deepening relationships with the Palauans, as the U.S. and the republic negotiate the compact and determine how Washington’s defense relationship can grow stronger.

“Palau is a very important place in the Pacific,” he said in an interview. “Palau has suffered from predatory economic behavior and malign influence from the PRC,” he said, referring to China. “Palau is a good friend of the United States and a great partner in the Pacific.”

Although the U.S. once fought the Japanese in and around Palau during World War II, the region now is bringing together “like minded” countries, including Japan, to counter Chinese influence, said a senior U.S. military official. The U.S. is also working to improve ties in the region with the Philippines, Sri Lanka, Thailand and others.

Some countries that had been wary of challenging China militarily are opting to work with the U.S. now, the official said, citing increasing participation by other countries, including Australia, in freedom-of-navigation operations.

“They are realizing the [People’s Republic of China] is very directly working coercion in and around the South China Sea and the Indo-Pacific. And I think they are opening up to have this ability to be part of this group, more visibly than just in rhetoric,” the official said.