London: Britain could boycott the 2022 Beijing winter Olympics in protest against the Chinese government's human rights abuses against Uighur Muslims in Xinjiang.

Britain's position, revealed by Foreign Secretary Dominic Raab, increases pressure on Australia to also place a boycott on the table.

Raab did not rule out a boycott when asked about a growing push to abandon the games at a parliamentary committee hearing.

"Generally speaking my instinct is to separate sport from diplomacy and politics but there comes a point where that may not be possible," Raab said.

"I would say, let's gather the evidence, let's work with international partners, let's consider it further in the round with further action we need to take."

Raab was responding to a question asked by Tory MP Alicia Kearns.

"Given the appalling genocide being perpetrated by the Chinese Communist Party against the Uighur people, I very much welcome that the Foreign Secretary did not rule out a boycott of the Beijing Olympics in 2022," Kearns told The Sydney Morning Herald and The Age.

"Any boycott would send a strong message that we will not give a platform to a country committing appalling human rights atrocities so at odds with the Olympic values of respect and friendship."

Samuel Armstrong from The Henry Jackson Society, a think-tank that successfully campaigned for the British to block China's Huawei from supplying its 5G network, anticipated Britain's allies would increasingly signal that they too were willing to boycott the Beijing games.

"A decade ago we were repeatedly told that Beijing's human rights record would improve after it hosted the Olympic Games in 2008," Armstrong said.

"Instead, China used the Games to woo and distract the world from its ever-increasing surveillance state.

"As Australia's experience has shown, standing up to Beijing, rather than kowtowing, is the only behaviour China understands."

Raab's comments came as 39 nations, including Australia, the United Kingdom and the United States rebuked China at the United Nations over the "political re-education camps" in Xinjiang and its crackdown in Hong Kong.

Germany's Ambassador to the UN Christoph Heusgen delivered the statement on behalf of the countries and said the 39 nations were "gravely concerned" by China's human rights abuses, which includes reports of forced mass sterilisations of Uighur women. 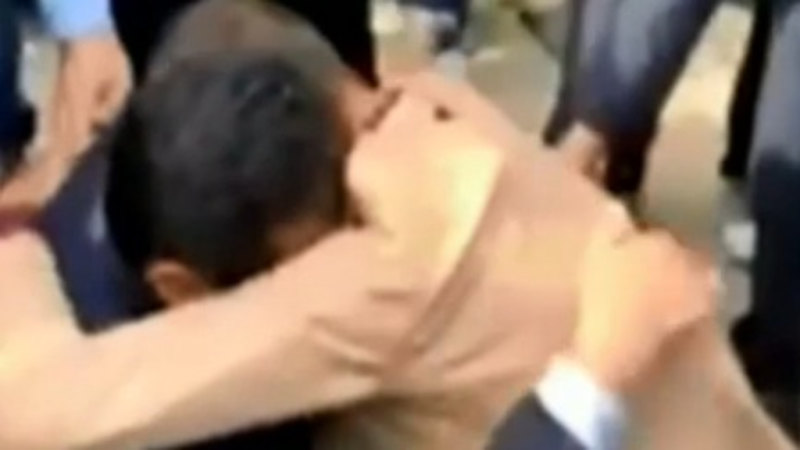 RAW VISION: Beijing has been named to host the 2022 winter Olympics.

"On Xinjiang, we are gravely concerned about the existence of a large network of 'political re-education' camps where credible reports indicate that over a million people have been arbitrarily detained," Heugsen told the UN.

On Hong Kong, Heusgen said the 39 countries shared concerns that Beijing's new national security law for the region does "not conform to China's international legal obligations."

The 39 countries called for China to allow "immediate, meaningful and unfettered" access to Xinjiang for independent observers and stop detaining Uighurs and other minorities.

Please Explain podcast: Is China at a geopolitical turning point?

China's Embassy in the UK issued a short statement on Twitter - a social media platform which is banned by Beijing's censors in China.

"Issues related to Xinjiang, Tibet and Hong Kong are China's internal affairs and have nothing to do with human rights," the statement said.

"Some Western countries should discard their ideological prejudice and stop abusing the UN platform and provoking confrontation."

The centre said that in Spain, Germany, Canada, the Netherlands, the United States, the United Kingdom, South Korea, Sweden and Australia, negative views had reached their highest level in the 12 or more years that Pew Research Centre has been polling in these countries.

This was up 24 per cent from 2019. "This is also the largest year-on-year change in Australia since the question was first asked in 2008," the organisation found.

"This also marks the first year in which a majority of younger Australians have an unfavorable view of China," the centre said.