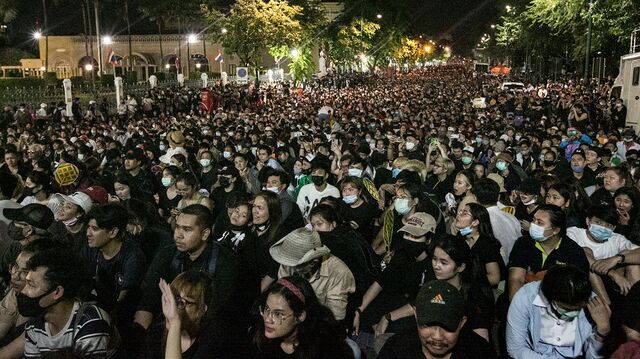 Thailand Cracks Down on Protests

Anti-government protesters plan to defy a ban on gatherings in Thailand’s capital for a third day and hold rallies across the nation, escalating a three-month old movement in support of monarchy reform and greater democracy.

Pro-democracy protesters will return to stage a demonstration in Bangkok later today after tens of thousands of them defied an emergency declared by Prime Minister Prayuth Chan-Ocha on Thursday to quell the escalating demonstrations. Parit Chiwarak, arrested during the demonstration near the premier’s office on Wednesday, urged his supporters to “keep staging protests” until their demands are met.

Protesters shouting “Prayuth get out” occupied the Ratchaprasong intersection in the middle of Bangkok’s main shopping district for several hours on Thursday, demanding the release of leaders arrested by the police in a morning raid. The crowds swelled throughout the evening before dispersing around 10 p.m.

The large crowd indicate the protests are unlikely to abate despite the arrest of key leaders and the government’s move to ban gatherings of five or more people. The mounting demonstrations have weighed on the nation’s currency and stocks, with foreign investors turning net sellers of $10.6 billion so far this year. While the baht is headed for the first weekly loss in three, the benchmark SET Index of stocks has slid 2.5% this week.

“We think the baht will likely underperform its regional peers in the near term, given the ongoing protests” said Irene Cheung, a foreign exchange strategist at Australia & New Zealand Banking Group in Singapore.

The protests, led at first mostly by students, have broken taboos about publicly criticizing the royal family, which sits at the apex of power in Thailand. Demonstrators have questioned taxpayer funds that go toward royal affairs as well as laws that stifle discussion of the monarchy.

The demonstration Thursday night came a day after tens of thousands protesters broke through police lines in a march to Government House, Prayuth’s office, in an escalation of the movement that began in early July. Some protesters gave a three-finger salute -- a symbol of the demonstrations -- to a motorcade of Queen Suthida Bajrasudhabimalalakshana, who smiled and waved at them.

Those arrested included Arnon Nampa and Parit, according to the Thai Lawyers for Human Rights. Parit had written a statement calling for reform of the monarchy with 10 demands, including prohibiting the king from endorsing any coups and revoking laws that criminalize insults against King Maha Vajiralongkorn and top members of the royal family.

After his arrest, Parit asked his supporters to organize protests at “several locations around Bangkok and in every province” of the country. In a letter from his jail, he told activists “don’t stay overnight so the group can be more flexible” to stage demonstrations everyday.

The location of the protests on Thursday night, in front of the Central World shopping mall, was the site of demonstrations in 2010 that ended with a clearance operation in which scores of people were killed. There were also protests in Hat Yai, Songkhla in Southern Thailand and Chiang Mai, according to local media.

The protesters are also calling for the resignation of Prayuth, a former army chief who staged a coup in 2014. They are pushing to rewrite the constitution drafted by a military-appointed panel that helped him stay on following elections last year. The government has said it’s open to changes in some areas, but a process to rewrite the constitution has been delayed in parliament.

On Friday, Prayuth said he won’t resign, adding the emergency rules for Bangkok will be in place for 30 days, or less if the situation improves. His government also issued a statement to “reassure” people of their freedom of expression, saying it “is open to all suggestions for political reform that are proposed by any factions of the political spectrum.”

“Given the sensitivity and volatility of the current situation, the government has deemed it necessary to implement preventative measures to reduce the possibility of violence” it said, asking “all sides to exercise restraints.”

The protests had gained momentum amid the worst economic crisis facing the tourism- and trade-reliant nation, which has passed a $60 billion stimulus to battle the pandemic-triggered slump. The emergency may also hurt the government’s plan to gradually reopen tourism to foreign visitors from this month.

“The state of emergency will likely fuel the movement that’s already gaining momentum,” said Punchada Sirivunnabood, an associate professor of politics at Mahidol University near Bangkok. “The protesters will likely continue their movement because they’re upset that the government isn’t listening to their demand.”