Elected officials and human rights groups in renewed plea for end to federal executions after Bernard, 40, put to death in Indiana 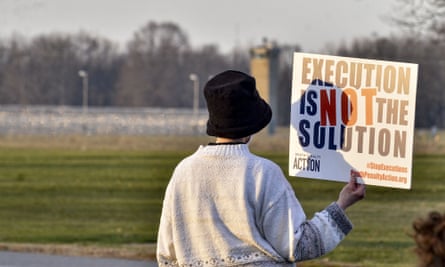 A wave of outrage from human rights group, activists, elected officials, and others over the execution Thursday night of federal prisoner Brandon Bernard continued to grow on Friday behind a coordinated call for the abolition of the death penalty.

Bernard, 40, was executed by lethal injection at a federal prison in Terre Haute, Indiana, after the US supreme court rejected a last-minute appeal to stay the execution and Donald Trump did not publicly respond to calls for him to intervene.

After 17 years without a federal execution, the Trump administration has executed nine inmates since July, and plans five more executions before Joe Biden takes office on 20 January. Biden has pledged to eliminate the death penalty.

Massachusetts Representative Ayanna Pressley, the sponsor of legislation in the House to end the federal death penalty, tweeted footage on Thursday night of Bernard speaking from prison. “Abolish the death penalty,” she wrote.

That call was taken up by activists from Pressley’s progressive allies in Congress to Vanita Gupta, president of the leadership conference on civil and human rights.

“Brandon Bernard should be alive today,” Vermont senator Bernie Sanders tweeted on Friday morning. “We must end all federal executions and abolish the death penalty. In a world of incredible violence, the state should not be involved in premeditated murder.”

Sister Helen Prejean, an anti-death penalty advocate, said she had spoken with Bernard the day before he died. He “told us about everything he was grateful for in his life,” she said. “He died with dignity and love, in spite of the cruel, unjust system that condemned him to die as a result of egregious prosecutorial misconduct.”

Prejean called the killing a “a stain on us all”.

Bernard was sentenced for a role in the 1999 killings in Texas of an Iowa couple whose bodies he burned in the trunk of their car after they were shot by an accomplice, Christopher Vialva.

He directed his last words to the family of Todd and Stacie Bagley, the couple he and Vialva were convicted of killing: “I’m sorry,” he said. “That’s the only words that I can say that completely capture how I feel now and how I felt that day.”

He was pronounced dead at 9.27pm eastern time.

“Brandon Bernard was 19 when he committed murder,” tweeted Julián Castro, the former housing secretary from Texas. “Since then, five jurors and a former prosecutor have said they don’t support the death penalty in his case. Brandon will be the ninth person executed by the federal government this year. We must end this horrible practice.”

Advocates for Bernard included the reality show star Kim Kardashian West and others thought to have Trump’s ear, including two lawyers who defended Trump at his impeachment trial this year in the US Senate and who filed briefs in the supreme court appeal, Alan Dershowitz and Kenneth Starr.

Todd Bagley’s mother, Georgia, spoke to reporters within 30 minutes of the execution, saying she wanted to thank Trump, the attorney general, William Barr and others at the justice department for bringing the family some closure. She became emotional when she spoke about the apologies from Bernard before he died and from Vialva, who was executed in September.

“The apology and remorse … helped very much heal my heart,” she said, beginning to cry and then recomposing herself. “I can very much say: I forgive them.”

In a statement when executions were resumed in July, Barr said the government “owed” it to victims to kill the convicts.

“The justice department upholds the rule of law – and we owe it to the victims and their families to carry forward the sentence imposed by our justice system,” Barr said.

Alfred Bourgeois, a 56-year-old Louisiana truck driver, is set to die Friday for killing his two-year-old daughter. Bourgeois’ lawyers alleged he was intellectually disabled and therefore ineligible for the death penalty. Several courts said evidence did not support that claim.

The first series of federal executions over the summer were of white men, which critics said seemed calculated to make them less controversial amid summer protests over racial discrimination.

Four of the five inmates set to die before Biden’s inauguration are Black men. The fifth is a white woman who would be the first female inmate executed by the federal government in nearly six decades.