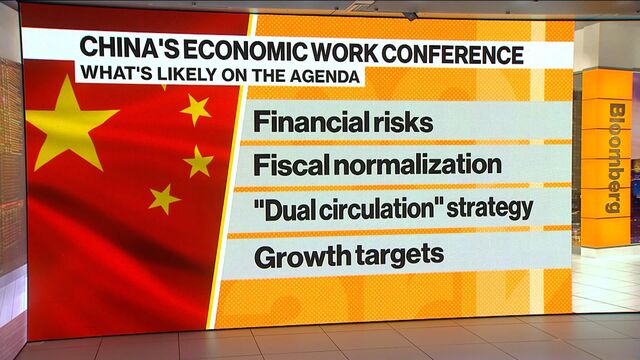 Watch: Chinese leaders are likely to convene this week to lay out their economic priorities for 2021, with a renewed focus on reigning in debt and shielding the economy from geopolitical tensions.

China’s leaders are likely to convene this week to lay out their economic priorities for 2021, with analysts expecting a renewed focus on slowing the pace of debt growth and insulating the economy from tensions with the U.S.

The annual Central Economic Work Conference follows a year in which China loosened fiscal and monetary policy in response to the coronavirus pandemic, giving the economy a boost once it exited lockdown and helping support a gradual global recovery.

With Beijing satisfied that its control of the pandemic has ensured economic expansion this year, the meeting will provide clues on how rapidly the leadership will tighten policy against the backdrop of a sharp acceleration in debt and a string of company defaults. Financial markets have already been spooked by the policy shift, and any signal of an early move could weigh on market sentiment further.

Economic expansion to rebound next year before returning to trend

The work conference has added significance this year, as 2021 marks the first year of China’s new five-year plan. The Communist Party doesn’t usually disclose when its officials meet for the three-day conference, with a statement outlining their priorities expected at the conclusion. Key economic targets are usually made public in March.

Here’s a look at what’s likely to be on the conference agenda.

Top of Beijing’s to-do list next year will be cleaning up the financial system after China’s debt ratio surged to a record level this year. China’s central bank recently indicated that it expects that ratio to stabilize at a “reasonable” level as the economy continues to recover.

The conference will likely be dominated by Liu He, China’s Harvard-educated vice premier, who is best known for masterminding a drive four years ago to lower financial risks by decreasing overall debt levels in the economy at the cost of slower short-term growth.

“Liu He now controls China’s economic policy,” said Houze Song, a research fellow at the Paulson Institute, a think-tank focused on U.S.-China relations. “Financial de-risking will probably be back on the agenda”.

Analysts will watch for how officials balance the need to curb risks with the objective of maintaining stability in order to prevent a panic-inducing wave of defaults. China’s central bank has pledged a smooth transition that takes account of the economy’s recovery and avoids a “policy cliff,” and any change to that language will be closely examined.

“Given the recent corporate bond stress, I believe financial stability will top the policy agenda,” said Raymond Yeung, chief economist for Greater China at Australia and New Zealand Banking Group in Hong Kong. “The authorities will need to balance against the will to clean up zombie enterprises and over leveraging.”

Beijing has in recent years adopted what it calls a “proactive” fiscal policy stance, allowing for a central government deficit of around 3% of gross domestic product, while tolerating larger debt burdens accumulated by local governments to stimulate growth. Flexibility increased this year due to the pandemic, with an unusually high fiscal deficit target of more than 3.6% of GDP.

China’s Premier Li Keqiang said in a meeting with provincial leaders late last month that stimulus this year worked “better than expected,” setting the stage for a normalization of fiscal policy. Analysts expect the headline deficit to fall back to around 3% next year, though precise targets won’t be announced until a meeting of China’s National People’s Congress in March.

Beijing has indicated that its next five-year plan will be centered around a “dual circulation” policy, according to which economic growth will become increasingly dependent on domestic demand, rather than exports. Domestically, the focus is on moving China’s manufacturing up the value chain, including through foreign investment, to ensure a reliable supply of key technologies, which Beijing sees as threatened by political tensions with Washington.

At a preparatory meeting Friday, the ruling party’s 25-member Politburo said China should “lay emphasis on demand-side reform,” with analysts saying this was the first time the party’s top leadership made mention of this objective.

However, those advocating a more redistributive tax policy, or a rapid increase in social welfare spending in order to boost household spending are likely to be disappointed. Liu is more interested in “supply side” measures such as removing trade-barriers between Chinese regions, according to Song of the Paulson Institute. “Demand-side measures will be slow moving,” he said.

Liu gave an insight to his priorities in an article published last month, in which he stated that “contradictions in the economy are still on the supply side,” stressing the need to improve the quality of China’s manufacturing sector, increase competition between companies and “resolve many kinds of bottlenecks” to ease the domestic circulation of goods and services.

In their discussion last week of the economic work conference, the Politburo vowed to strengthen anti-monopoly efforts and what it called the “reckless expansion of big capital.”

China has pledged to focus more on quality economic growth over speed and didn’t publish an official growth target in 2020 for the first time in decades. Chinese President Xi Jinping has outlined an aim to double the size of GDP by 2035, which would imply an annual average growth rate of 4.7%-5% over that period. Economists in a Bloomberg survey predict the economy will rebound sharply in 2021, expanding 8.2%.

If the focus returns to curbing risk, Beijing may be inclined to publish a relatively low growth target next year, if at all.

“China’s growth target next year, if there is one, is the most important for a decade,” said Shaun Roache, Asia Pacific chief economist at S&P Global Ratings in Singapore. “China cannot control debt, cut carbon emissions, and start on the road to technology independence while still growing at breakneck speed. Something has to give and it will most likely be the growth rate.”