NOTE IN THIS POST BY JOHN AUTHERS HOW CHINA'S DEPENDENCE ON FOREIGN DIRECT INVESTMENT IS GROWING TO FINANCE GROWING DEFICITS JUST AS IT FLOUTS INTERNATIONAL CAPITALIST GOVERNANCE STANDARDS! A 'SUDDEN STOP' IS IN THE WINGS!

The Reality of Rotation

A month away from the end of the accursed year of 2020, the much-expected rotation away from the defensive crouch in which investors spent much of the last 11 months is at last under way.​ There are many ways to illustrate this, but perhaps this is the most important:

Long-term U.S. inflation breakevens have risen to their highest in 12 months. This is true both of the projected average for the next 10 years, which is now​ above 1.8%, and of anticipated average inflation for the five years starting five years from now, which is now above 1.9%.

This is scarcely positioning for a return to 1970s-style inflation, but it does show a belief in a return to global reflation. When the global economy is generally healthy, we can expect the dollar to weaken, and that is also exactly what we have. The Bloomberg dollar index, which includes both emerging and developed markets, is at a 30-month low. If it dips much further, it will take out the low set in 2018. The next level to be tested would be the trough of 2014, before the currency began a sharp appreciation as the oil price plummeted:

This is generally good news for much of the world. A cheaper dollar makes life much easier for emerging markets that have borrowed in dollars, and eases the existence of big U.S. multinationals. It is also a symptom of reduced​ fear across the globe. The basic argument for a weaker dollar is put neatly by David Kelly of JPMorgan Asset Management:

Exchange rates are generally more governed by the whims of the market than fundamental economic and policy trends.​ Still there are a number of reasons to believe the dollar will continue to fall, including a persistent trade deficit, the likelihood of very easy U.S. monetary policy, the potential for stronger growth in the global economy than in the U.S. and the prospect of more predictable trade policies under a new Biden administration...​​ ​ ​ ​ ​Historically, a nation’s trade balance has been regarded as a principle determinant of the direction of its currency.​ As America imports more than it exports, it floods the world with dollars to be exchanged into foreign currency to buy those imports.​ That excess supply of dollars should push its value down relative to foreign currencies.​ This would seem to​ be a solid argument for a lower dollar today... This trade deficit could continue to grow into 2021 putting steady downward pressure on the dollar, in​ theory.​

In practice, dollar strength has continued despite a poor trade balance of late. Also, other players in the zero-sum game of currencies might try to strengthen the dollar again. Most importantly, note that the euro moved above 1.20 to the dollar on Tuesday, for the first time since 2018. The European Central Bank found it necessary to talk down the euro earlier this year. As the euro zone consists of countries on the Mediterranean which benefit greatly from tourism, surrounding the export powerhouse that is Germany, a​ strong currency isn’t necessarily great news. One of the year’s last interesting decisions will come when the ECB decides whether it is going to do something to weaken the euro again. Meanwhile, although the euro is at the top of its recent trading range, its inflation-adjusted value​ compared to a range of currencies​ remains well below its level for much of the first decade of this century: 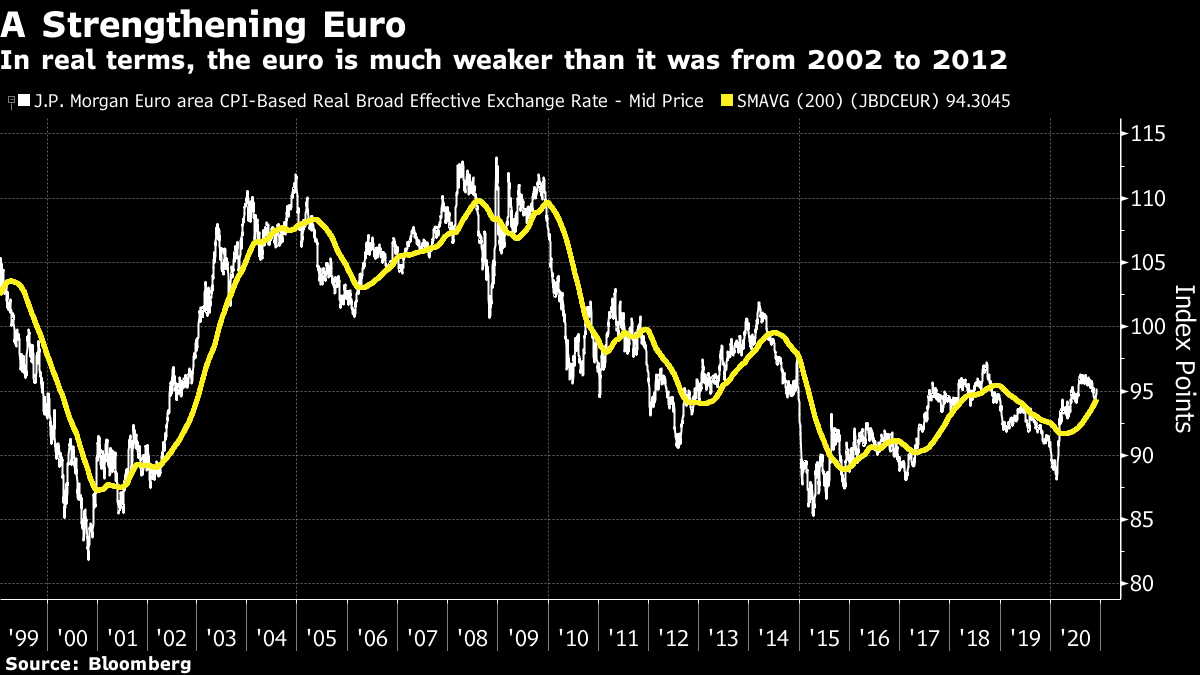 It is difficult​ to see exactly what the ECB can do. A major problem with the effort to produce a Covid vaccine could well bring risk aversion back, and with it funds flowing to the dollar, but that isn’t​ within the ECB’s power. The other obvious path is to cut rates, which would make U.S. yields look more attractive again. But one of the interesting things about the latest dose of euro strength is that it has come even as yield differentials rose in the dollar’s favor. Treasury yields rose sharply Tuesday, and didn’t stop the dollar from falling. The sharp fall in differentials earlier this year plainly helped to weaken the dollar —​ but it isn’t clear that another dose of lower European bond yields would help: 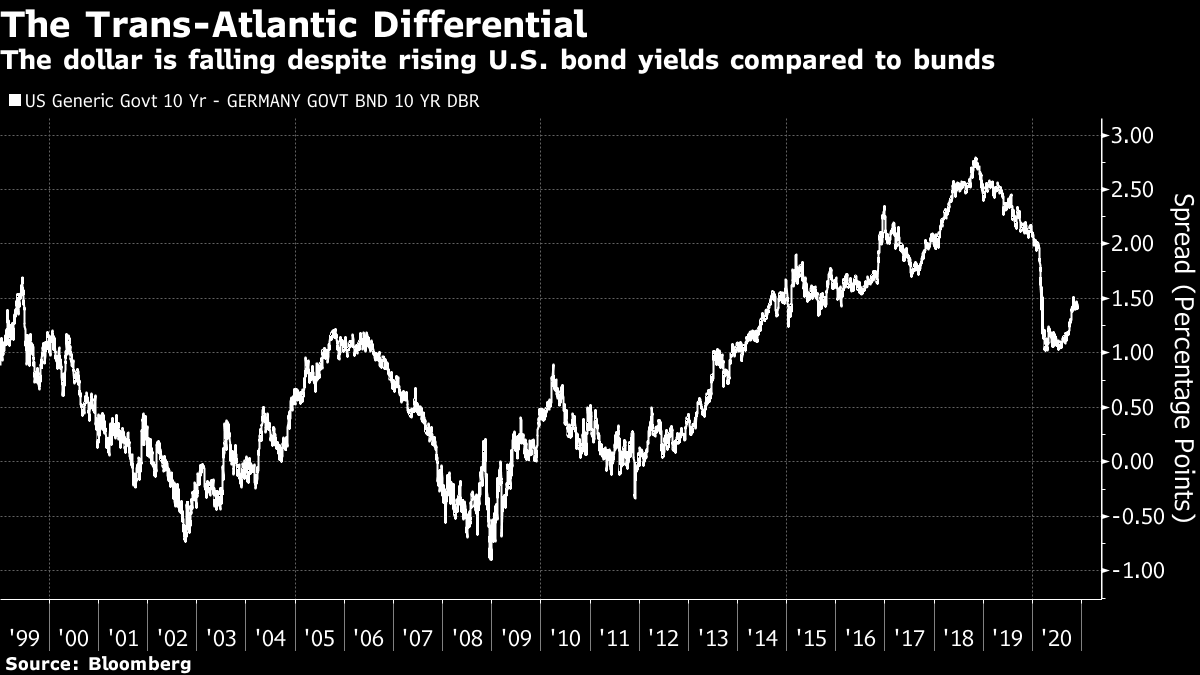 There’s not much the ECB can do, according to Deutsche Bank AG currency strategist George Saravelos, who points out that verbal intervention only worked earlier this year because positioning was already stretched. Now, he thinks, the macro fundamentals are in place for the euro to strengthen beyond $1.20:

In contrast to the summer, the move is not just about the euro. This is a broad-based dollar weakening move driven by global reflation repricing. It is very notable that the dollar is falling even as US yields are moving higher today... so long as front-end real yields in the US remain low, a back-end steepening of the US curve is dollar negative.

Bottom line, unless the ECB decides in favour of an aggressive deposit rate cut later this month, we don’t believe there is much that can be done about the appreciation of the euro.​

How did the dollar stay so strong for so long, despite​ disappointing U.S. growth in the decade after the crisis? Over that decade, Europe ran into the euro-zone sovereign debt crisis and then Brexit, while the emerging world suffered from a persistent bear market in commodity prices. Those no longer apply. This leaves emerging markets as the most obvious beneficiary. In one dramatic demonstration of that, note that Mexico’s stock market has now caught up with the S&P 500 since the March low. Both have shown a remarkable gain of some 60%: 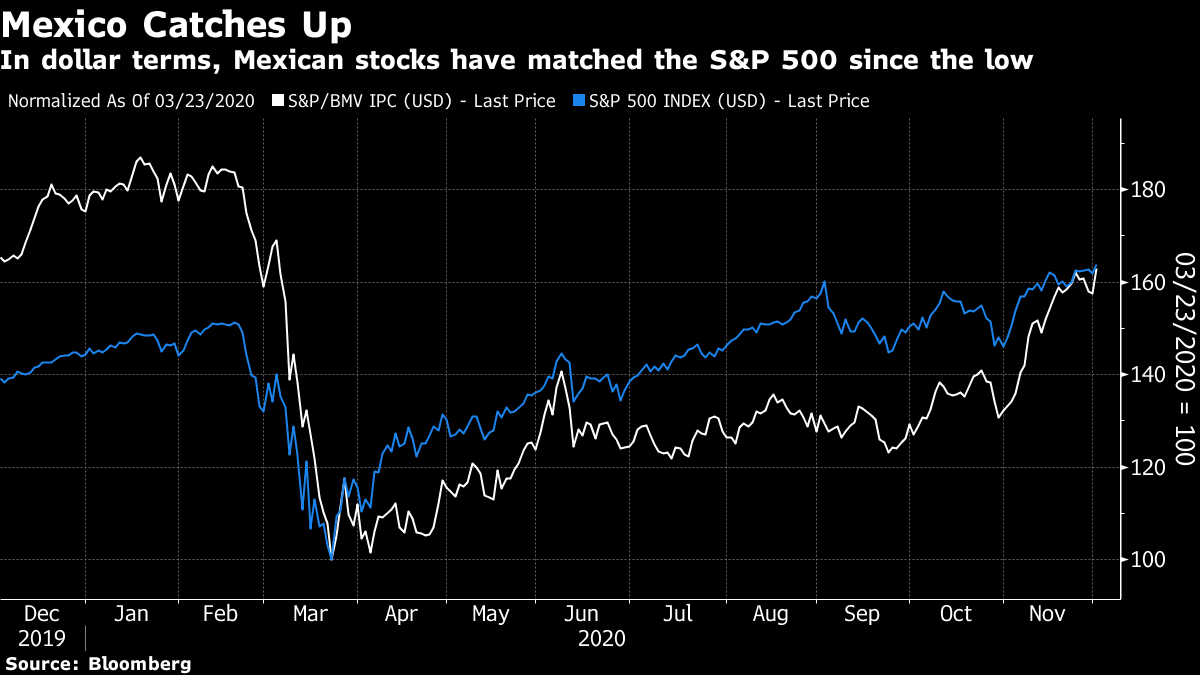 That leads to one of the most tangible signs of the rotation afoot:

Money is heading back into emerging markets, and it is no longer going only to China. A new report from the Institute of International Finance makes clear that the rest of the emerging complex is now pulling in most international flows, which are going to both equity and debt: 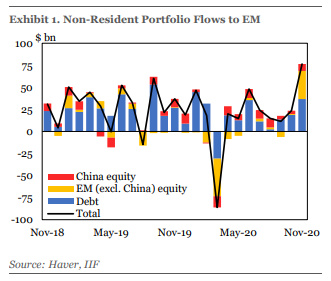 This is important as emerging markets have shown themselves to be acutely vulnerable to sudden outflows of capital over the last few decades. The outflow that came with the onset of the pandemic earlier this year was, remarkably, greater than those seen after the Lehman bankruptcy of 2008, or the 2013 Taper Tantrum, or the 2015 Chinese devaluation. That makes it all the more impressive that the emerging world is already pulling in money again: 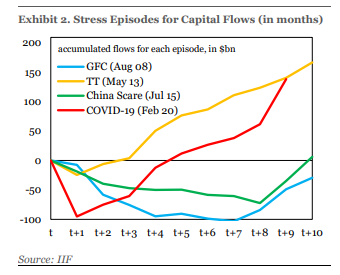 Meanwhile, emerging-market central banks’ supplies of foreign exchange reserves are no longer under pressure, and they are able to rebuild. China had to spend about $1 trillion of reserves to deal with its last devaluation crisis, and other emerging markets suffered a big run earlier this year. The IIF’s figures suggest that the incident is already over.​ 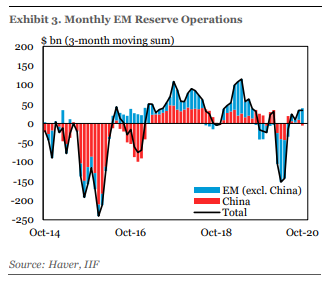 This is a big deal, as emerging market flows can often be self-fulfilling prophesies. According to the IIF, the current quarter is likely to be the strongest for inflows since the first three months of 2013, immediately before the Taper Tantrum. If we exclude China, then flows from foreigners into the emerging market complex are at their strongest since the second quarter of 2014, immediately before the slump in oil​ and other commodity prices that pulled down the terms of trade for much of the emerging world, and caused their currencies to fall.

One of the many reasonable fears sparked by the Covid shock was that it would bring a vintage emerging market crisis in its wake, with contagion, defaults​ and devaluations. With that fate now avoided, evidently many spot value. For equities, if we use the Shiller cyclically adjusted price-earnings ratio, which I featured yesterday, we find that the MSCI emerging markets index currently trades at a multiple of 13.7. Its median over history is 14.9, according to the​ asset allocation site kept by Research Affiliates LLC, so emerging markets do look cheap. Meanwhile, the U.S. trades at a CAPE of 31.6, on Research Affiliates’ calculation, far above its historic median of 16.3. It is popular to be bullish about emerging markets at present; with a rotation into the sector already under way, and assets looking cheap, it is easy to see why.