SUPERB POST BY AUTHERS! READ CAREFULLY...AND GET OUT OF STOCKS!

The two deadliest words in economics are in Latin: ceteris paribus, or all else equal. In natural sciences like physics and chemistry, researchers can construct experiments to ensure that all else is equal. Economists can’t do that. So when building models, they generally include the crucial words ceteris paribus. This is an assumption, which may well not cohere in the real world.​

Bear these words in mind when examining the current debate over the valuation of​ U.S. equities. They look extremely expensive by almost any measure that compares them with their own sales, dividends, earnings or cash flow. But the yields on U.S. Treasury bonds hit an all-time low earlier this year and remain at levels that historically would have been regarded as unimaginably low. To some extent, all else equal, lower interest rates should justify paying more for stocks; they mean that bonds, the prime alternative to equities, are more expensive, and they also mean that the future earnings stream from equities can be discounted at a lower rate, making them more valuable.​

The questions, then, are​ to what extent, exactly, do lower bond yields justify higher equity valuations? And critically: Are all other things equal?

The debate gets fresh urgency because the cyclically adjusted price-earnings, or CAPE, ratio, as promulgated by Robert Shiller of Yale University (and covered in Points of Return​ earlier this week), is currently higher even than it was on the eve of the Great Crash of 1929. The CAPE compares share prices to average inflation-adjusted earnings over the previous 10 years to even out the effect of the economic cycle, and has been famous ever since Shiller used it to predict the bursting of the dot-com bubble 20 years ago.​

This week, Shiller went into print with Laurence Black and Farouk Jivraj with his suggested tool for handling the gap between the CAPE and interest rates. What he calls the “Excess Cape Yield,” or ECY, is a very simple spread. It expresses CAPE as an earnings yield, rather than a multiple, and then subtracts the 10-year interest rates. As he shows on his website, this measure has usually done a great job of predicting subsequent returns over the following 10 years. And on the face of it, this measure suggests that the U.S. market should be in line for average real annual returns of about 5% per year for the next decade. That would not hurt at all: 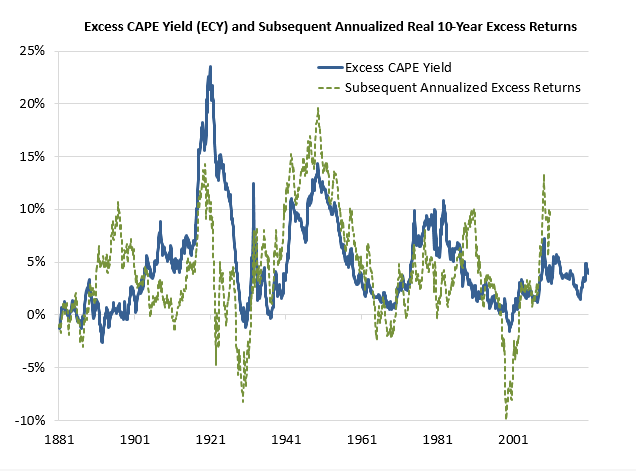 That said, this still isn’t an argument to buy the U.S. rather than somewhere else. Repeating the exercise for other countries, Shiller and his colleagues found that the ECY looks compellingly cheap in many other places:

The ECY is close to its highs across all regions and is at all-time highs for both the UK and Japan. The ECY for the UK is almost 10%, and around 6% for Europe and Japan. Our data for China do not go back as far, though China’s ECY is somewhat elevated, at about 5%. This indicates that, worldwide, equities are highly attractive relative to bonds right now.

After Britain has spent half a decade shooting itself in the foot with the Brexit saga, it makes sense that it might now be compellingly cheap. Beyond that, the ECY has the great virtue of conforming with common sense. It seemed like the collapse in interest rates amid historic levels of help from central banks bailed out the stock market, and that is what the ECY says:

a key takeaway of the ECY indicator is that it confirms the relative attractiveness of equities, particularly given a potentially protracted period of low interest rates. It may justify the FOMO narrative and go some way toward explaining the strong investor preference for equities since March.

Eventually, down the line, bond yields may just rise, and equity valuations may also have to reset alongside yields. But, at this point, despite the risks and the high CAPE ratios, stock-market valuations may not be as absurd as some people think.

Shiller made his name with the public by denouncing the dot-com bubble, and later the housing bubble; he isn’t prepared to call this a bubble. Another phrase for what is now going on, which was popular a decade ago, was of a “rational bubble.” With rates so low, the argument goes, it was rational to pay silly money for stocks because there was a lack of alternatives.​

But this leads to a question which Gerard Minack, of Minack Advisors, raises this week. Do low interest rates in their own right lead to higher earnings multiples? His answer is no; it’s not rational to bid up stocks just because rates are low. The reason is because not all else is equal. Usually interest rates are low because growth is bad, and when growth is bad that tends to be bad for equities. That leads to a curved relationship between rates and equities over time —​ when rates come down from very high levels, equity multiples tend to improve, but when rates then drop to very low levels, equity multiples fall because this generally means that the economy is mired in a recession.

The following chart maps the CAPE on one scale against the 10-year yield on the other for every month since 1925. An immediate look shows that the relationship between the two isn’t that strong. The best fit Minack can find, excluding the extraordinary dot-com years, has an R-squared of​ only 0.12, meaning only a weak correlation: 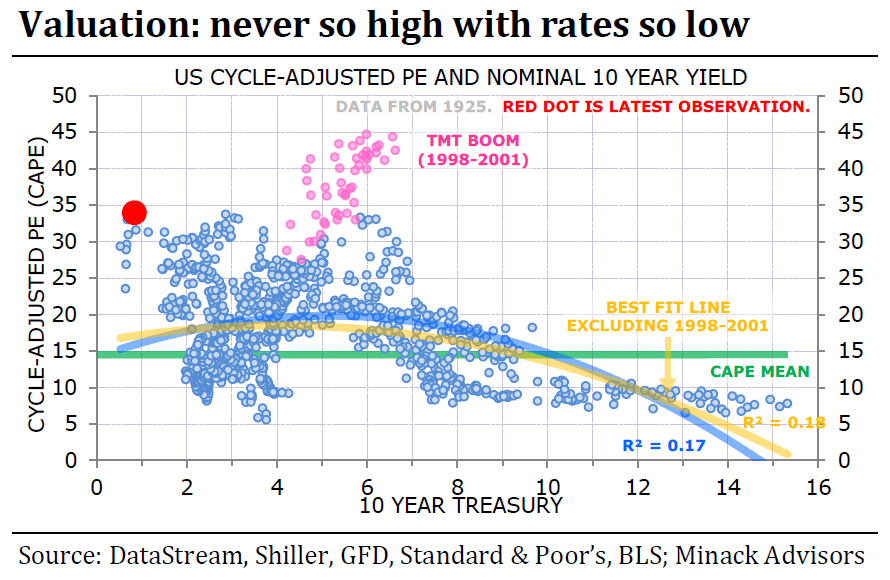 The dot-com bubble readings, shown in pink, are almost literally off the chart —​ exceptionally high multiples given the interest rates of the time. Meanwhile, the current reading, in bright red, is a tad alarming. This isn’t a well-explored end of the spectrum, obviously, but stocks do look expensive. In terms of Shiller’s logic, Minack is showing that we would expect the excess yield to rise as rates get to extreme lows. If the relationship with rates held as anticipated in his chart, then the excess yield as calculated by Shiller would be roughly double what it is now (and stocks, on Shiller’s suggested methodology, would look like a screaming buy).

Minack then repeated the exercise for real yields, accounting for inflation. Real yields, compared to current inflation, are low at present, but not historically unprecedented. This exercise gives a slightly better correlation (although only slightly), makes the dot-com bubble look like more of an outlier and, sadly, also makes the current point look like more of an outlier. There have been a number of observations with 10-year nominal yields below the rate of inflation in the past, and this is the most expensive that stocks have ever been during such a period: 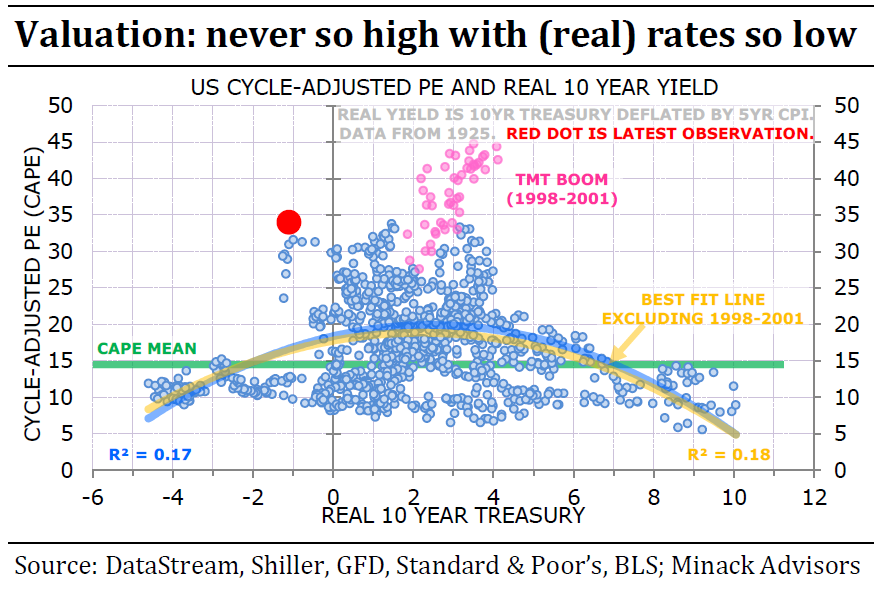 To be clear, Minack isn’t saying that all stock markets show up as an historical outlier, just the U.S. This chart, using nominal yields since 1987, compares CAPEs and 10-year yields for developed markets outside the U.S., emerging markets, and the U.S. Outside the U.S., stocks appear to be reasonably valued given the level of interest rates. U.S. stocks look wildly overpriced: 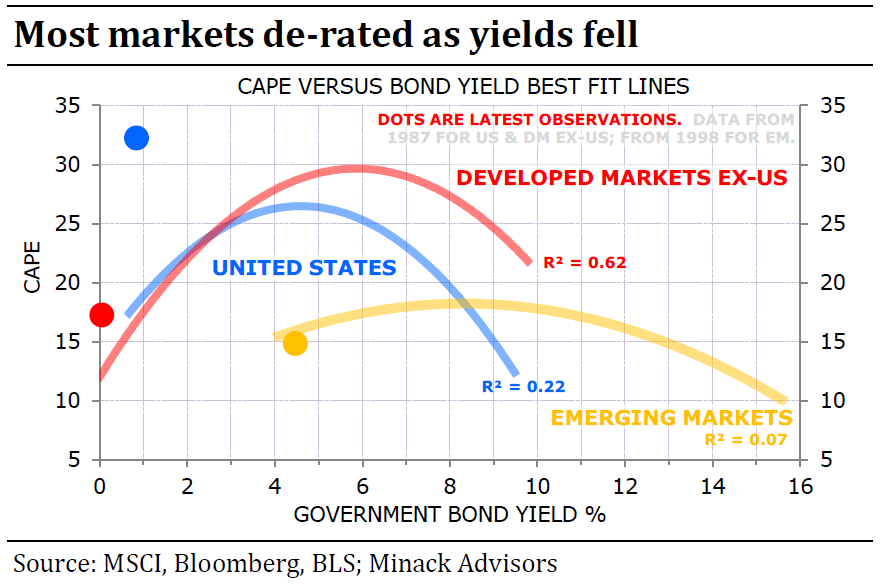 What is intriguing is the way the U.S. relationship between yields and​ earnings multiples has started to differ from its historic pattern in the last six years. Up to the end of 2013, there was a much more discernible correlation, with an R-squared of 0.38. Since the end of 2013, however, earnings multiples have been without exception higher than the previous relationship with interest rates would have suggested. They have never been further away. To be clear, this means that they now look unambiguously expensive, given where interest rates are, even though interest rates are so low: From this we can learn two things. One is that the relationship between rates and earnings multiples seems to have changed at some point early in the last decade in the U.S., presumably when investors got used to the notion of enduring “lower for longer” rates coupled with low inflation. I would argue that this was because they believed the traditional relationship between rates and the economy had broken down. The second is that whatever is driving multiples higher, it isn’t rates. As the chart shows clearly enough, rates have been on or about where they are now for nine months. Earnings have dipped and then recovered, and this is the most expensive that stocks have been.

To find out what is driving multiples, Minack turns to the FANG stocks, which he defines as the FAAANMs (for Facebook Inc., Amazon.com Inc., Apple Inc., Alphabet Inc., Netflix Inc. and Microsoft Corp.). The key point is that their earnings, until now, have defied slow growth that bedeviled the developed world during the post-crisis decade, and have even defied the​ slump that followed the Covid shock. The rest of the S&P 500, and indeed the rest of the world, did nothing remotely similar. The following chart from Minack shows the internet platform groups’ earnings, rather than their share prices.​ 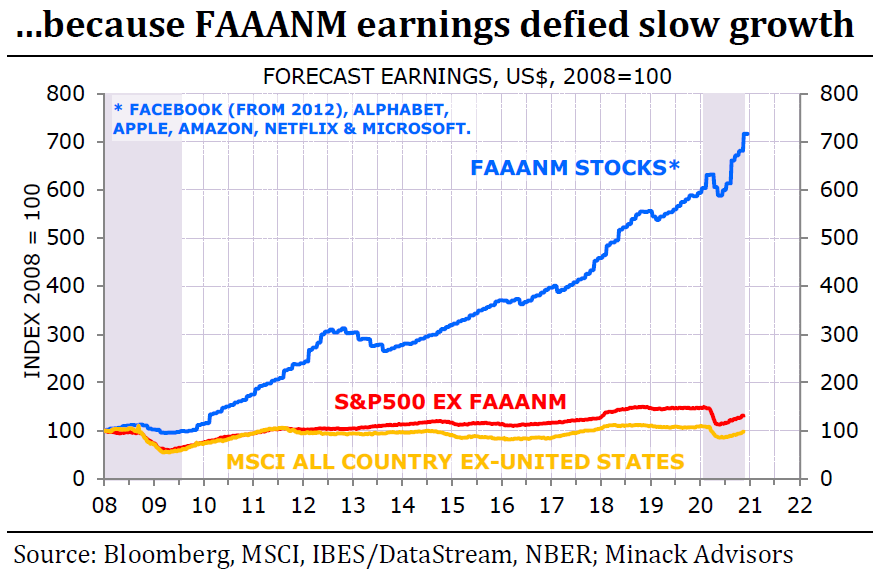 The phenomenon continues. The NYSE Fang+ index hit a new all-time high Thursday. Over the last five years, its performance has dwarfed that of the S&P 500, and the MSCI all-world index. While smaller stocks are beginning to make a relative comeback, the FANGs’ share prices are as high as they have ever been in absolute terms.​ 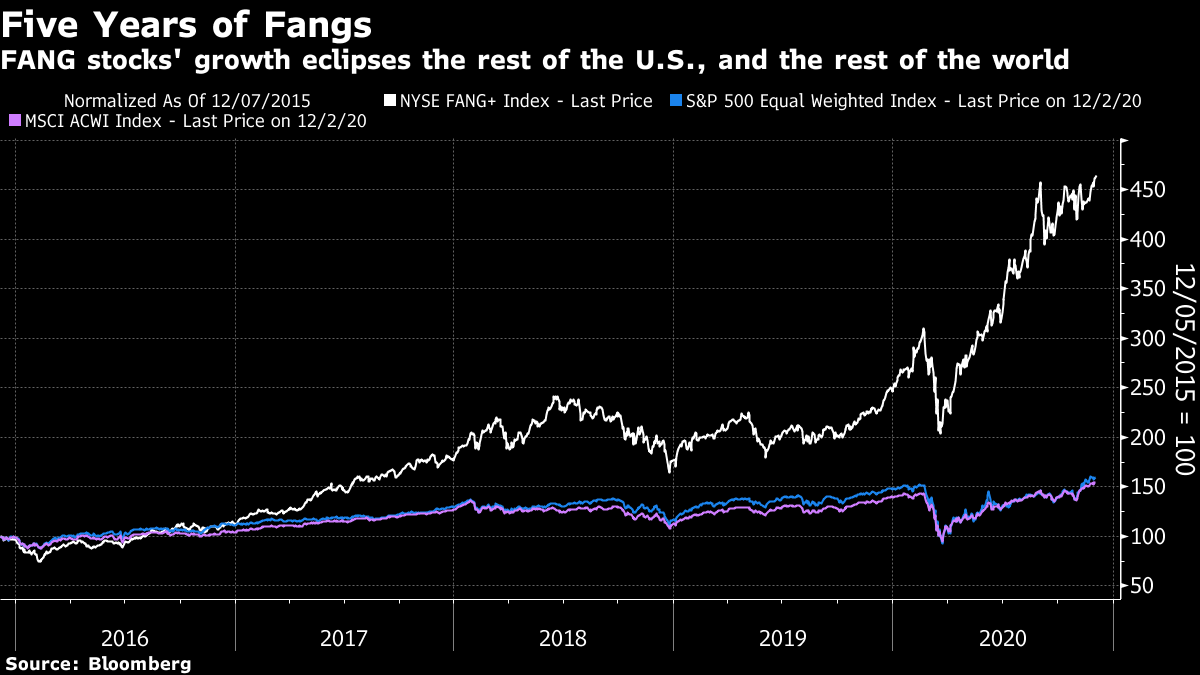 So, much of the planet has seen corporate earnings behave much as we would expect in a world of very low interest rates (which is to say, in a very sluggish economy). But a small group of U.S. companies have managed to defy that logic completely. And now earnings estimates are rising as expectations of a post-vaccine boom take hold. That, logically enough, leads stocks to trade at a higher multiple of past earnings. It is earnings expectations, not rates, that have brought the market up in the last month or so, on this logic, and it would be an earnings disappointment (presumably sparked by some disappointment with distribution of the vaccine) that would bring it down again.

In short, the US has been exceptional – relative to​ both its own history and other markets – by re-rating​ in the low-rate post-GFC cycle. The reason​ global equities are re-rating now is because of​ improving growth expectations, not because rates​ are low. If the rally were to correct – and I think it’s​ getting frothy – then the catalyst will be a growth​ scare, not a rate scare. Having said that, it’s a​ terrific combination for equities if growth does​ improve as expected next year and rates stay low.​ That combination would be more beneficial for de-rated​ non-US markets than the re-rated US market.

All of this makes sense. Wherever you turn, the argument for favoring non-U.S. equities over the U.S. remains robust. And Minack is right that a lot is riding on bullish earnings forecasts.

But we still might prefer not to find out what happens if rates do surprise by rising. U.S. markets have been working on the assumption that they will stay low for a while. It has been an unspoken ceteris paribus clause. The sharp corrections in response to slightly higher rates in 2013 and 2018 both forced central banks into climbdowns. We don’t yet know the results of an experiment in which rates rise and central banks cannot climb down because the economy is growing and inflation is back.