WHY IS THERE NO MENTION IN THIS NYT ARTICLE OF ZOOM'S CEO? ERIC YUAN MUST BE TRIED FOR TREASON AND BE EXECUTED ! HE IS A CHINESE RAT TRAITOR AND ALL TRAITORS MUST DIE!

U.S. prosecutors have charged a company executive based in China with conspiring to terminate online meetings about the Tiananmen Square massacre.

In a novel case, federal prosecutors on Friday brought criminal charges against an executive at Zoom, the videoconferencing company, accusing him of engaging in a conspiracy to disrupt and censor video meetings commemorating one of the most politically sensitive events in China.

Prosecutors said the executive, Xinjiang Jin, who is based in China, fabricated reasons to suspend accounts of people in New York who were hosting memorials on the anniversary of the Tiananmen Square massacre and coordinated with Chinese officials to identify potentially problematic meetings.

He is accused of working with others to log into the video meetings under aliases using profile pictures that related to terrorism or child pornography. Afterward, Mr. Jin would report the meetings for violating terms of service, prosecutors said.

At least four meetings commemorating the massacre this year — largely attended by U.S.-based users — were terminated as a result of Mr. Jin’s actions, according to prosecutors.

Mr. Jin, who is also known as Julien Jin, acted as the liaison between Zoom and Chinese government authorities, prosecutors said. He is identified in the criminal complaint only as an employee of a U.S. telecommunications company. Zoom confirmed on Friday that it was the company.

Mr. Jin has not been arrested and is at large in China, which does not have an extradition treaty with the United States. 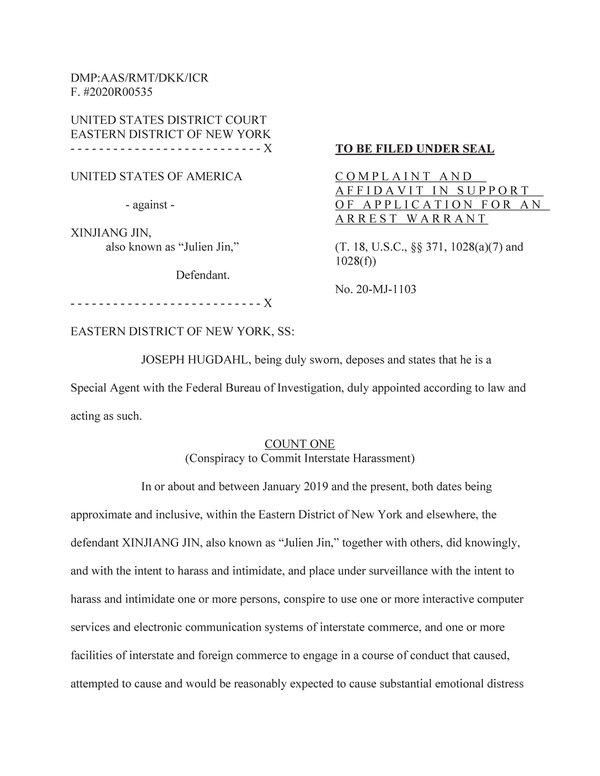 The case represented an unusually sharp warning by law enforcement officials to American technology companies that operate in China, which often find themselves caught between the principles of free speech and the demands of China’s censorship machine.

“Americans should understand that the Chinese government will not hesitate to exploit companies operating in China to further their international agenda, including repression of free speech,” Christopher Wray, director of the F.B.I., said in a statement.

A spokesman for Zoom said on Friday that Mr. Jin violated its policies by attempting to circumvent internal controls. Mr. Jin has been fired, and other Zoom employees have been placed on administrative leave pending the completion of an internal investigation.

On Tech with Shira Ovide: Your guide to how technology is transforming our lives — in the time of coronavirus and beyond.

In a lengthy statement, the company said it has since provided end-to-end encryption for all users and restricted access for China-based employees to Zoom’s global network.

The company has its headquarters in San Jose, Calif., and has hundreds of employees in China.

Charging a China-based employee working for an American company is an aggressive rebuke against China, which requires tech companies that operate there to monitor user activity in order to censor politically sensitive topics.

Seth DuCharme, the acting U.S. attorney in Brooklyn, whose office brought the case, said the allegations exposed the security vulnerabilities of American tech companies that engage in the “Faustian bargain” of operating in China.

The U.S. attorney’s office in Brooklyn has been particularly active in bringing cases that have angered the Chinese government, including a criminal case against Huawei, the Chinese telecommunications giant, and charges against eight people accused of conspiring on behalf of China to harass political dissidents in the United States to return home.

Mr. Jin was charged with conspiracy to commit interstate harassment and illegal conspiracy to transfer means of identification. A lawyer for Mr. Jin could not be identified.

The case is also a black eye for Zoom, raising fresh questions about the company’s security at a time when its software is heavily relied on for work, school, health care and more.

Mr. Jin asked co-workers for user data from American servers, which he did not have direct access to, prosecutors said. It was not clear how much access Chinese government officials have obtained to the account information of Zoom users in the United States.

The spokesman for Zoom said the company’s internal investigation revealed that Mr. Jin shared individual user data with Chinese authorities. He shared the data for “fewer than 10 individual users” who were based outside China, the company said.

The criminal complaint portrayed a relentless effort by Mr. Jin and others to stop video meetings commemorating the anniversary of the massacre, on June 4.

In the weeks before the anniversary, Mr. Jin warned a co-worker in the United States that Chinese officials were tracking Zoom users and emphasized the need to keep secret demands by the Chinese government for censorship, according to the criminal complaint.

“They request that we cannot disclose it,” Mr. Jin wrote. “Otherwise it will greatly impact our country’s reputation.”

Mr. Jin told the colleague that if the Tiananmen Square issue was poorly handled, China could block the company’s servers, according to prosecutors.

In another instance, Chinese government officials notified Mr. Jin of a planned American-based Tiananmen Square memorial and provided him with the meeting number of the video call, which Mr. Jin was then able to terminate, prosecutors said. It was not clear how officials obtained the meeting number, as it had not been publicized, according to prosecutors.

After customer demand for Zoom skyrocketed during the coronavirus pandemic, the Chinese government imposed additional controls over Zoom’s operations, even when they involved users outside of China.

In April, Mr. Jin told another Zoom employee that the Chinese government ordered that Zoom develop the ability to terminate a meeting within one minute of discovering any violation of Chinese laws.

In June, Zoom came under scrutiny by lawmakers after it blocked the accounts of Chinese human-rights leaders who used the platform to organize commemorations of the 31st anniversary of the 1989 Tiananmen Square crackdown, in which army troops killed hundreds of student demonstrators, workers and ordinary citizens. Those accounts were later reinstated.

The Zoom commemorations also led to consequences for people who were scheduled to speak at them.

One dissident in the United States, who was not identified by name, told the F.B.I. that Chinese authorities had pressured several people in China not to speak at a Zoom event that he had organized.

On the morning of the event, the criminal complaint said, Chinese police officers detained one of the potential speakers for several days and arrived at the home of another to prevent the person from logging into any electronics.