The last British governor of Hong Kong has told the EU not to go ahead with an economic deal with China in the wake of the latest crackdown on the opposition in the territory.

The arrest of 53 people on charges of “subversion” led Lord Patten to tell the EU it would forfeit its right to be treated as a serious global economic and political power if it went ahead with the draft investment deal.

The draft has yet to be ratified by the European parliament, and Germany, the lead advocate of the deal, will come under intense pressure to justify the closer economic ties. 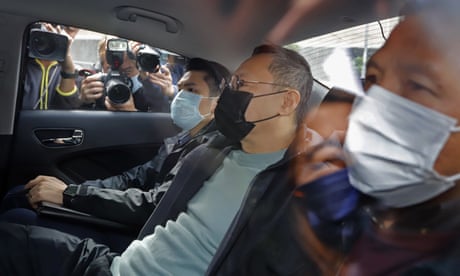 Patten, in remarks designed to resonate in Germany, said: “It is worth remembering, for all European politicians wherever they come from, that the Jewish community around the world has been outspoken about Xinjiang and in particular has drawn attention to the similarities between what is happening in that region today and the Holocaust in the 1940s.”

He added: “If this deal goes ahead it will make a mockery of Europe’s ambitions to be taken seriously as a global political and economic player. It spits in the face of human rights and shows a delusional view of the Chinese Communist party’s trustworthiness on the international stage.

The EU called for the release of the arrested opposition figures on Wednesday and said it was considering further sanctions.

“We are currently analysing the situation to see how we might need to react. There are other possibilities open to us, sanctions for example,” the European commission spokesperson Peter Stano told journalists.

“We call for the immediate release of the arrested people,” Stano said.

Lisa Nandy, the Labour opposition’s foreign affairs spokesperson, called for the British government to make a Commons statement on the arrests.

“Democracy is being dismantled in Hong Kong,” she said. “China is undermining the rights and freedoms guaranteed under the Basic Law [Hong Kong’s mini-constitution] and further disregarding its commitments under the Joint Declaration,” which set out the terms of the return of the territory from the UK to China in 1997.

Her deputy, Stephen Kinnock, urged ministers to end the delay in the use of sanctions against individual Chinese officials behind the suppression.

Norbert Röttgen, a candidate for the German CDU leadership and possible successor to Angela Merkel, said the EU could not ignore China’s methods, including breach of contract and suppression.

Leading members of the European parliament demanded a response from the commission, including a credible explanation of how the commitments made by China in the investment deal can be policed and enforced.

Sabine Weyand, the lead EU commission official behind the deal, had only 24 hours earlier defended it partly on the basis that the EU was being asked to apply to its economic relationships moral standards not required of other blocs or countries.

She said the EU had used its negotiating leverage to obtain “WTO+ commitments on level playing field, market access and on sustainable development that benefit other partners as well, and should act as a springboard for global disciplines”.

Other international politicians condemned the arrests.

Taiwan’s foreign minister, Joseph Wu, tweeted: “The mass arrest in Hong Kong comes as a deep shock to those who treasure freedom.”