Recep Tayyip Erdoğan, Turkey’s “strongman” leader, is pleased as punch. He’s the new, biggest fan of Britain’s international trade secretary, Liz Truss, whose shabby work this is. Erdoğan hailed the deal as the start of a “new era” and a landmark for Turkey. After years of disastrous economic mismanagement and fierce rows with the US and EU over Turkish policy towards Russia, Syria, Libya, Greece and Cyprus, Erdoğan badly needed a win. Hapless Truss delivered.

The fact that Johnson used the spectre of Turkish migrants to frighten Leave voters in 2016 appears forgotten now. His government has created a favourable bilateral trade framework, and promised bespoke “upgrades”, to a leader who frequently mocks the EU and faces possible European trade sanctions. How does that square with Johnson’s vow to be “the best friend and ally the EU could have”? The level playing field is already tipping. 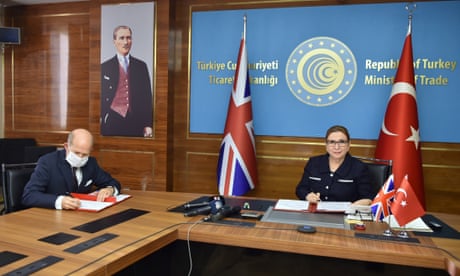 This rushed deal rides roughshod over widely shared human rights concerns. It may be naive to think that the agreement, which replicates existing EU-Turkey arrangements, would allow matters of principle to imperil £18.6bn in two-way trade. Yet Britain is Turkey’s second-largest export market. Ankara was desperate to maintain tariff-free access. This gave Johnson and Truss leverage. It was a sovereign moment. But they failed to demand that Erdoğan change his ways.

Britain is now unquestioningly tucked up in bed with a government that routinely persecutes its critics, manipulates elections, and suborns judges. Independent lawyers, human rights defenders and journalists are jailed or exiled in their hundreds. Selahattin Demirtaş, former leader of the pro-Kurdish Peoples’ Democratic party, languishes in jail despite an order to free him – from the European court of human rights.

Alive to these and similar problems relating to other post-Brexit trade partners, the House of Lords amended the government’s Trade Bill last month to require human rights risk assessments when making agreements – to ensure compliance with the UK’s international treaties and obligations. But the government is expected to scrap the amendment when the bill returns to the Commons. The Turkey deal contains no such safeguards.

In its scramble to replace lapsed EU arrangements, Johnson’s government has so far “rolled over” about 30 existing trade deals. Like the Turkey deal, they have not faced thorough parliamentary scrutiny. The list includes other countries or entities with contentious human rights records, such as Egypt, Tunisia, Israel and the Palestinian Authority. Bilateral deals with notorious rights abusers such as China and Saudi Arabia have not been attempted – yet.

A blanket halt to trade with Turkey or any other country over human rights concerns is not generally a course of action that appeals to British governments. An exception was the former foreign secretary Robin Cook, who championed an “ethical foreign policy”. But trading ties can be used to advance wider objectives, such as respect for democracy and individual freedoms. This element is wholly absent from Johnson’s cash-and-carry approach.

For example, a large chunk of Turkey-UK trade in previous years has comprised military sales to Ankara. According to Campaign Against the Arms Trade, Britain has exported £1.3bn worth of arms to Turkey since the 2013 Gezi Park popular uprising. In the period following a failed coup in 2016, when Erdoğan began a series of brutal crackdowns, arms export licences worth £806m were granted. New licences were halted in 2019 but existing ones remained valid.

This lucrative business, or the prospect of losing it, may help explain the haste in finalising the Turkey deal. Yet the fact that Erdoğan stands accused of using British-made equipment and technology to repress domestic opponents, attack Syria’s Kurds, intervene in Libya’s civil war, and stoke the Azerbaijan-Armenia conflict should have given serious pause. These actions run contrary to British interests, as does Erdoğan’s trouble-making in the eastern Mediterranean. Yet Johnson’s government, ever mindful of its Brexit needs, has kept its head down.

Full and timely parliamentary scrutiny of post-Brexit trade deals would help bring such omissions and contradictions to light – but is sadly lacking, as Emily Thornberry, Labour’s shadow trade secretary, said in November. She accused the government of “sheer bumbling incompetence” after Greg Hands, the trade minister, admitted there was not enough time for MPs to scrutinise trade deals before the 31 December deadline. So much for a sovereign parliament “taking back control” of Britain’s destiny and laws.

The Turkey deal illustrates a bigger, fundamental hypocrisy. Extolling a future “global Britain” in 2019, foreign secretary Dominic Raab promised that “once we’ve left the EU … human rights abusers anywhere in the world will face consequences for their actions”. In January 2020, Raab assured the Commons that “a truly global Britain is about more than just international trade and investment … Global Britain is also about continuing to uphold our values of liberal democracy and our heartfelt commitment to the international rule of law.”

Raab seems to mean well, but ne’er-do-wells such as Erdoğan are laughing fit to burst. Raab’s recent imposition of sanctions on individual rights abusers in Russia, Saudi Arabia and elsewhere does not affect the bigger picture. It is of a British government hellbent on cutting hasty, ill-considered deals with all manner of undesirable customers around the world, without proper regard for the political, legal, strategic and human consequences. And to think Tory aristocrats used to look down on trade.