MA SHOULD HIRE ME AS ADVISOR : I TOLD HIM LONG AGO TO SHUT UP...

Alibaba co-founder has fallen out of favour with Beijing, but observers cautious about drawing conclusions

Speculation is mounting over the whereabouts of the Chinese billionaire Jack Ma, who has not been seen or heard in public for more than two months.

Ma, the co-founder and former chairman of the technology firm Alibaba, has fallen out of favour with China’s leadership. In late October, he stood alongside senior officials and delivered a blunt speech criticising national regulators, reportedly infuriating China’s president, Xi Jinping.

In the following months, regulators summoned Ma and other executives in for questioning and halted what would have been the world’s biggest share offering of his company, Ant Group. They later launched anti-monopoly investigations into Alibaba and its key competitor TenCent, and called Ant Group in for questioning. In late December, regulators ordered Ma to pare down his empire.

Ma has not been heard from during the controversies. His last public appearance appears to have been at a livestreamed event on 31 October, an opening ceremony of the annual Chinese shopping event Double 11. In November, he reportedly did not appear in his role as a judge for the final episode of entrepreneurial game show Africa’s Business Heroes, which Alibaba has since blamed on a scheduling conflict.

Ma was replaced with another Alibaba executive and his photo removed from the website. He also did not appear at this year’s Shanghai Zhejiang chamber of commerce meeting, where he has delivered a speech every year since 2016.

Bloomberg reported Ma had been warned in early December not to leave the country. A hashtag “Ma Yun banned from leaving China” – referring to Ma’s Chinese name – was censored on Weibo, but his name was not publicly listed on a national database of people subject to such bans.

Observers are being cautious in drawing any conclusions, with so little confirmed information. BBC cited an Alibaba employee saying that Ma often takes time off before the Chinese new year, in February.

Martin Chorzempa, a research fellow at the Peterson Institute for International Economics, told Vice he would expect Ma to be laying low. “You don’t want to be in the public eye when your company is in a very complicated political situation.”

Duncan Clark, the chairman of the Beijing-based tech consultancy BDA China, agreed Ma was likely avoiding the public eye. “This is a pretty unique situation, more linked to the sheer scale of Ant and the sensitivities over financial regulation,” he said.

However, the various crackdowns on Ma’s empire have all been interpreted as China’s government reining in a businessman who was overstepping the mark, having become internationally renowned and unafraid to publicly criticise the Chinese Communist party (CCP) government. The CCP has since made it a priority to crack down on monopolistic practices. 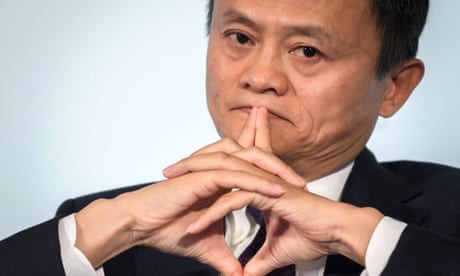 When regulators halted Ant Group’s initial public offering, a People’s Daily editorial began resurfacing that said: “There is no so-called era of Ma Yun, only Ma Yun as part of the era.”

Ma is not the first Chinese tycoon to face a government crackdown.

Bill Bishop, the author of the China-focused newsletter Sinocism, wrote that with Ma, “the party has once again reminded all private entrepreneurs that no matter how rich and successful you are it can pull the rug out from under your feet at any time”.

Shares in Alibaba on the Hong Kong exchange fell 2.15% on Monday.