Listen to this article
9 minutes
This feature is powered by text-to-speech technology. Want to see it on more articles?Give your feedback below or email audiofeedback@wsj.com.

The pandemic has been bad for the U.S., but truly catastrophic for the world’s poorest. Last year, the number of people in extreme poverty went up for the first time in two decades—by 90 million—wiping out four years of progress, according to the World Bank.

The long-term effect may be just as profound. This year, most emerging economies will grow, but few will recoup what they lost last year. Poverty, the World Bank projects, will remain flat or rise.

This isn’t because of Covid itself. Mortality rates have been much lower in developing countries, other than Latin America, than advanced. One reason is that emerging countries are younger and thus less susceptible: Just 2% of Ethiopia’s population and 6% of Peru’s is over 70, compared with 17.5% in Italy, according to Penny Goldberg of Yale University and Tristan Reed of the World Bank. Obesity, another pre-existing condition, is also less common, affecting just 2% of Vietnam’s and 11% of Ghana’s population, but 36% of America’s, they note.

What should the U.S. do to aid in global economic recovery from Covid-19? Join the conversation below.

Rather, the real damage has come from the economic repercussions of the pandemic, and how they exploited existing vulnerabilities: Emerging-economy governments have less freedom to aggressively deploy monetary and fiscal stimuli; are more exposed to rising barriers to trade, immigration and tourism; and often suffer from weak governance, high crime and corruption. The interaction of the pandemic-related recession and those vulnerabilities will hobble their ability to bounce back, perhaps for years.

“In the short run, things look better than expected, but in the long run, there are reasons to be very pessimistic,” says Ms. Goldberg, a former chief economist at the World Bank.

President-elect Joe Biden will be focused foremost on the U.S. economy when he takes office, but he will also have to deal with the repercussions of this uneven global recovery. Continuing hardship in Mexico and Central America, for example, will send more migrants to the Southern border. The U.S. may be called on to help bail out sovereign borrowers teetering on default. 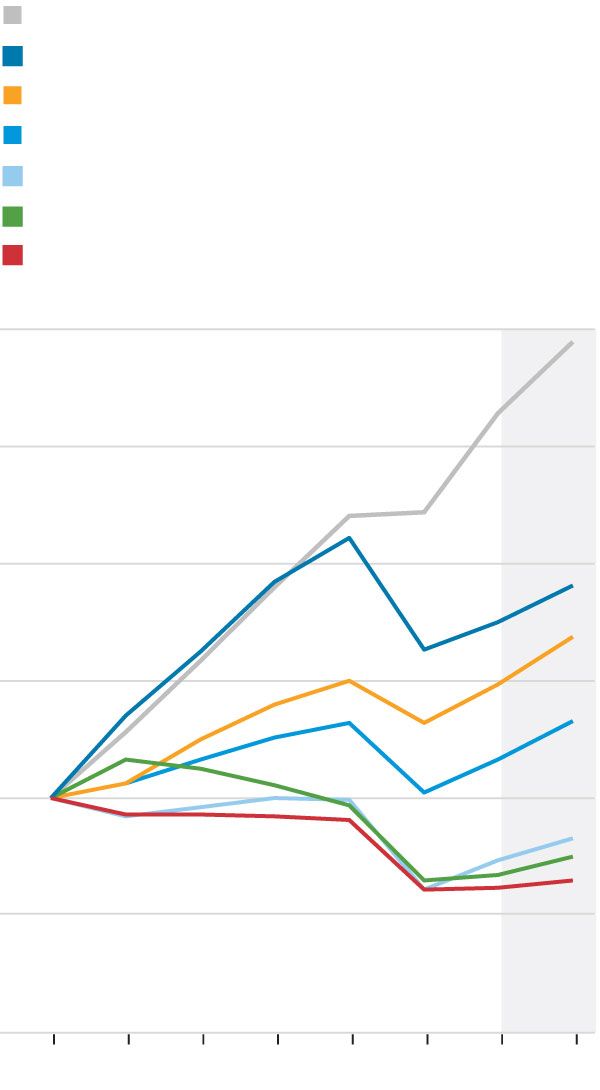 Latin America and the Caribbean

The recovery within the U.S. has been described as K-shaped, with the affluent and skilled faring far better than those on low pay. Something similar is under way between countries, though not uniformly. Among wealthy economies, the U.S. and Japan have fared better than Western Europe. Among emerging markets, the World Bank expects per capita incomes in East Asia to grow 6.8% this year. This is largely thanks to China, whose economy actually grew last year, but others in the region should more than recoup last year’s drop.

The outlook for other regions is grimmer. The World Bank sees just 2.8% per capita growth in Latin America and the Caribbean this year, 2.1% in South Asia and 0.1% in sub-Saharan Africa, leaving all of them well behind their pre-pandemic levels. In Latin America and sub-Saharan Africa, incomes will be lower in 2022 than in 2011, the World Bank projects. That is a stark statistic: It means the gap between the richest and many of the poorest countries will have widened over the past decade, instead of narrowing.

Advanced countries could run large deficits to support displaced workers and companies in part because central banks have held interest rates at or below zero and bought massive amounts of government debt. Central banks in emerging economies were afraid that doing the same would send their currencies plunging, which would have squeezed companies with extensive dollar-denominated debts, says Robin Brooks, chief economist at the Institute of International Finance.

According to the International Monetary Fund, fiscal relief was equal to 24% of gross domestic product in advanced economies, 6% in emerging middle-income countries and 2% in low-income countries.

Some countries with high debt loads were pushed over the edge by the pandemic; Ecuador, Argentina, Lebanon, Suriname and Zambia all defaulted last year. Others found their maneuvering room constrained. South Africa, for example, had a large budget deficit because of poorly performing state-owned enterprises and high wage bills.

This year, as the Federal Reserve holds interest rates near zero, emerging-markets currencies should strengthen, which could give their central banks more leeway to lower interest rates, Mr. Brooks predicts. Governments, however, may still be reluctant to borrow. Brazil implemented a big spending boost in 2020, but with its currency weak and bond yields rising will likely have to reverse course and tighten fiscal policy significantly in 2021.

Meanwhile, many emerging economies saw important external sources of revenue sharply cut during the pandemic—though not as badly as initially feared. These countries depend heavily on commodities, remittances from migrants in richer countries and tourism. Remittances fell 7% last year and will fall an additional 7.5% this year, according to the Global Knowledge Partnership on Migration and Development. In October, international tourist arrivals were down 83% from a year earlier, a severe blow to tourism-dependent countries like Thailand, Mauritius, Seychelles and Jamaica. With vaccinations rolling out slowly in most emerging countries, tourism may be very slow to return.

Commodities have rebounded since their spring collapse, but commodity-dependent economies never fully recovered from the collapse in prices back in 2014. International trade has fared better, recovering from most of its early plunge, a key reason for the upbeat performance of East Asia’s export-dependent economies. But deglobalization will likely be an enduring headwind.

“Poorer countries have always relied on the richer parts of the world, not only for direct aid but also connecting globally in terms of trade, investment and immigration,” says Ms. Goldberg. “The pandemic…gave people who are against globalization new arguments: The more integrated you are, the more exposed you are to international shocks.” This may benefit some, such as Vietnam, as Western companies shift supply chains out of China. But it will set back countries like India or those in Africa that may have emulated East Asia’s formula of export-led growth.

The pandemic’s effects have been aggravated by bad governance and threadbare public services. In many countries, health-care systems can’t adequately test, hospitalize and vaccinate, and schools closed without adequate remote learning for students.