An outbreak of a deadly pig disease may have set the stage for Covid-19 to take hold in humans, a new analysis has suggested. African swine fever (ASF), which first swept through China in 2018, disrupted pork supplies increasing the potential for human-virus contact as people sought out alternative meats.

Pork is the main meat source in the Chinese diet, and the country produces half of the world’s pigs, which generate roughly 55m tonnes of pork annually, forming an industry worth more than $128bn (£98bn). The ASF outbreak had spread across most of China by the fourth quarter of 2019. The disease is untreatable and incurable. Once it takes hold, the only solution is to kill infected animals.

The dramatic drop in pork supply, after restrictions on movement of pigs and culling led to price rises, escalated demand for alternative sources of meat to be transported nationwide. These sources included wild animals, thus greatly increasing opportunities for human-coronavirus contact, a team of researchers from China and the UK have suggested in a yet to be peer-reviewed analysis.

“If more wildlife enters the human food chain, either through [individuals] hunting … or going to market and getting different meat sources. If that increases, it could just increase the contact opportunity,” said the author of the study, David Robertson, professor of viral genomics and bioinformatics at Glasgow University. “You’re just increasing the opportunity for the [Sars-CoV-2] virus to get into humans.”

Key to averting another future zoonotic pandemic is the herculean task of figuring out how this one occurred. Disease detectives, including a team from the World Health Organization, are still following the trail, but many suspect Sars-CoV-2 probably originated in bats and spilled over into humans, possibly through an intermediary animal.

The first cluster of Covid-19 cases was detected in Wuhan, but it is possible the disease originated elsewhere. In January 2020, Chinese scientists made public the genetic sequence of the virus that came to be named Sars-CoV-2. Since then, scientists have shown the virus probably had at least its distant ancestry in the horseshoe bats of China’s Yunnan province.

Of a sample of 41 early confirmed cases of Covid-19, 70% of those infected were stall owners, employees or regular customers of the Huanan market, which sold seafood but also live animals, often illegally captured in the wild and slaughtered in front of customers. But the first confirmed case had no apparent connection to the market.

The newly published analysis, which implicates ASF as a driver of the spillover of Sars-CoV-2 into humans, presented a probable explanation of what occurred, said Robertson, noting that ASF could have caused a shortage of roughly 40-60% of China’s total pig population, causing massive disruption to the country’s meat industry.

“And so that potentially explains why there’s no direct connection [to the market in previous research], why we’re finding it hard to find the connection,” he said. “Because with that kind of a spillover, you would go to the market and you would expect to find infected animals still – and that’s not happened. And so, there is a puzzle, there’s a sort of a missing link.” 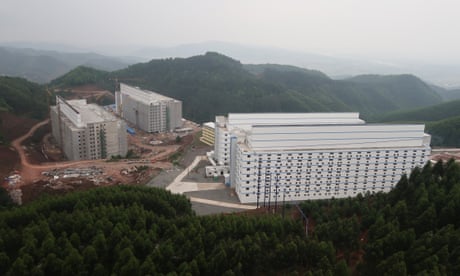 At the moment, the idea that a shortage of pork drove the spillover of Sars-CoV-2 into humans was only a hypothesis, he added. “We’re showing disruption … imagine a wall, it’s just a brick in that wall of evidence. It’s something that we think should be considered in the understanding of what unfolded.

“As is often the case in these kinds of investigations – it can take many years to disentangle the probable routes. [While] it is unlikely we’ll ever know exactly what happened – it does seem likely that we will find a virus close to Sars-CoV-2 from a bat, [or] maybe another species,” he added.

“And then from that, you can start to say, well, how did that get into humans?”