About 1,000 people have gathered outside a Hong Kong court where 47 pro-democracy candidates, campaigners and activists charged with conspiracy to commit subversion under the national security law are due to appear.

The group are accused of organising and participating in an unofficial primary poll in July last year aimed at selecting the strongest candidates for a legislative council election that the government later postponed, citing the coronavirus. Authorities said the informal poll was part of a plan to “overthrow” the government.

Foreign diplomats joined the crowds outside West Kowloon magistrates court on Monday, including Jonathan Williams, from the British consulate general. “The Chinese and Hong Kong authorities promised that the national security law would be used in a very narrow sense. It’s clear that that is no longer the case and that’s deeply concerning to us,” he told Bloomberg. 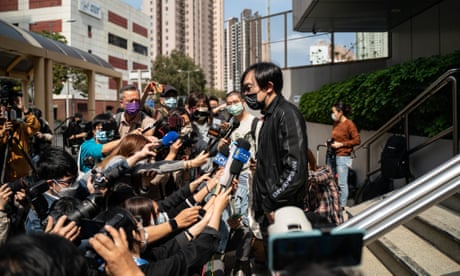 Williams was among the many consular staff and supporters hoping to get one of the 100 or so seats inside the courtroom to witness proceedings.

Security was tight, with about 100 police officers deployed as supporters gathered outside the court in one of the largest rallies since the coronavirus outbreak. The queue to enter the court stretched for more several hundred metres, nearly reaching around the entire block.

Most wore black in support of the detained. Some chanted: “Liberate Hong Kong, revolution of our times” and “Fight for freedom, stand with Hong Kong”, now-illegal slogans that were popular during anti-government protests that roiled the city in 2019.

Students at a nearby primary school shouted “Hong Kong, add oil” from their balconies. Others raised the three-finger salute that has become the symbol of protest against authoritarian rule in Myanmar.

Herbert Chow, 57, who was queuing outside the court and wearing a black face mask, said: “This is the most ridiculous arrest in the history of Hong Kong. But I have confidence in our judicial system to restore justice. It’s the last line of defence.” 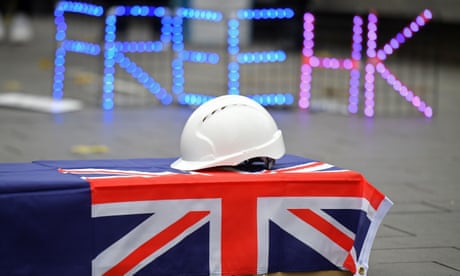 Kristine, 20, said she had been there since 5am. “We have been taking shifts since yesterday. Our friend is among those charged. I want to tell my friend that we are willing to sacrifice ourselves for our city.”

Nearly every major voice of dissent or figure of opposition in Hong Kong is now in jail, in exile, or on trial. In another courtroom the trial continued of nine pro-democracy figures, including Martin Lee, Lee Cheuk-yan, Jimmy Lai, and Leung Kwok-hung – who was among those charged on Sunday – for organising an unauthorised assembly in 2019.

The group of 47 – 39 men and eight women aged 23 to 64 – were charged on Sunday under the national security law, which punishes what China broadly defines as secession, subversion, terrorism and collusion with foreign forces with up to life in prison.

The wording of the national security law makes it near impossible for anyone charged to be granted bail. Media mogul Jimmy Lai, has been in and out of court attempting to challenge it, even agreeing to strict house arrest, but remains in jail.

The charges related to unofficial primaries held by the pan-democrat camp last year, in an attempt to find the strongest candidates to run in Hong Kong’s election and win a majority in the 70-seat legislative council. More than 600,000 Hongkongers turned out to vote in the polls, but authorities claimed the plan, dubbed “35-plus”, aimed to “paralyse” the city’s government by voting against its legislation, and thus illegal.

According to the charge sheet released on Monday, they stand accused of conspiring together and with other persons “with a view to subverting the state power, to organise, plan, commit or participate in, by threat of force or other unlawful means”.

It said the group schemed to abuse the powers and functions of elected legislators to use a controlling majority to “indiscriminately refuse to pass any budgets … regardless of their contents or the merits of their contents”, to compel the chief executive to dissolve parliament and “paralyse the operations of the government”, and to prompt her resignation.

The alleged plan amounted to “seriously interfering in, disrupting or undermining the performance of duties and functions in accordance with the law”, it said.

Many predicted charges were coming after the individuals were told on Friday to report to police a month earlier than previously instructed. Some began making preparations on the expectation they would be denied bail, including spending time with family, arranging care for their pets, and buying comfortable clothes for prison.

Sunday’s charges drew international condemnation and calls for the release of the detainees. The European Union said the charges made clear that “legitimate political pluralism will no longer be tolerated in Hong Kong”.

US secretary of state, Anthony Blinken, condemned the charges. “Political participation and freedom of expression should not be crimes. The US stands with the people of Hong Kong,” he said.