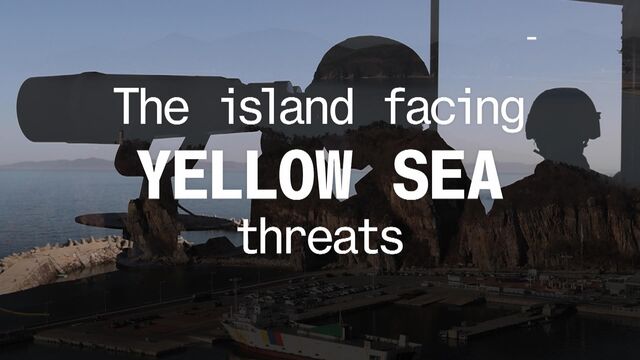 Ever since fighting ended in the Korean War nearly seven decades ago, Baengnyeong has been a key location for U.S. allies in Seoul to spy on North Korea. Yet now the island is on China’s radar.

China spooked South Korea in December by sending a warship past a self-imposed boundary near the island to probe the limits of the country’s claims in the Yellow Sea. The move, described as rare by South Korean lawmakers, comes as China’s military bolsters its presence in the disputed waters.

Roughly 5,000 residents on Baengnyeong have also become wary of an influx of Chinese fishing boats near the island, which sits in a strategic location perpendicular to the Bohai Strait — the main waterway providing access to Beijing. In years past the island’s quartzite beach — one of a handful of natural runways in the world — was used for sorties in the Korean War.

“North Korea was definitely our major concern,” Park Soon-ae, who collects seafood on the island for a living, said as about a dozen Chinese fishing boats bobbed in waves nearby. “You see the sea behind me? That sea will be filled with Chinese fishing vessels in a few weeks when the crab season comes. And now what, warships? This can’t be true.”

Much of the focus on Beijing’s naval expansion often revolves around Taiwan and disputed territory with American allies Japan and the Philippines, which together make up the so-called First Island Chain blocking China from easy access to the Pacific Ocean. But China’s increased activity in the Yellow Sea — known as the West Sea in Seoul — shows that Beijing is also worried about a scenario in which the U.S. imposes a blockade much closer to its shores.

“China wants to make the sea a buffer zone to expand its maritime influence and secure a path for its fleets to exit to the south — and the ROK stands in its way of realizing that goal,” said Shin Won-sik, a former general in South Korea’s military who now serves as a lawmaker with the parliament’s Defense Committee, referring to South Korea’s official name. “Its ultimate goal is to gain full control in the West Sea, to prohibit the U.S.’s maritime activity in the waters and enable swift military action in times of emergency.”

Caught in the middle is Baengnyeong, which sits just 13 kilometers (8 miles) from North Korea and has long been a focus of intelligence agents from the two Koreas. South Korea’s military has installed dozens of radars on the island, some easily seen by the public. In 2013, North Korean leader Kim Jong Un stared at the island through binoculars and threatened to engulf it in flames. A year later a North Korean drone crashed on Baengnyeong in an alleged attempt to spy on South Korea’s surveillance capabilities.

Lines in the Sea

One key problem is that three unilateral maritime boundaries near the island remain disputed, opening the door for potential conflict. Back in 1953, after fighting stopped, U.S.-led forces unilaterally drew a maritime border known as the Northern Limit Line (NLL) that put Baengnyeong and other islands under South Korea’s control. In 2010, an international investigation concluded North Korea torpedoed the South Korean warship Cheonan near the island, killing 46 sailors — an allegation Pyongyang denies.

Beijing authorities set a boundary in 2013 staking out China’s so-called maritime Area of Operations (AO) line along 124 degrees east longitude in the Yellow Sea about 50 kilometers west of Baengnyeong. The headquarters of China’s North Sea Fleet sit across the waters in the port of Qingdao, and the deployment of new aircraft carriers requires more space to maneuver in the Yellow Sea.

South Korea’s territorial claims, meanwhile, extend 20 kilometers west of Baengnyeong, with a buffer zone of about 30 kilometers between its line and China’s boundary. According to military documents acquired by Shin through his position on the Defense Committee, Chinese ships appeared near Beijing’s self-claimed AO every day last year to “patrol and monitor its neighboring countries’ military power.”

In December, Shin added, Beijing sent a patrol ship into the buffer zone about 40 kilometers away from Baengnyeong, prompting South Korea’s Navy to respond immediately by sending a battleship that was guarding the Northern Limit Line. Shin, who is a member of the main opposition People Power Party, said the Chinese aircraft carriers Liaoning and Shandong conducted around 20 maritime exercises last year in the area while anti-submarine drills took place about 10 times.

South Korea’s Joint Chief of Staff had no comment on Shin’s remarks or Chinese patrols. China’s Foreign Ministry didn’t respond to a request for comment about Chinese military activities near the island.

China’s goal in the West Pacific is to deter the U.S. and its allies from projecting power in areas containing core national interests, according to Zhao Tong, a senior fellow at the Carnegie–Tsinghua Center for Global Policy in Beijing.

“This requires the PLA to prioritize the modernization of its naval power and acquire sea-control capabilities to deny access to key theaters around its coast,” Zhao said, referring to the People’s Liberation Army in China.

For China, which often casts President Xi Jinping’s policies in historical terms, memories of foreign armies descending on Beijing through the Bohai Strait are still relevant. China reacted harshly when the U.S. sent an aircraft carrier to the Yellow Sea in 2010 for a joint naval drill with South Korea, according to Zhang Baohui, director of the Center for Asian Pacific Studies at Lingnan University in Hong Kong.

“The Yellow Sea constitutes a core national security interest of China,” he said.

While Chinese trawlers have fished near South Korea’s waters for years, tensions with China began to ratchet up in 2016. South Korea accused Chinese fishing boats of deliberately ramming a South Korean Coast Guard cutter, causing it to sink.

China has used fleets of trawlers to assert territorial claims in other places around Asia such as the South China Sea. In March, the U.S. and Philippines blasted China for sending a “maritime militia” of more than 200 vessels to a disputed reef in the waters. Beijing insisted they were merely sheltering from bad weather.

On Baengnyeong, residents are growing impatient with China’s moves and want President Moon Jae-in to do more. South Korea’s leader has sought to balance ties with China, the country’s biggest trading partner, and the U.S., its main security partner for more than seven decades.

South Korea is planning to build airports to serve civilian and military aircraft on Baengnyeong and the Yellow Sea island of Heuksan further to the south. Residents said the airport would help them feel safer, but they wanted the government in Seoul to do more to deter China.

“The military and Coast Guard should crack down on these Chinese fishing boats,” said Im Goon-jae, a 63-year-old resident who works for the island’s hospitality industry. “They need to block them far out.”