It brings the memories flooding back, and not in a good way. Inflation in the U.S. is now up to 6.8%, its highest level since March 1982, when everyone was listening to the J.Geils Band and Joan Jett and the Blackhearts. For my first attempt to get to grips with the numbers, take a look at the latest Risks and Returns discussion with Lisa Abramowicz, which we recorded from my place of self-isolation in London: 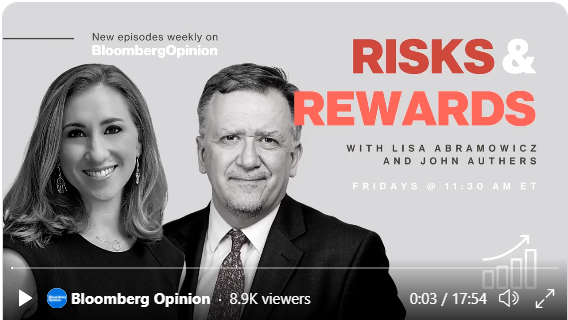 I think our main point of agreement was that the markets’ complacency about the numbers was concerning. It’s true that the November figures were roughly in line with expectations (as noted by Paul Krugman in the New York Times) and was not another of this year’s big surprises. But there was plenty in the report to convince skeptics that this dose of inflation will not go away of its own accord (you can read my considered take from Friday here). It will need some changes to monetary policy to dislodge it, and that opens up the possibility of a mistake.

Here are the most important points from the report as I see them. First, shelter inflation, which makes up a third of the CPI index, has risen to its highest level since 2007: 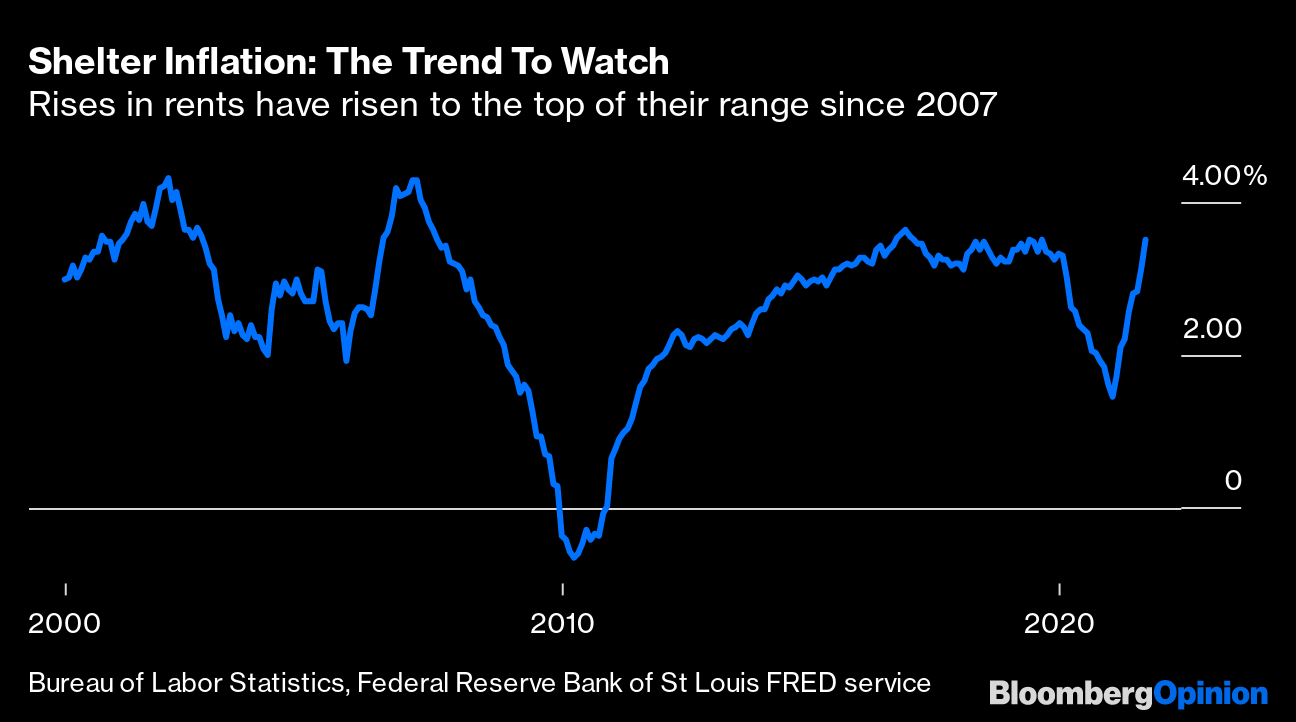 Inflation in rents is still not that high, but the whole index is geared to it. As rents tend to follow house prices upward with a lag, and house prices have surged since the pandemic, it’s reasonable to expect this number to rise for a while longer. Measurement of shelter costs is the single most controversial aspect of the official inflation statistics. The conceptual problem is that a rise in house prices for those who already own a house actually reduces their cost of living by increasing their wealth and making it easier to borrow.

I personally doubt that the figures are deliberately and malignly manipulated downward, but it’s certainly true that other reasonable ways of measuring rental inflation would put them much higher. The hedge fund manager Bill Ackman garnered a lot of attention for his Twitter thread pointing out that large owners of rental properties are citing a 17% increase in rents over the year. Inputting this in place of the official figure would take the headline rate of inflation up to 10.1%. It’s fair to expect rents to put upward pressure on inflation for a while.

Second, it’s noticeable that this inflation scare is an unusual one. As I argued Friday, it wasn’t necessarily mad to think that inflation was purely transitory back in April and May. At that point, the rise in prices was dominated by a few categories most affected by the pandemic. A few outliers were pushing up core inflation to an unprecedented extent. What is worrying is how that dynamic has now changed.

The Atlanta Fed keeps separate indexes of CPI components whose prices can be easily and quickly adjusted, and of those that are “sticky.” The rise in “flexible” prices earlier this year was the highest on record, including at any point during the 1970s: 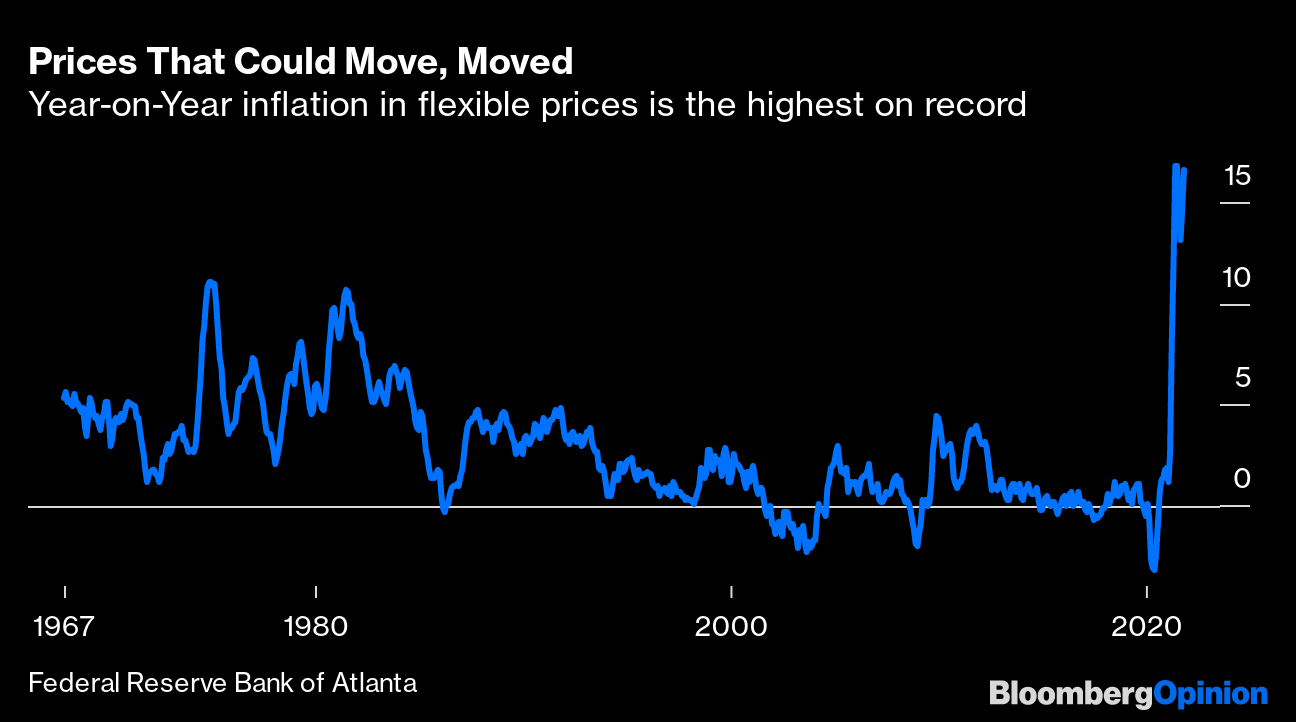 Here is sticky inflation over the same period, shown on a month-over-month basis. As might be expected, it is almost never negative, but also much steadier: The sticky problem is nothing like as severe as it was in the 1970s, which is encouraging. A few months ago, when it barely seemed to be moving, thinking that inflation was transitory seemed reasonable. Now, that is changing because sticky price inflation is picking up. Here is the same chart for the last 20 years so the movement in recent months is clearer: 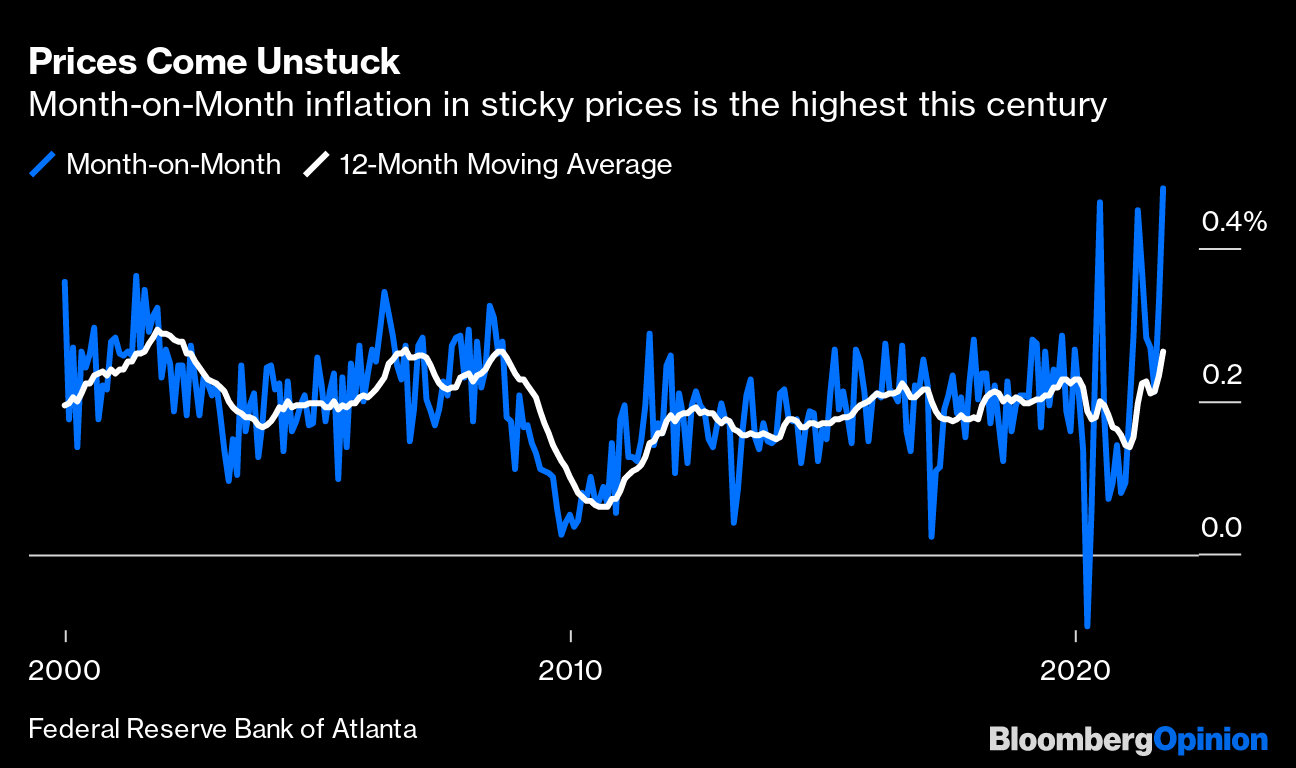 Central bankers should be very anxious to ensure that sticky price inflation does not rise any further.

Another problem is that while inflation was originally concentrated in sectors directly affected by economic re-opening after the pandemic, that also is changing. The following division of inflation into energy, reopening and non-reopening sectors is from Bloomberg Opinion colleague Jim Bianco of Bianco Research: To make the trend clearer, the following chart shows just inflation in the non-reopening components: The rises in sticky inflation and in sectors not directly affected by the pandemic are exactly the things that earlier this year the Fed hoped would not happen. It increases the pressure to craft a response. Despite this, long rates in the bond market suggest minimal concern that the Fed will need to tighten policy very much. The “terminal rate,” to use the jargon, remains very low at not even 2%. This looks overly hopeful to me. A central bank is nothing without a reputation. If consumers and investors don’t trust it to keep inflation under control, it has no alternative but to overshoot aggressively (as Paul Volcker did four decades ago). There has to be a risk that happens. This was Bianco’s conclusion:

So what does this all mean? The Fed is often criticized for hiking rates until something breaks. We believe the low terminal funds rate means it will not take much to break the economy.

Relentlessly rising short rates are a signal that the Fed is behind the curve on inflation and needs to hike aggressively. Sideways long rates and a flattening yield curve could reflect the market’s fear that the Fed will impair the economy.

If the Fed does not address inflation soon, they risk long rates shooting much higher. But if they follow the market’s lead in aggressively hiking rates, they risk hurting the economy. We understand the Fed’s paralysis given the massive uncertainty coming out of the pandemic. However, the longer they wait to address inflation, the worse this conundrum will become.

Mitigating circumstances include that companies and individuals are flush with cash at present; there is more of a cushion if the Fed decides to tighten than there usually is. Also, with the U.S. stock market at record levels, and with the yield curve still a ways from inversion, there is room for the Fed to push down the prices of stocks and short-term bonds without “breaking something,” although this risk is plainly rising.

Mohamed El-Erian, another Bloomberg Opinion colleague who has been outspoken about the dangers of inflation this year, is similarly critical of the Fed. On Sunday, he described the earlier assessment that inflation was transitory as its “worst-ever call” on CBS television. Asked if he wanted the Fed to “slam on the brakes,” he said this:

The full transcript can be found here. In effect, this is an argument for the Fed to announce a much faster timetable to taper off its asset purchases. At this point, it would be a major surprise if this did not happen when the results of its latest policy meeting are announced Wednesday. What might be more important, and what might have more of an impact on the bond market, would be to shift projections for future interest rates sharply upward. Now that the Fed seems to have admitted that it was wrong about its “transitory” call (and it was an understandable error, albeit a very costly one), it needs to take control of the agenda once more.

The biggest outbreak of inflation in four decades has also been possibly the weirdest outbreak ever. Many assumptions have been challenged. Now that it’s clear that this year’s inflation is more than a transient blip, the Fed needs to show that it can adapt — and the bond market needs to adapt to the new approach.

Stock markets, as already mentioned, are doing fine. However, there are growing questions about breadth. Advances are being led by the U.S. and within the country by a tiny coterie of large stocks. Many smaller stocks have suffered dizzying falls from their highs. This chart, from Crescat Capital LLC using Bloomberg data, has rightly garnered a lot of attention: 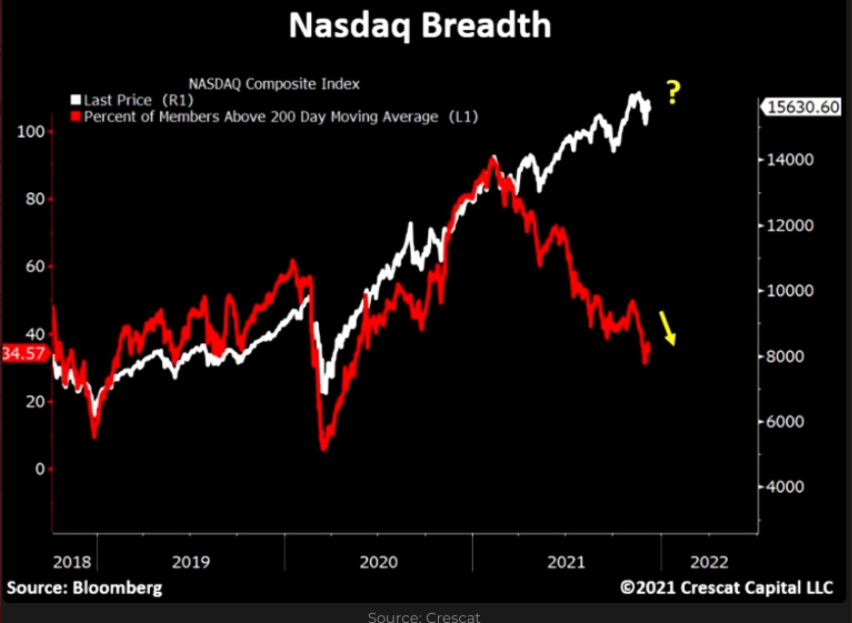 To illustrate this a different way, the following charts from Andrew Lapthorne, chief quantitative strategist at Societe Generale SA, show the percentage of stocks in the Nasdaq that are down 20% and 50% from their highs. Viewed as a percentage of companies, more than half are down by more than 20%. But viewed as a share of market cap, the problem looks contained:

Concentration in industries has been a growing problem for years, and has arguably contributed to inflation by boosting the competitive position and pricing power of a few big companies. Investors in the Nasdaq increasingly seem to think that only a few companies have much of a chance. With a growing possibility of more aggressive attempts to prosecute antitrust issues, that’s a riskier position than it appears.