Meanwhile, Back in Shanghai…

Somehow, China’s currency doesn’t come up in conversation so much any more. The mercantilist approach of the Trump administration has been abandoned, and the level of the yuan is no longer a geopolitical flashpoint. However, perhaps we should all pay more attention.

The​ yuan is now at its strongest in more than three years versus the U.S. dollar. The last time it was at this level​ came in the summer of 2018, when Washington amped up its trade war rhetoric with extra tariffs, and China responded by allowing its currency to devalue, making its exports more competitive with U.S. goods.​ Continued rounds of tariff and protectionist bombast eventually brought the yuan to 7 per dollar in 2019, having at one point been below 6.3

This​ is based on consumer price inflation, while China’s export trade is driven mostly by industrial goods and manufacturing, so it arguably fails to capture underlying Chinese competitiveness. If we instead look at a real rate based on comparing producer price inflation rates, we find a far more erratic pattern, but with the same ultimate result.​ China’s exchange rate currently renders its industrial products less competitive than at virtually any time since 2015: 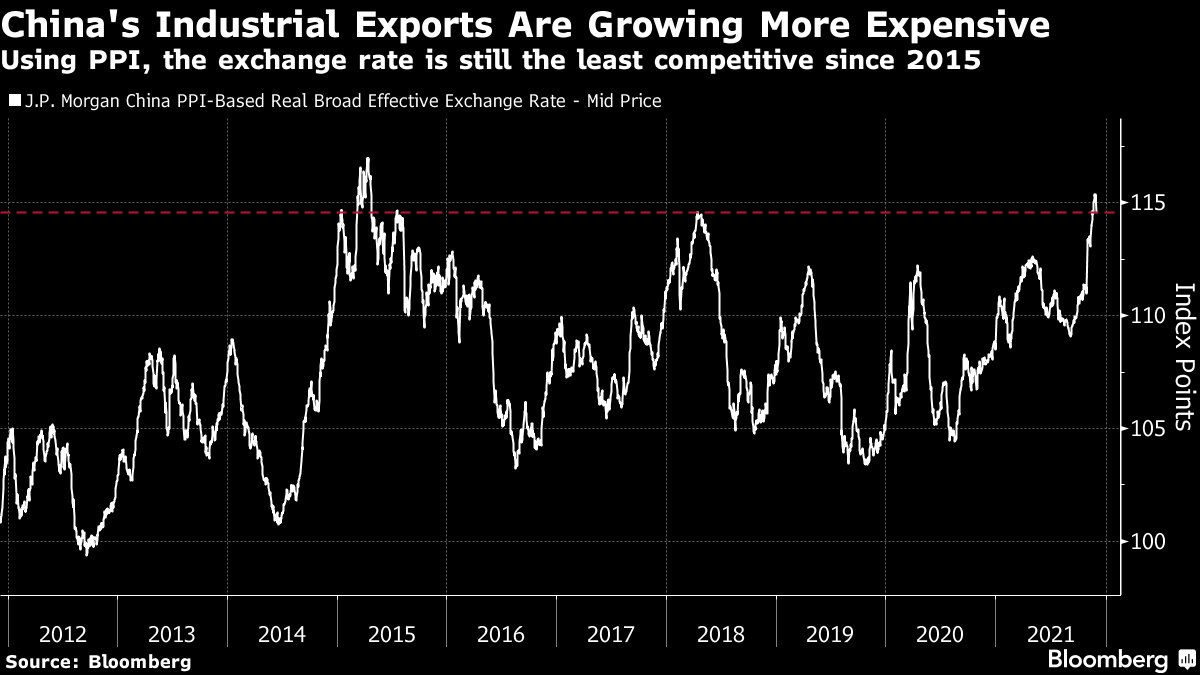 This makes it easier for the U.S. to resist Chinese imports and to sell goods to China. But while that issue seemed to matter under Trump, the focus has now moved on to inflation. If Chinese stuff is more expensive, and Americans still want to buy a lot of it, that means inflation will go up. This is a potentially profound development. For​ a generation, China aroused American ire​ by effectively exporting deflation. Chinese workers would labor​ for far less than Americans, and so Chinese exports put a brake on price rises in the U.S., but also led to the hollowing out of much of the manufacturing-based working class. Now, just as the issue has turned to price rises, a stronger exchange rate would mean that China is effectively exporting inflation.

For a really exhaustive attempt to capture what has happened since China acceded to the World Trade Organization, try the following chart produced by Daniel Tenengauzer, foreign exchange analyst at Bank of New York Mellon Corp.,​ which combines three separate ways to value currencies:​

BEER is a balance of payments equilibrium exchange rate. This framework estimates the necessary REER change to close the gap in external accounts.

All this number-crunching reveals that China’s currency was indeed radically undervalued during the years of its mega-growth before the Global Financial Crisis. It has been overvalued, on the BNY Mellon​ methodology, for the best part of a decade, and has also been even more overvalued than the dollar. At present, both currencies are overvalued Again, we can see that China reached very difficult territory in 2015, and that if the currency appreciates much more​ it could find life similarly hard. There are many reasons to expect the yuan to weaken; the ongoing crisis surrounding the property developer China Evergrande Group and the domestic real estate market means monetary easing of one kind or another is likely. Meanwhile, as amply discussed recently, it looks like the U.S. will be tightening monetary policy, which all else equal should strengthen the dollar.​

But as of now, there is no sign that China is bothered by having a strong currency. Indeed, a less competitive yuan​ would make sense, as it’s​ part of China’s long-term ambition to grow less dependent on exports, and to build up its own currency as a separate pole to the dollar. Louis Gave of Gavekal wrote​ earlier this week:

priorities in China have changed from creating jobs at any cost, to something else...​ ​ I have argued that China’s new economic imperative has become dedollarization, which inherently means a stronger renminbi. And a stronger renminbi is deflationary within China, but inflationary for everyone else. In short, deglobalization, Western efforts to “reshore” supply chains and China’s changed policy priorities would seem to lie behind today’s shift from disinflation to inflation.

And there’s another way in which China has been kind enough to export deflation to the rest of the world, which Gave also points out. The two decades of China’s WTO membership have seen the country enjoy economic growth that has been mostly coal-powered. For many reasons, coal is a cheap way to produce energy. Meanwhile, the rest of the world has been trying to shift to other forms of energy, which tend to be more expensive. In effect, Gave shows in the following chart, the worlddidn’tdidn’t just outsource its labor force to China. It​ also outsourced use of coal:

China now has an appalling pollution problem, and probably wants to stop burning so much coal. Its recent energy crisis is a sign of​ attempts to shift away from coal reliance. That leads to an​ uncomfortable conclusion:​ either China keeps polluting itself (and the rest of the world), or it doesn’t and other emerging countries do so instead. Or,​ none of them keep burning coal. In all these scenarios, that thereby increases the prices of the goods China​ sells to everyone else.​

You could argue that this is a price worth paying in the battle against climate change. And the levels of pollution in China’s​ big​ cities are horrifying; the​ leadership would be remiss if if didn’t try to do something. But the bottom line is that the rest of the world needs to get used to monitoring​ China as a potential source of inflation, not deflation.

How Benchmarks Became Our Pilots

Indexes and benchmarks are supposed to be passive. In the same way that a map is a useful tool to help us find the best route to where we want to go, an investment benchmark is supposed to help​ tell us how well we are doing and how much we’re​ deviating from a standard course. Except that benchmarks have now made the same kind of transition that happened when most of us shifted from reading a map to listening to orders barked​ by our mobile phone.​

Index investors have no choice but to buy exactly what is in the index they track. Meanwhile, the incentives for​ active managers are to stay close to the benchmark they’re​ tracking. They are judged primarily by​ performance relative to their peers, and know that the greatest risk of seriously weaker performance is to deviate widely from​ the rest of the crowd.

Benchmarking is now beginning to have perverse effects on companies’ incentives. An academic paper last year diagnosed an “Index Inclusion Subsidy.”​ Effectively,​ companies that are guaranteed ongoing flows of capital from index funds can afford to be much more enthusiastic about paying top dollar for acquisitions; after all, people are still going to have to buy their stock. The report summarizes the effect as follows:

Benchmarking generates additional, inelastic demand for assets inside the benchmark. This leads to a “benchmark inclusion subsidy:” a firm inside the benchmark values an investment project more than the one outside. The same wedge arises for valuing M&A, spinoffs, and IPOs. This overturns the standard corporate finance result that an investment’s value is independent of the entity considering it.

It’s worth reading. This subsidy will persist at least until investment flows into passive funds turn negative.​ However, the distortions caused by the power of indexing go beyond passive funds. Their impact on active managers may be even more important.

An active manager doesn’t want to differ too much from the index, to avoid embarrassment. But they​ also need to justify their fees; if they just match the index, investors can get their services cheaper elsewhere. And they also want to have a reasonably balanced portfolio, without excessive holdings in a few stocks. If you’re​ an active manager who thinks Apple Inc. or Microsoft Corp. are​ too cheap, it’s going to be difficult to make that hunch pay, compared to the index, unless you buy a huge amount of their stock. This means, as the following chart from Morgan Stanley & Co. shows, that the effect of indexing is to leave the biggest mega-caps under-owned by active managers.​ The chart was compiled by examining the holdings of the largest 100 institutional equity holders, and comparing those holdings with their index weights.​ In the case of Microsoft and Amazon.com Inc., active managers are underweight in them by about a third: 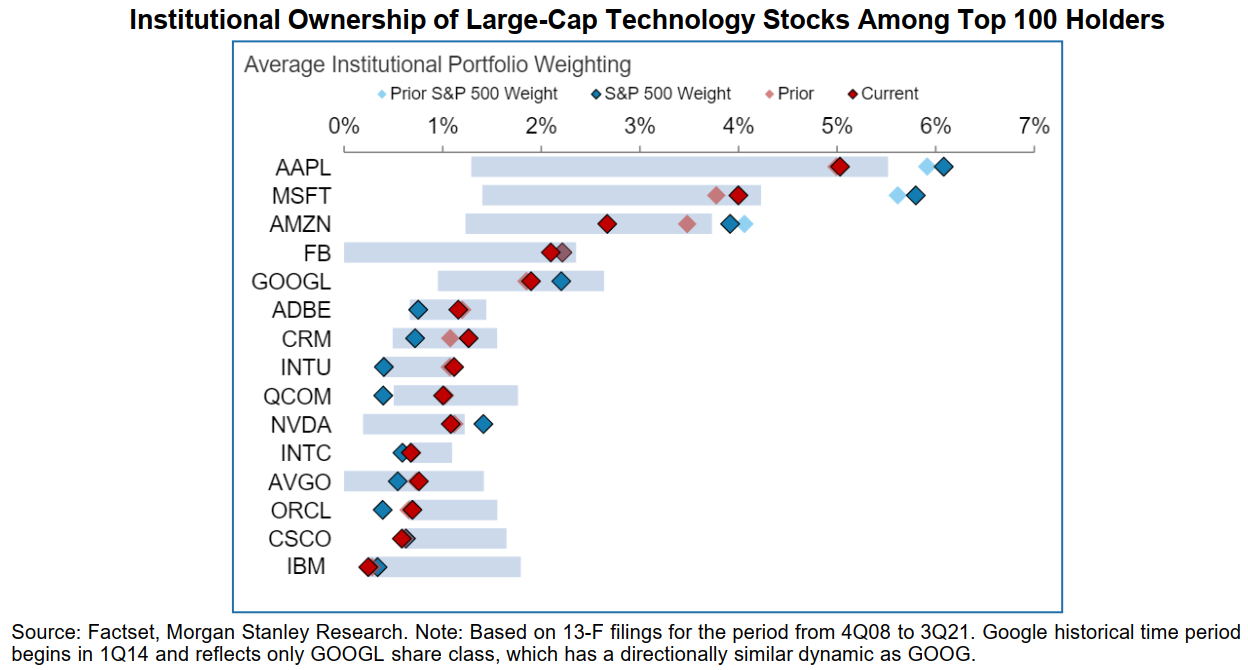 As of 3Q, some of the biggest tech platforms (Microsoft, Apple, and Amazon) are showing record gaps between their active vs. passive ownership. Further, our Sector Quant team’s analysis of all companies in the S&P 500 indicates that after adjusting for market cap and earnings beats, there is a statistically significant relationship between low active ownership relative to the S&P 500 and next quarter’s stock performance.

In other words, by holding back from filling their boots​ with Apple and Microsoft, active managers leave those companies undervalued. That leaves money on the table, and leads to those stocks subsequently outperforming as investors catch up. Being underowned is bullish. So the nightmare logic is that indexing creates an incentive for active managers to be underweight the biggest stocks —​ and that by doing this they create the likelihood that they’ll miss out on subsequent returns as money continues to go into passive funds.​