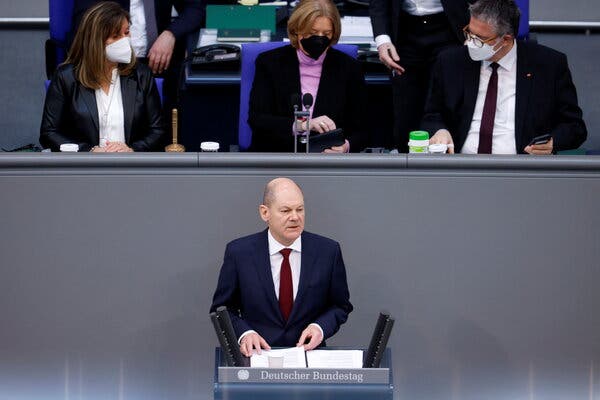 BERLIN — In an extraordinary address to a special session of Parliament on Sunday, Chancellor Olaf Scholz announced a significant increase in military spending, reversing the country’s longstanding policy that has favored deterrence over conflict.

Mr. Scholz announced a one-time increase of 100 billion euros ($113 billion) for defense spending and a pledge to spend more than 2 percent of Germany’s economic output annually on defense. He also proposed enshrining that threshold in the country’s constitution, ensuring that future governments follow it.

The moves were part of an astonishing — and sudden — reversal to decades of German foreign policy that have come as European nations join together to oppose Russia’s invasion of Ukraine. Mr. Scholz described the Russian military action as having “created a new reality” that “requires a clear response.”

Over the past 24 hours, Germany’s foreign and military policy have undergone startling changes. The government announced on Saturday that it would send 1,000 shoulder-launched anti-tank rockets and 500 surface-to-air Stinger missiles to Ukraine, pushing aside a long-held government policy not to send weapons to conflict zones. Germany also announced that it had allowed the Dutch government to send Ukraine 400 German-made anti-tank weapons and the Estonian government to send nine Cold-War-era howitzers, transfers that it had blocked for months.

The German government also said it would work with allies to cut off key Russian banks from the money transfer network known as SWIFT, and announced it would close German airspace to Russian civilian aircraft.

Just weeks ago, the German government was pilloried for what critics called its tepid response to Russia’s troop buildup, after it announced that it would send Ukraine 5,000 helmets and a field hospital to help the country defend itself.

Mr. Scholz also sharpened his rhetoric against President Vladimir V. Putin of Russia, whom he said on Sunday “has coldbloodedly launched a war of aggression. For one single reason: the freedom of Ukrainians challenges his own oppressive regime.”

Maintaining defense funding at 2 percent of gross domestic product is a goal set for NATO member states that Germany has not met since the end of the Cold War. To reduce reliance on Russia for energy, Mr. Scholz also announced the building of two liquefied natural gas terminals in Germany, following his government’s decision last week to halt the Russia-to-Germany Nord Stream 2 gas pipeline.

Andriy Melnyk, the Ukrainian ambassador in Berlin whose demands for German weapons fell on seemingly deaf ears for months, watched the speech from the visitors’ balcony and was given a minute-long standing ovation by lawmakers of all parties. In another show of unity in Germany’s normally fractious Parliament, even most lawmakers of the far-right, who usually loudly oppose speeches coming from the government, applauded parts of Mr. Scholz’s remarks.