Sign up for the Russia-Ukraine War Briefing.  Every evening, we'll send you a summary of the day's biggest news.

Russia’s international disinformation campaign seemed to flounder in the early days of the invasion, as narratives about Ukrainian bravery dominated the internet. But in Russia, the country’s propaganda machine was busy churning out a deluge of misinformation aimed at its own citizens.

The narrative disseminated online through state-run and unofficial channels has helped create an alternate reality where the invasion is justified and Ukrainians are to blame for violence. To control the narrative at home, Russia also shut down access to several websites and threatened the news media with long prison sentences for criticizing the war. There’s some evidence that the effort has mollified at least some Russians.

Here is what the war looks like to Russians, based on a review of state news articles, channels on the popular chat app Telegram, and input from several disinformation watchdogs who are monitoring Russia’s propaganda machine. 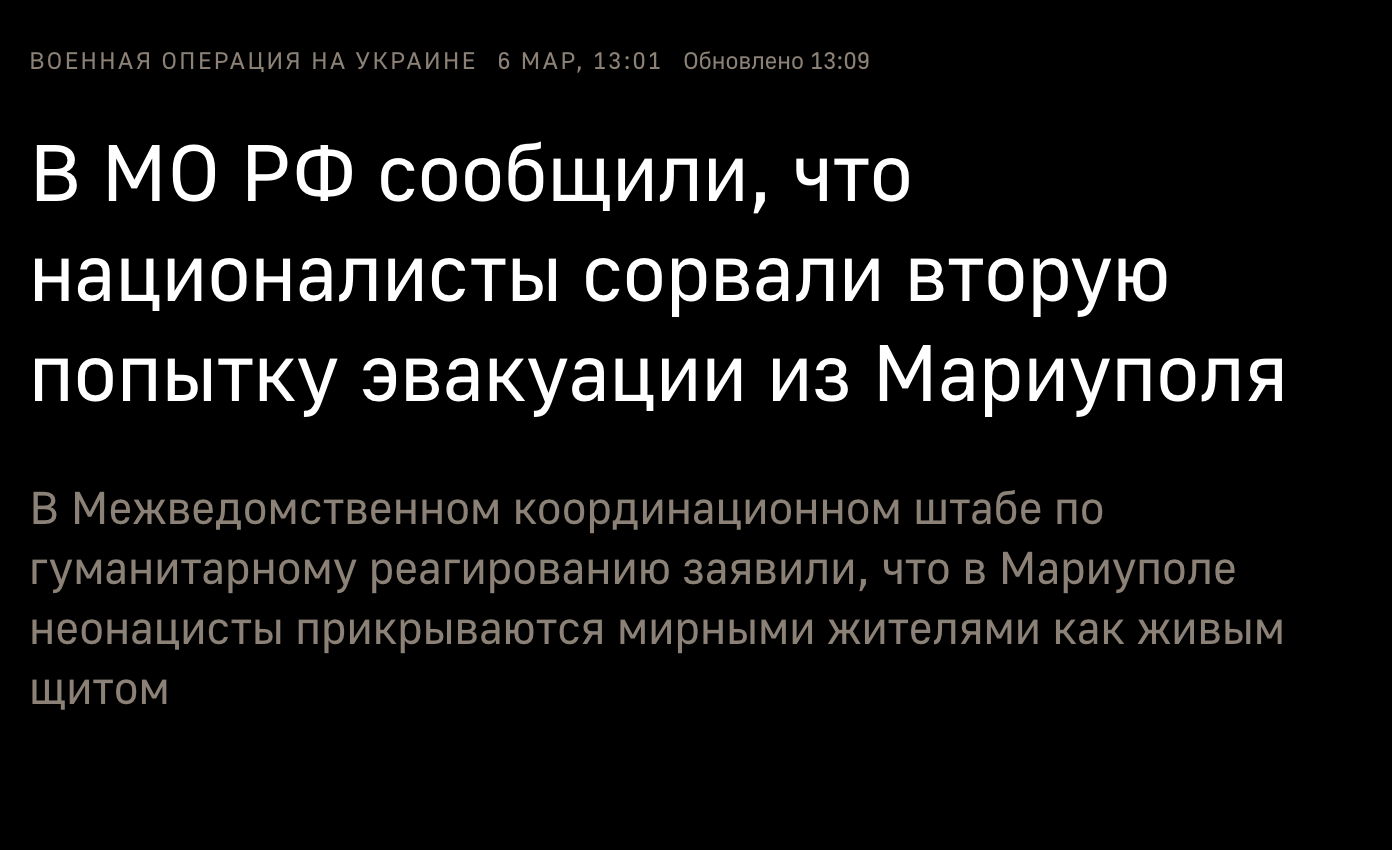 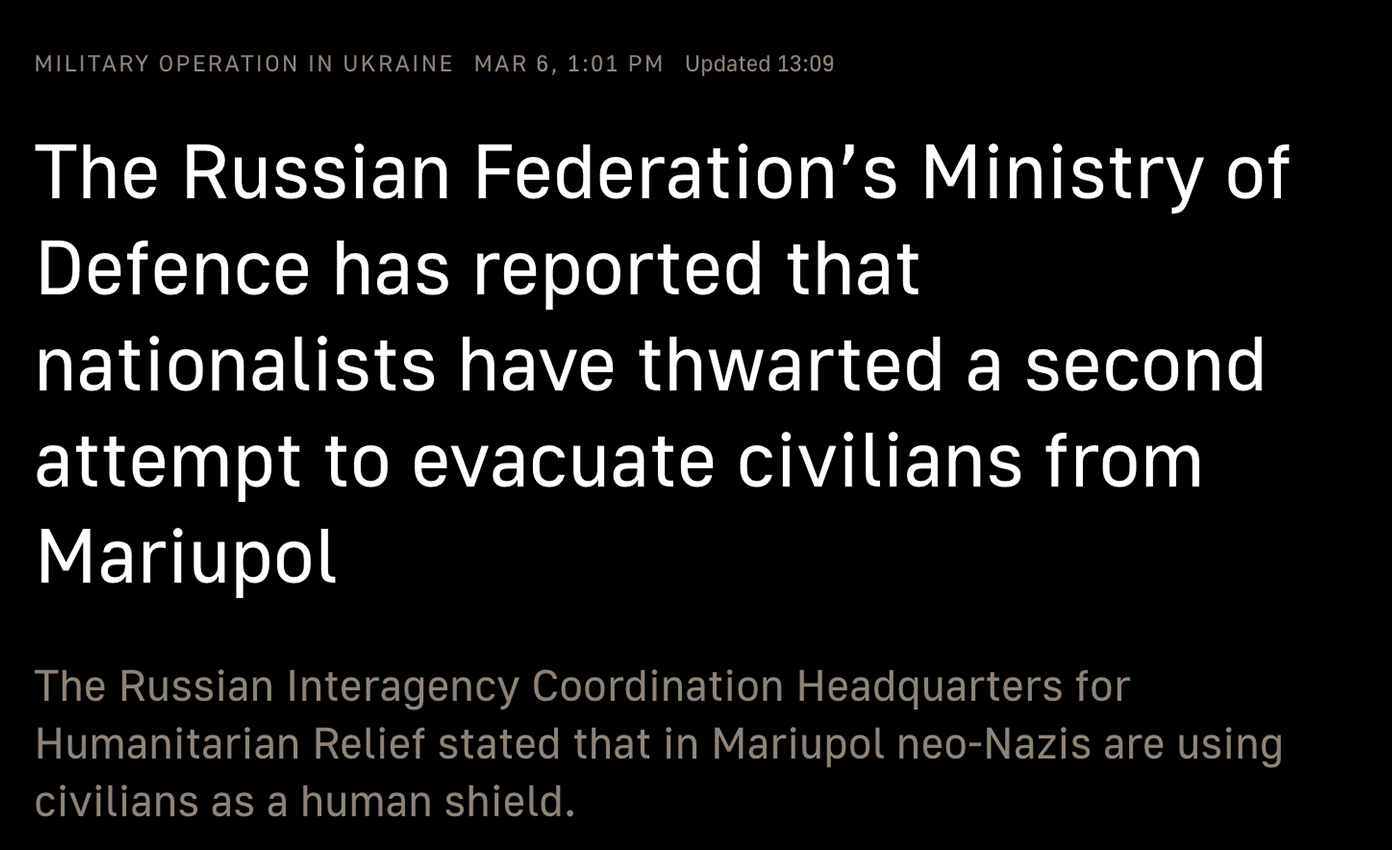 A headline from the Russian state news website Tass.
Translated into English. Tap for the original.

Some of the most disturbing images from the war have come from Mariupol, a port city in the southeastern coast. Shelling battered the region, killing several civilians who were trying to flee the area, during what was supposed to be a cease-fire.

But Russians got a different explanation online: Ukrainians had fired on Russian forces during the cease-fire, and neo-Nazis were “hiding behind civilians as a human shield,” according to the Russian state news website Tass.

Neo-Nazis have been a recurring character in Russian propaganda campaigns for years, used to falsely justify military action against Ukraine in what Russian officials have called “denazification.” Those claims have only continued during the conflict. To explain away attacks on other Ukrainian apartment buildings, the same article by Tass claimed that neo-Nazis had placed “heavy weapons in apartment buildings, while some residents are forcibly kept in their homes,” providing no evidence.

Russian social media accounts have used a mix of fake and unconfirmed photos showing Ukrainian soldiers holding Nazi flags or photos of Hitler. An analysis by the Center for Information Resilience, a nonprofit focused on identifying disinformation, showed that the number of tweets connecting Ukrainians to Nazis soared after the invasion began.

“Propaganda works when it coincides with your existing assumptions,” said Pierre Vaux, a senior investigator at the Center for Information Resilience. “The stuff that chimes into the Nazi stuff is really effective.”

After a nuclear facility caught fire, Russians claimed they were protecting it. 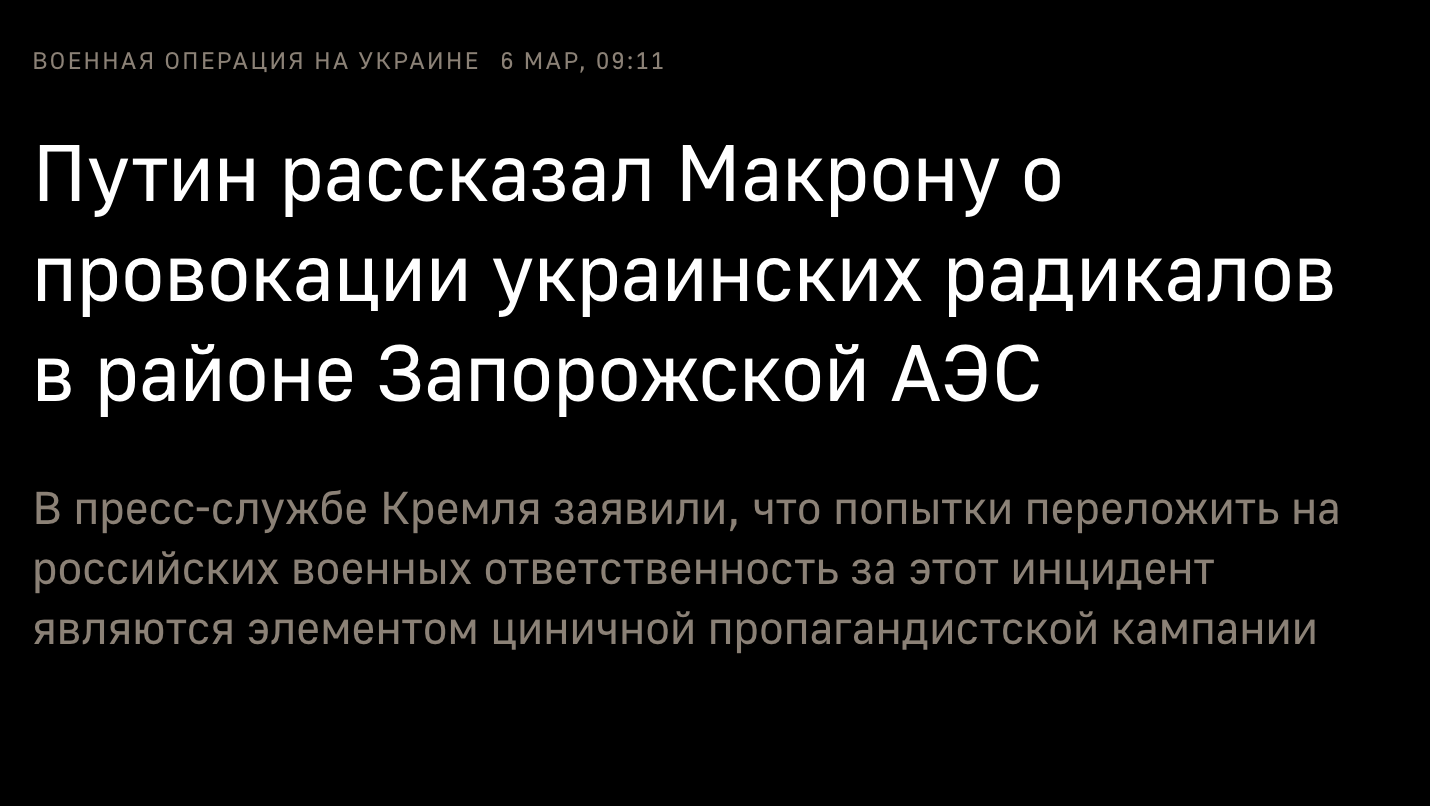 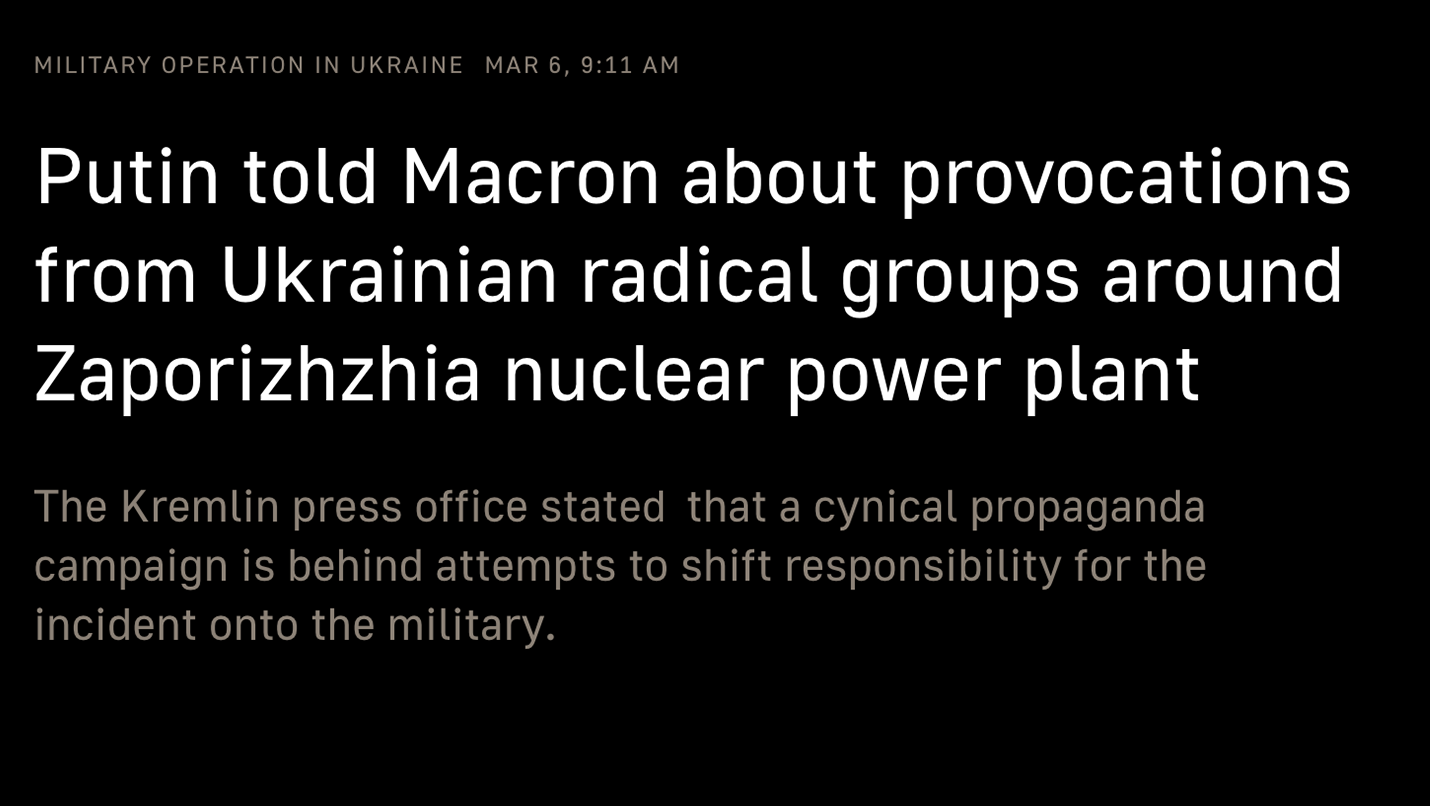 A headline from the Russian state news website Tass.
Translated into English. Tap for the original.

After Russia attacked an area near the nuclear complex in Zaporizhzhia, leading to a fire, President Volodymyr Zelensky of Ukraine called it “nuclear terrorism.”

But according to a Kremlin statement reported in Tass, the military seized the facility to prevent Ukrainians and neo-Nazis from “organizing provocations fraught with catastrophic consequences.” Even though Ukrainians heavily fortified the region against an attack, Russian officials claimed they already had control of the compound before Ukrainians opened fire. They added that Ukrainians set fire to an adjacent building before fleeing, providing no evidence. Western experts said controlling the Zaporizhzhia complex would allow Russia to trigger blackouts or shut down the entire power grid.

The image of Russia as a world protector surfaced again after the country’s officials claimed they discovered evidence that Ukraine was working on a nuclear bomb. According to Russian officials, plans for the bomb were uncovered at the abandoned Chernobyl nuclear power plant.

“It doesn’t even make sense, because if you’re going to develop a nuclear weapon, you don’t do your secret development in a nuclear power plant,” Mr. Vaux said. “But that kind of thing is just being beamed out on Russian state TV.”

After Russia shelled a residential neighborhood, Russians claimed Ukrainians did it.

An attack on Kharkiv, a northeast Ukraine city bordering Russia, provided additional evidence that Russia had indiscriminately bombed residential neighborhoods and killed civilians, according to the Atlantic Council, an American research group. The International Criminal Court opened an investigation into war crimes after the assault.

In one attack that included heavy shelling, 34 civilians were killed and 285 were injured, according to the Ukrainian State Emergency Service.

A post from the Telegram channel for the Russian news site Readovka.
Translated into English. Tap for the original.

But Russians listening to state media or browsing channels on Telegram heard another story: The missiles, those sources claimed, came from Ukrainian territory.

On the ground. As the war in Ukraine enters its third week, the Russian advance appears to have slowed. At the same time, destruction across Ukraine is growing, as Russia increases its targeting of residential areas and civilian infrastructure with long-range missiles.

No agreement. The Foreign Ministers of Ukraine and Russia met in Turkey, for the first time since the start of the war, and failed to stop the fighting. Foreign Minister Sergey V. Lavrov of Russia declared that a cease-fire was never up for discussion.

Chernobyl nuclear facility. The International Atomic Energy Agency said that the defunct power plant had been disconnected from electricity, though there was no need for immediate alarm. A power loss could affect the facility’s ability to keep the water that cools radioactive material circulating and lead to safety issues.

On the diplomatic front. Vice President Kamala Harris visited Poland, where she repeated U.S. pledges to “defend every inch of NATO territory,” while sidestepping questions about Poland’s offer, rejected by the Pentagon, to hand fighter jets over to the United States to transfer to Ukraine.

On a Telegram channel for the Russian news site Readovka, one post described how “Ukrainian missiles” had “arrived from the northwest” — an area controlled by the Ukrainian military.

Russia’s defense department said that it never attacked cities, instead targeting “military infrastructure” with “high-precision weapons,” according to an article in the state-owned news agency RIA Novosti.

A woman who survived a blast at her apartment building became the focus of disinformation efforts after her bloodied and bandaged photograph spread widely through newspapers and Western media.

The woman was a resident of an apartment complex in Chuhuiv, near Kharkiv. The photojournalist Alex Lourie captured her portrait after the attack, and the image was soon featured on the front pages of newspapers around the world. 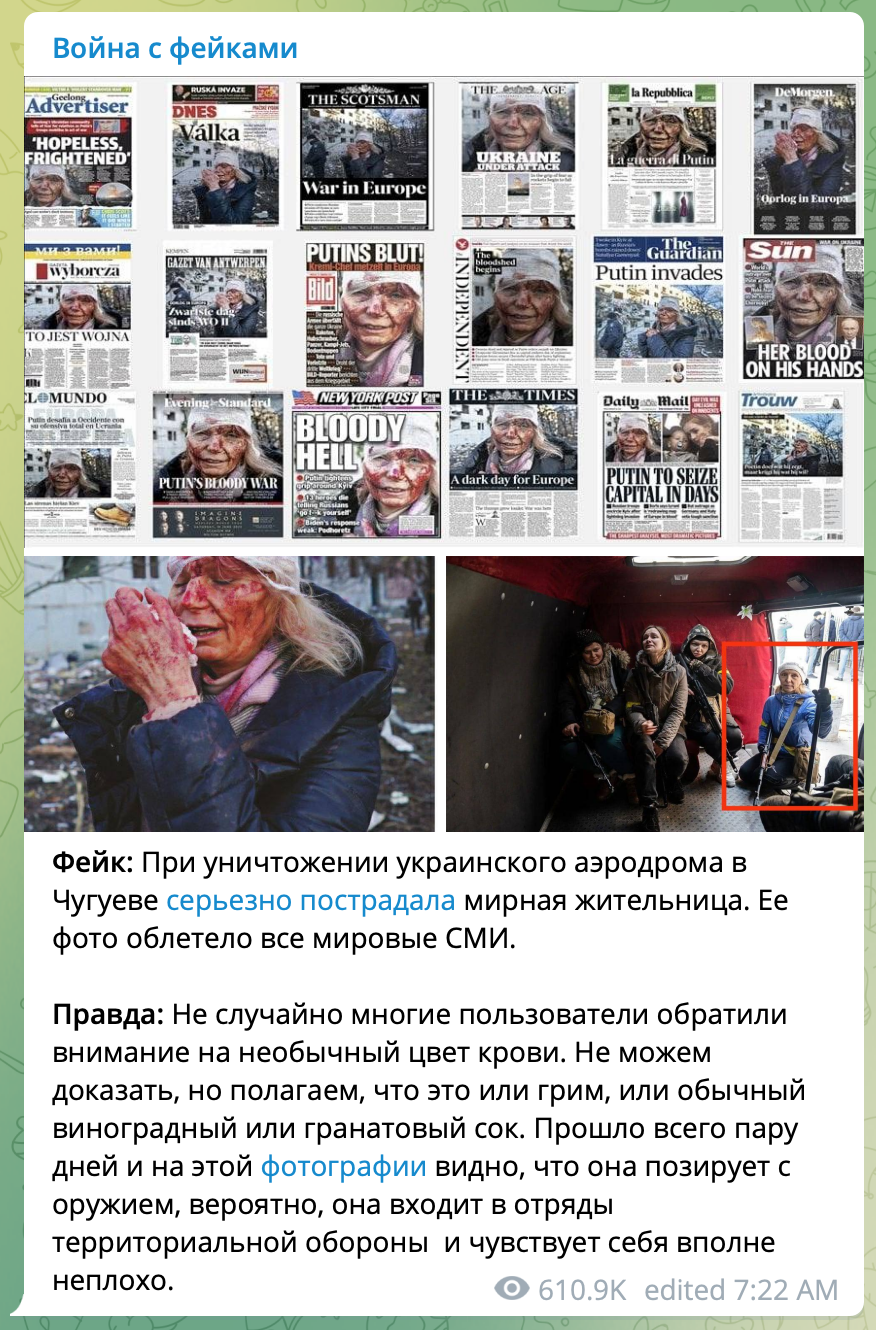 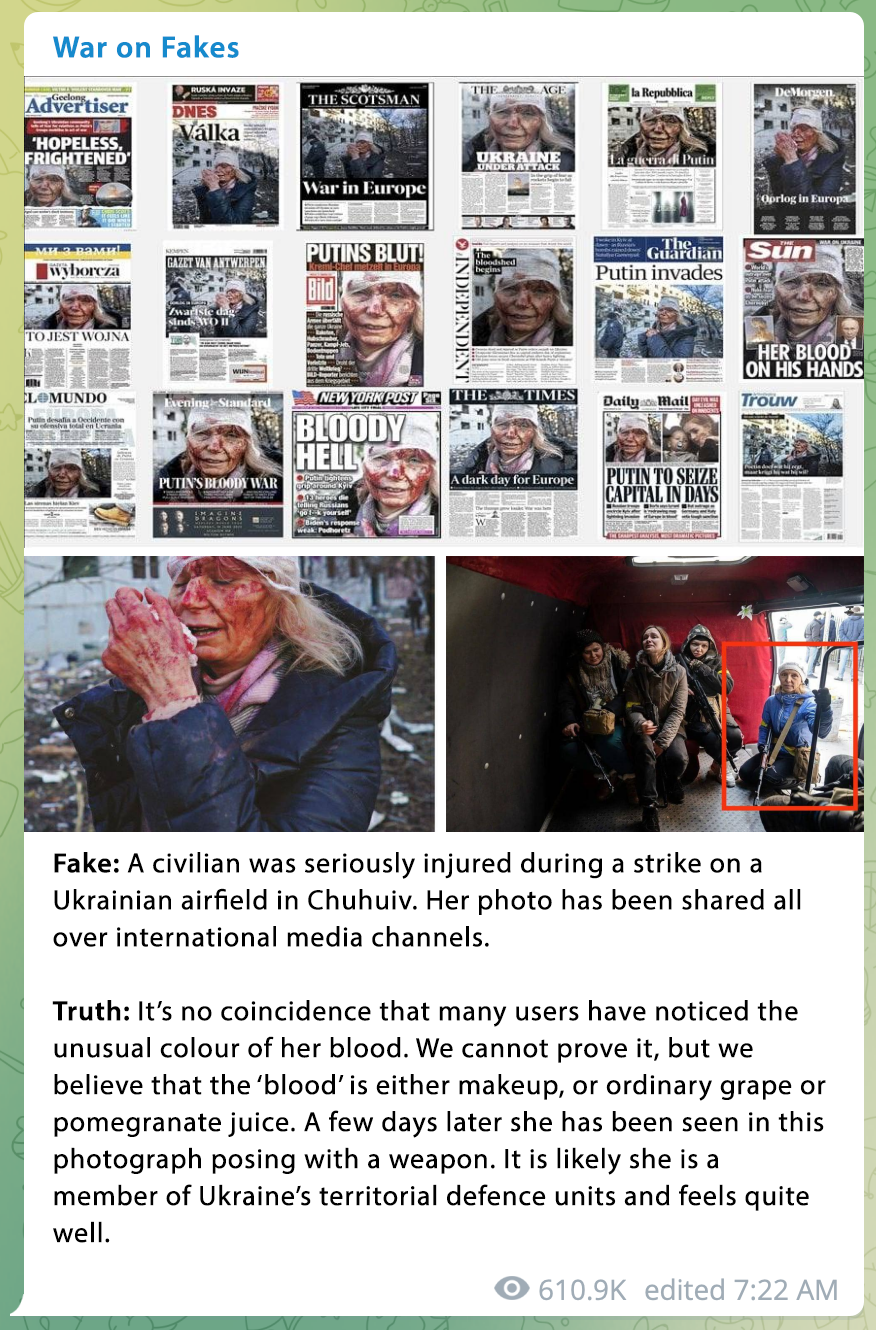 A post from the Telegram channel War on Fakes.
Translated into English. Tap for the original.

But Russian social media channels falsely described her as a member of Ukraine’s psychological operations unit, according to an analysis by the Ukrainian fact-checking website StopFake.

A post by “War on Fakes,” a pro-Russian website and Telegram channel that appeared at the start of the invasion, suggested that the blood could be grape juice and that the woman could be “part of the territorial defense.” As evidence, the post included a shot of another woman bearing some resemblance. That image came from a New York Times photograph, which was taken in Kyiv — a seven-hour drive west of Chuhuiv.

Stuart A. Thompson is a reporter in the technology department covering misinformation and disinformation.