A rash of weekend moves on sanctions, airspace, military aid and more showed that the United States and its allies aren’t afraid to escalate when it comes to helping Ukraine.

People take part in a protest against the Russian invasion of Ukraine outside the White House in Washington on Feb. 27, 2022. | Jose Luis Magana/AP Photo

The gloves are off, at least for now.

After months of making careful, measured moves that failed to persuade Russia to halt plans to invade Ukraine, the United States and its European allies have tossed aside caution in favor of a more ruthless strategy.

Over the weekend, Washington and its partners unveiled a raft of measures — from new weapons transfers to anti-corruption punishments to powerful sanctions on Russian banks to the shutting of the European Union’s airspace to Russian flights — that are sure to make Moscow suffer economically even as it struggles to tame Ukraine militarily. Not only did once-hesitant countries like Germany, shocked by images of a Russian assault on the Ukrainian capital, take the lead on certain fronts, but some of the penalties are directly aimed at Russian leader Vladimir Putin himself.

At times, it was hard to keep up with all the announcements of new anti-Kremlin moves that landed in recent days, the sum of which was arguably historic in size and scope. Even some private companies and international sports organizations took steps to punish Russia. Countries friendly or neutral toward Moscow, meanwhile, largely stayed silent or are offering to help mediate an end to his latest attack on Ukraine. And Putin’s hints that he might be willing to take the nuclear route didn’t prompt any sudden kowtowing from his detractors.

The Russian economy immediately felt the impact, with the country’s currency, the ruble, crashing as Russians rushed to get cash and the country’s stock market was kept shut. U.S. officials on Monday, meanwhile, laid out new details of sanctions imposed on Russia’s financial institutions, including its central bank, finance ministry, National Wealth Fund and Direct Investment Fund. The sanctions will make it much harder for the Russian government to access and move around many of its assets.

“Russia has become a global, economic and financial pariah,” a senior Biden administration official told reporters in a weekend briefing. “This is not where we wanted to be, but this is Putin’s war of choice, and only Putin can decide how much more cost he is willing to bear.”

No one claims that victory is near: Putin is stubborn, and he has few, if any, checks on his power in Russia. His troops have been instructed to capture Kyiv and oust the government of Ukrainian President Volodymyr Zelenskyy. Russian forces still have the upper hand over Ukraine’s troops, despite years of funding and support for the latter from Washington, and neither the United States nor its NATO allies are willing to send their troops to directly fight Russia. Ukraine’s leaders, meanwhile, are calling for more international help. 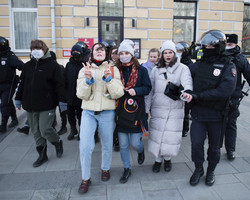 Photos: Protests against the Russian invasion

Still, the growing anti-Putin international bloc’s willingness to escalate — and escalate dramatically — over the weekend drew cheers and sighs of relief from Russia and sanctions hawks, many of whom had long insisted that the United States and Europe should take the measures they announced over the weekend.

“This is the most devastating package of sanctions on Russia that I have ever seen. It demonstrates a sea change in the West’s Russia policy,” said Paul Massaro, a top Capitol Hill staffer and advocate for anti-corruption sanctions included in the weekend roll-out. “I’m thrilled to see these policies implemented. I’m sorry that this is what it took.”

Current and former U.S. officials said the weekend moves came about for an array of reasons. Chief among them were events on the ground: Skeptics, especially in Europe, can no longer ignore nor minimize Putin’s intentions when Russian troops, tanks and missiles are assaulting major Ukrainian cities, including Kyiv.

“It’s the reality of what was happening in Ukraine. It changes the politics of it overnight,” a second senior Biden administration official told POLITICO.

Zelenskyy’s decision to stay in Kyiv and rally his fellow citizens added to the pressure other capitals felt to do something, as did Ukrainian forces unwillingness to fold on the battlefield, officials and analysts said. Among those praising Zelenskyy was Republican Sen. Mitt Romney of Utah, who said the Ukrainian had shown “remarkable courage” and blasted Putin as a “small, evil, feral-eyed man.”

Through social media accounts, viral videos and other means, Zelenskyy, who reportedly rejected a U.S. offer to help him evacuate, has been a relentless voice for Ukrainians, even courting countries such as Azerbaijan and Turkey. Those countries have generally tried to have good relations with Moscow. Over the weekend, Zelenskyy said they’d offered to mediate an end to the fighting.

“Zelenskyy has rallied even traditional partners of Putin to his cause and helped buy political space for the West to take a hatchet to the Russian economy,” said Brian O’Toole, a former Treasury Department sanctions official.

Zelenskyy also said Sunday that Russian and Ukrainian delegations were planning to meet for peace talks along the Ukrainian-Belarusian border, likely on Monday. Belarus has remained in Moscow’s corner amid the fighting. 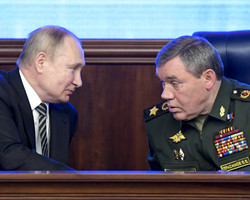 President Joe Biden and his aides’ efforts to rebuild alliances in Europe that had been frayed during the U.S. presidency of Donald Trump also paid off, current and former U.S. officials said.

The Biden team has spent the past several months ramping up its discussions with allies in Europe, such as Germany and France, in an effort to unite the capitals to stand up to Russia. That included sharing significant amounts of U.S. intelligence about Russia’s plans with those countries.

The administration’s diplomatic campaign, as well as threats of U.S. and European sanctions, failed to stop Putin from pursuing a large-scale invasion of Ukraine, which he first entered and took pieces of in 2014. Now, the focus is less on deterring Russia and more on raising the costs to the Kremlin.

Some of the most dramatic announcements of recent days came from Germany.

Last week, as Putin made moves toward an attack on Ukraine by recognizing the independence of two breakaway regions, German Chancellor Olaf Scholz said his government was halting its controversial Nord Stream 2 energy pipeline project with Moscow. Over the weekend, Scholz went even further.

On Saturday, his government announced it would send anti-tank rockets and Stinger missiles to Ukraine, a major shift from German policies not to send weapons to conflict zones. On Sunday, Scholz said Germany would dramatically increase its defense spending, including a one-time 100 billion euro infusion, another huge policy shift.

Germany also will be a key player in other moves announced this weekend by the United States and its allies. Chief among them: cutting off key Russian banks from SWIFT, a critical international banking information network; sanctioning the Russian Central Bank to prevent it from being able to use its reserves to support the Russian ruble currency; and dramatically increasing efforts to hunt down and freeze the assets of sanctioned Russian companies and oligarchs.

“We’ll go after their yachts, their luxury apartments, their money, and their ability to send their kids to fancy colleges in the West,” the first senior administration official said.

The transatlantic sanctions efforts will target Putin’s personal assets as well as those of people close to him who have helped him hide what are believed to be billions of dollars in wealth, U.S. and European officials said.

Amid the international moves against him, Putin announced he was putting Russia’s nuclear forces on high alert. But while U.S. officials publicly said the step was an unnecessary provocation, there was less concern privately that the Russian leader was making the move for anything other than messaging or symbolic reasons.

Ukrainian leaders have been heartened by the array of sanctions efforts over the past week, including Thursday, when the U.S. and others announced a large slate as the Russian incursion began in earnest. But the Ukrainians nonetheless are calling on friends in Washington and beyond to do more.

“We insist on a full embargo for Russian oil and gas,” Ukrainian Foreign Minister Dmytro Kuleba tweeted Sunday. “Buying them now means paying for the murder of Ukrainian men, women and children.”

It’s not clear this is a lever that European countries or the United States are willing to pull anytime soon. The oil and gas sector is a huge part of the Russian economy, and Russia also is a major source of energy for Europe. Imposing sanctions on that sector could badly affect gas and related prices in Europe and, ultimately, the United States.

U.S. officials said Sunday that they’re not ruling out any sanctions options, and Biden has warned Americans that even the steps taken so far against Russia could affect their wallets at some point.

What U.S. officials are ruling out for now are calls to impose a no-fly zone over Ukraine. Such an effort could bring U.S. and its NATO allies in direct conflict with Russia, which transatlantic leaders are keen to avoid. Biden months ago declared he would not send U.S. troops to fight in Ukraine against Russia, although he’s signed off on beefing up shipments of weapons and military equipment to Kyiv.

As the fury over Russia’s Ukraine invasion has grown in recent days, countries not in the European Union or even in Europe joined the punishment campaign.

Norway said its sovereign wealth fund will divest its Russian assets. Japan, a member of the G-7, has announced a raft of sanctions on Moscow in recent days. Even famously neutral Switzerland — long a favorite place for corrupt elites to stash their funds — suggested it may go along with sanctions.

Some private companies and international groups also are taking steps to punish the Kremlin. British energy giant BP, for instance, said it was abandoning its 20 percent stake in Rosneft, a Russian state-controlled oil producer. The move could cost BP billions of dollars. The International Judo Federation announced it was suspending Putin as an honorary president.

Because it has veto power as a permanent member of the U.N. Security Council, Russia last week was able to block a resolution demanding it end its aggression against Ukraine. But countries including China, India and the United Arab Emirates — which have sought good ties with Moscow — chose to abstain rather than voting against the resolution.

Russia also was unable to stop the scheduling of an emergency session of the U.N. General Assembly on Monday. That will offer a high-profile forum for more of the world’s countries to condemn Russia’s invasion of Ukraine.