De-globalization looks as though it’s happening. Calls for yet more sanctions on Russia after the horrifying images of dead bodies strewn across Ukrainian streets seem now to have every chance of success, with European nations possibly even prepared to inflict upon themselves the pain of an embargo on Russian energy imports. As the pandemic continues to disrupt supply chains, and geopolitical tensions between the U.S. and China haven’t gone away, the need to shorten the flow of goods, services, components and raw materials and bring production home becomes acute.

Globalization didn’t benefit everyone, and de-globalization (or “slowbalization”) needn’t hurt everyone. Some countries should benefit. But positioning to do so will take some effort.

Perhaps the most interesting case is Mexico — where I lived for four years and feel able to comment. The country had a series of dramatic crises through the 1970s and 1980s, but has managed to survive without any financial implosion of its own making since the Tequila Crisis of 1994, which led to about half of banking assets being written off.

But while Mexico has worked out how to maintain stability (unlike other Latin American powers such as Brazil and Argentina), it hasn’t worked out how to grow. Four decades ago, Mexican gross domestic product per capita was comfortably higher than South Korea’s and many multiples of China’s. Now, China has just overtaken Mexico, while South Korea’s wealth per person is almost four times greater: After the 1994 crisis, Mexico aimed for economic orthodoxy, successfully squeezing out inflation, keeping budget deficits under control, and cannily playing international markets to get preferential funding. The country also sought to open up to the world through what was then Nafta (the North American Free Trade Agreement.) The problem was that it came just in time to be sideswiped by the rise of China, and then that nation’s accession to the World Trade Organization in 2001. A thriving industry of maquiladoras — assembly plants on the border that would take parts from the U.S., put them together into final products and send them back — helped spur growth, only to be priced out of the market by far cheaper Chinese labor. This chart from the Peterson Institute of International Economics tells the story: President Donald Trump’s tariff war with China offered the maquiladoras a chance to regain some share. This chart from the Peterson Institute, based on U.S. Census Bureau data, shows that the tariffs were a boon for Mexico, which benefited far more than countries with greater transport costs to the U.S. However, Mexico continued to lose ground to Vietnam and the rest of the world in products that the U.S. hadn’t protected with tariffs: 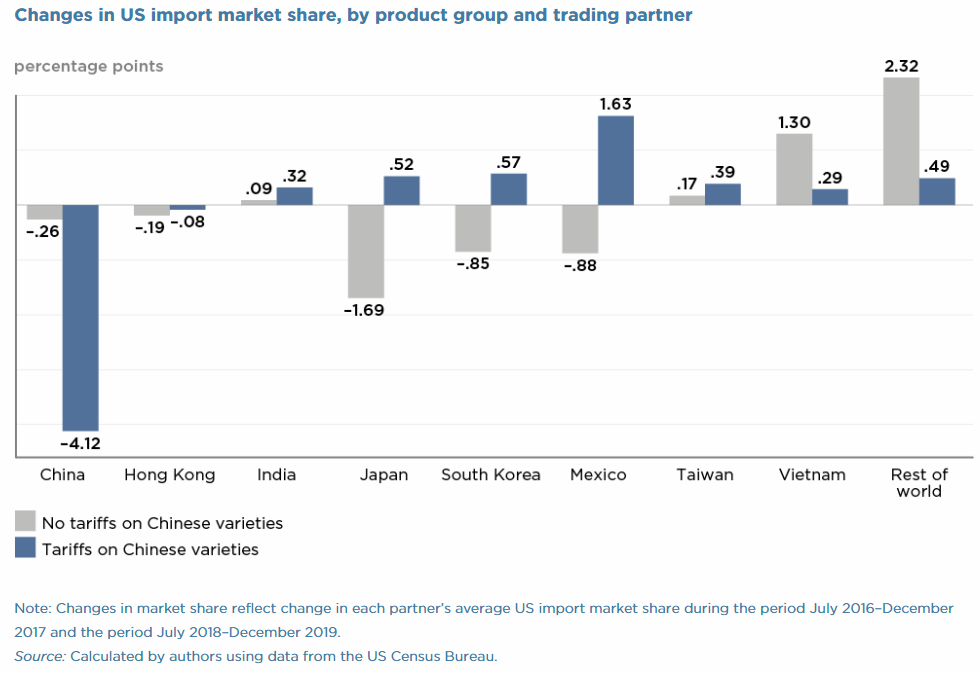 Now, opportunity should knock once again. “Near-shoring” has become an economic and political imperative. American companies, and even their Chinese competitors, are looking to the cheap and well-connected labor available at the Mexican border. Mexico’s stock market is enjoying a rally that has seen it reach almost a five-year high, in terms of dollars. Following serious damage from Trump’s election in 2016, then the election of the left-wing Andres Manuel Lopez Obrador as Mexico’s president two years later, and then the pandemic, the value of Corporate Mexico has recovered. As so often happens, reflexive panic at the success of a populist politician created a buying opportunity: 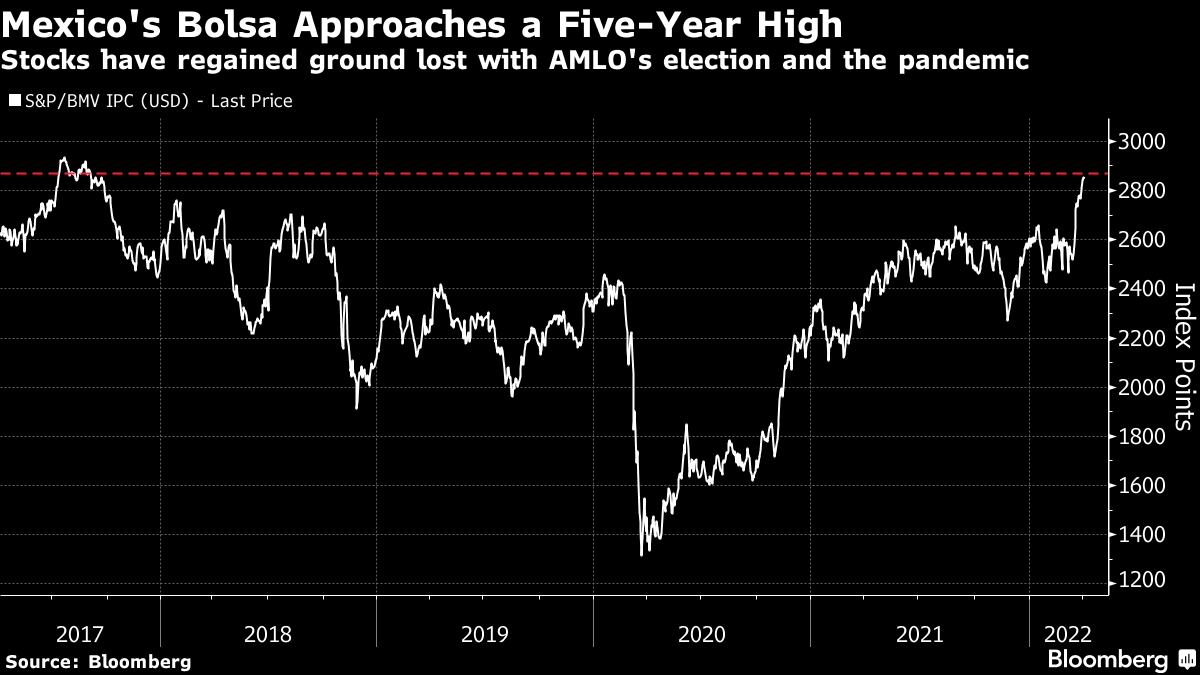 To ram home just how great the opportunity for Mexico is, Tom Miller of Gavekal Research contributed a long piece of reportage on the maquiladora economy. Of the Ukraine conflict and the reaction to it, he says:

This presents another opening for Mexico. Chinese goods exports exceeded $500bn to the U.S. last year, much larger than Mexico’s $385bn. But the gap has been shrinking in recent years, both as Mexico’s exports have grown and as manufacturers have shifted some global production away from China. One in five members of the American Chamber of Commerce in Shanghai say they redirected investment from China to other countries in 2021. Of these, 35% chose Mexico, led by manufacturers of industrial parts, non-consumer electronics and auto components…

More than 5 million trucks rumbled through Laredo in 2021, carrying $250 billion of goods. It costs a little over $600 to truck a forty-foot container from Monterrey to the border, and just two days from there to reach New York. By contrast, shipping a container from Shanghai to LA takes up to a month and costs $10,000 at the current spot rate.

Can Mexico take the opportunity this time? It looks worryingly as though it might not. Since Lopez Obrador came to power, Mexico has increasingly drawn in upon itself. Carlos Capistran of BofA Securities points out that both its financial account and current account have tightened to the point where they are almost exactly in balance. He said:

With nearly zero CA and FA balances, Mexico’s balance of payments resembles that of an autarky (an economy that operates self-sufficiently.) The reversion in the CA started more than a year before the pandemic, and it is correlated with the beginning of the current administration (2018.) It likely reflects lack of investment opportunities. The reduction in FA inflows, driven by a reversion in portfolio investment, did not trigger an FX depreciation as there was no CA deficit to finance: Mexico converged to an autarky without a big fuss, but with a large cost in terms of growth. We expect Mexico to remain in this state for the rest of the administration.

This chart illustrates what is going on: 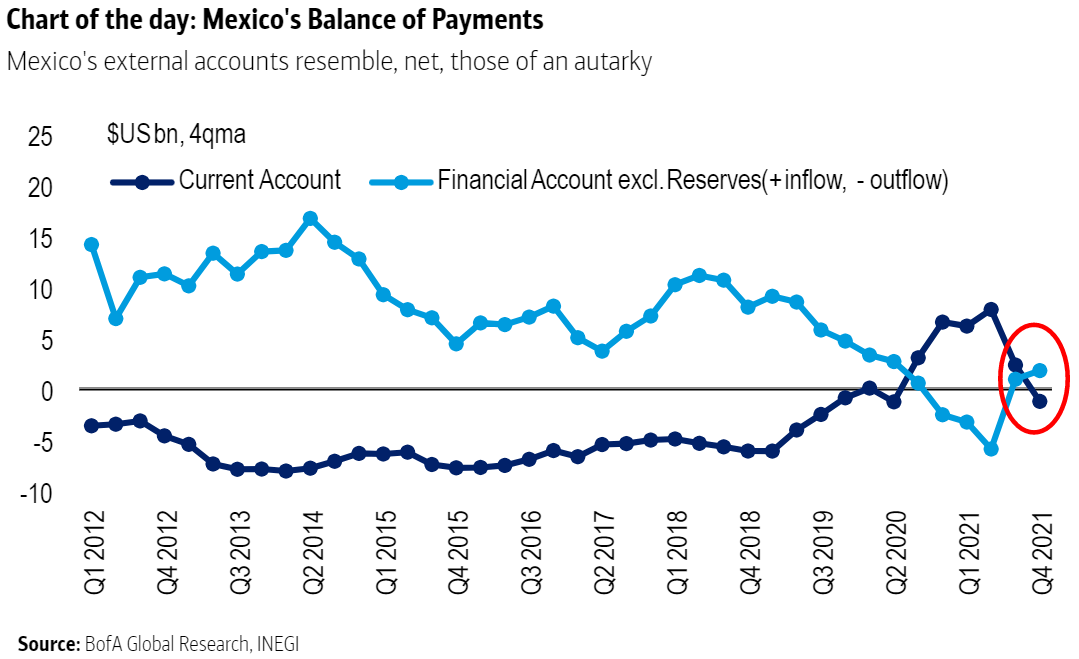 Lopez Obrador is famously frugal. His insistence on driving himself to work in a small sedan, and awarding himself a pay cut while he was mayor of Mexico City, were central to the populist appeal that won him the presidency. Fears that he would indulge in a splurge of irresponsible fiscal spending proved to be completely wide of the mark, as he has continued with his own version of austerity. Even though his habit of speaking off the cuff in long, Trump-like tangents can discombobulate markets, he hasn’t driven the country into crisis.

The painful irony is that the timing is wrong again. As Mexico’s opening into globalization was overshadowed by China’s, Lopez Obrador is creating an autarky when at last Mexico has another chance to benefit from the global economy. Under the current administration, foreign investors aren’t attracted to Mexico. Mariana Campero shows in the Peterson Institute survey that private flows of investment into Mexico were dwindling even before Lopez Obrador won election and made his massively unpopular decision to cancel Mexico City’s new airport in October 2018. Since then, the country has seen a consistent decline in both private and public investment: 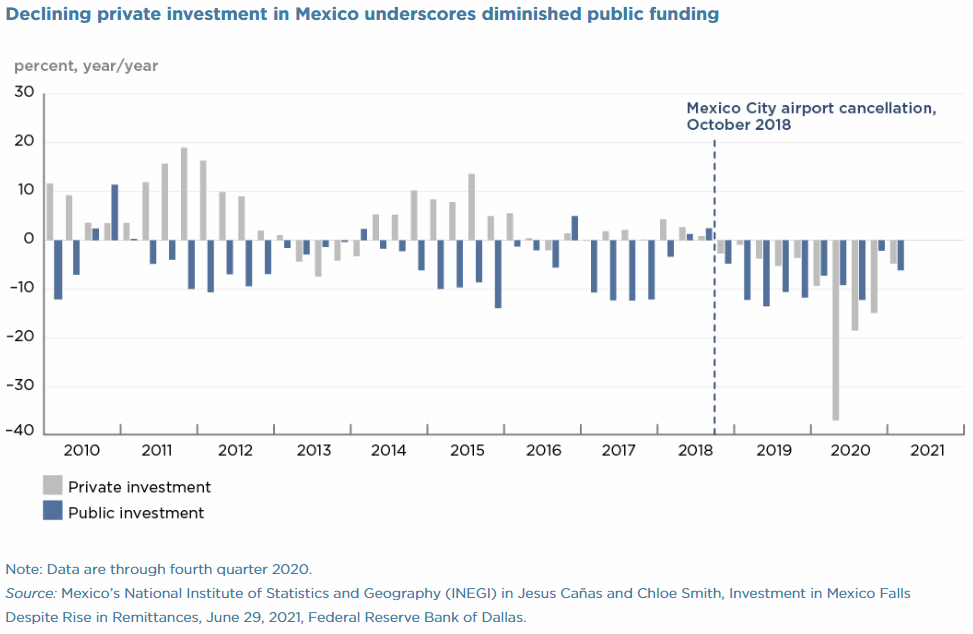 Most damagingly, Mexico can no longer bank on an influx of investment via its oil exports. Since the 1930s, when the post-revolutionary government expropriated foreign producers, its petroleum industry has been dominated by the state-owned monopoly Pemex, and the constitution has made it hard to attract international investment. After years of under-funding from trying to go it alone, Mexico’s oil exports have now dropped below its imports. Unlike other countries in Latin America, it won’t necessarily benefit from higher commodity prices. This chart is from Capistran of BofA Securities: The pattern for the rest of the region is different. Countries like Brazil or Colombia should benefit from higher commodity prices. But the current rally has been driven by de-globalization and constriction of supply, rather than the wave at the beginning of this century that stemmed from globalization and increasing demand. So perhaps it isn’t surprising that Latin American stocks are benefiting far less this time around: 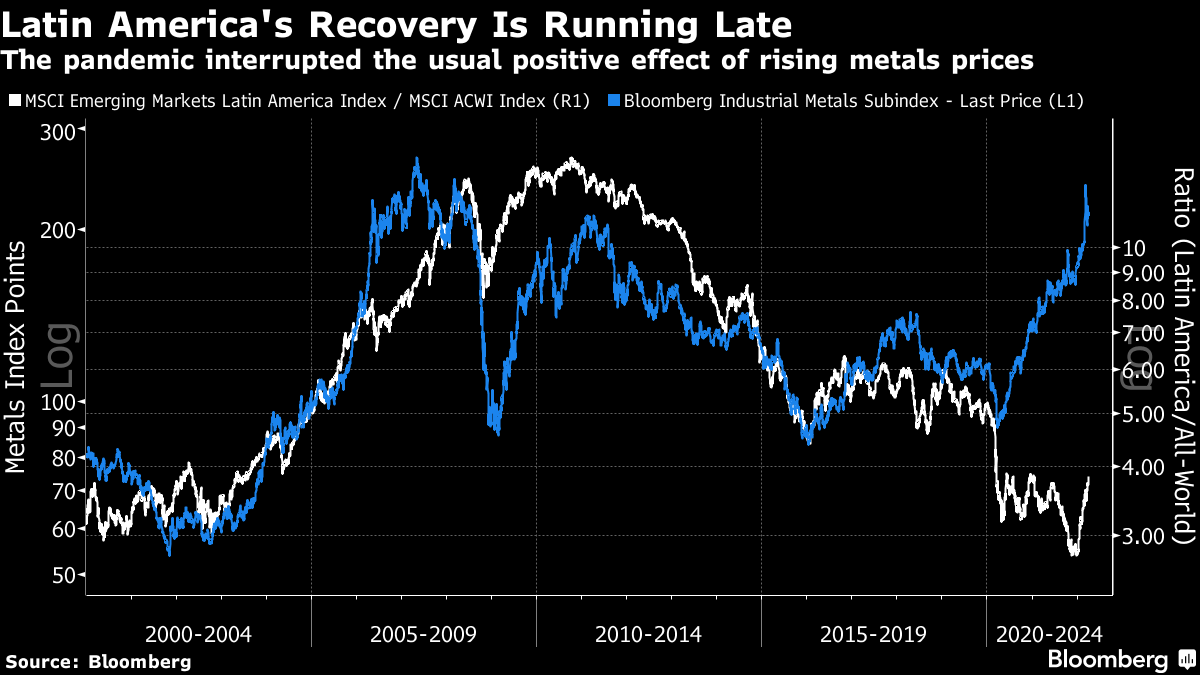 This counteracts the cash flowing into Mexico via remittances from Mexican laborers, the great majority of them in the U.S. It is more than 20 years since Mexico tried to reach a comprehensive settlement with the U.S. on migrant worker visas. It never happens, and remittances stalled for the best part of a decade after the Global Financial Crisis. Now, with a tight labor market in the U.S., they’re back on an upward swing: The greatest issue continues to be one of rule of law. Mexico has had a reasonably well-functioning democracy for two decades now. Its last three presidents have come from different parties. But it hasn’t managed to enact the kind of reforms that might allow the economy to flourish, and encourage the investment that it needs. The hope was that joining Nafta would force such changes in culture. But, where they have happened at all, changes have been painfully slow. Luis de la Calle, who as a diplomat was a key member of the Mexican team that negotiated Nafta in the early 1990s, prescribes Mexico’s failure to grow as follows:

Only growth and wealth creation overcome poverty. But it is ideas and innovation, and not capital accumulation or long work hours, that make growth truly possible. And ideas flourish in an environment of freedom, equality, and respect for others: precisely the competitive advantage of liberal democracies with respect to China. In the end, Mexico’s contribution to itself and to North American competitiveness hinges upon establishing such an environment.

For Mexico, read many other countries in the emerging world. The losers from globalization now have a chance to win from de-globalization. But it’s possible they’ve adapted themselves too well to survival on their own. Mexico famously never misses an opportunity to miss an opportunity. Will it do so again, and will others follow?