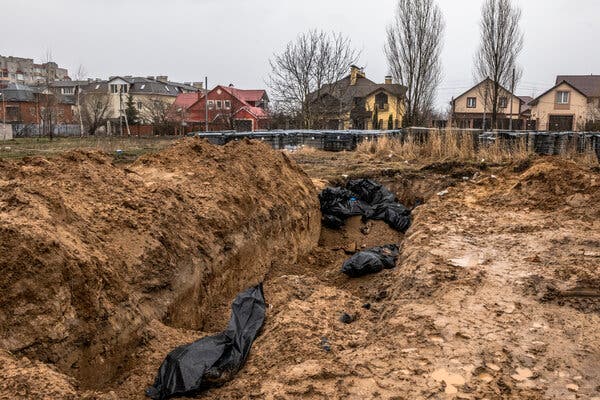 BUCHA, Ukraine — Growing evidence of atrocities against civilians has brought home the horrific toll of the war in Ukraine, prompting world leaders on Sunday to threaten even harsher sanctions, including a lockout of Russia’s vital gas industry, a step some had been loath to take.

In Bucha, a newly liberated suburb northwest of the capital, residents were still finding bodies in yards and roadways days after Russian troops withdrew. A man in a bright blue fleece lay hunched over the steering wheel of a crushed car at an intersection in the center of town. Another man lay on his back beside the road, a large bullet hole in the back of his head and his green bicycle toppled beside him.

But it was the discovery of corpses with their wrists bound, images of which quickly proliferated online, that sparked the most international outrage.

“The Russian authorities will have to answer for these crimes,” said France’s president, Emmanuel Macron. Poland’s prime minister, Mateusz Morawiecki, called the actions of the Russian army in Bucha and other towns around Kyiv “acts of genocide.” And António Guterres, the United Nations secretary general, expressing “shock” over the images of dead civilians, said: “It is essential that an independent investigation leads to effective accountability.”

Even as Moscow’s troops pulled away from Kyiv, they continued to batter Ukraine’s southern coastline with a series of strikes on infrastructure Sunday, part of an apparent repositioning of Russian forces to expand territory they have claimed in the south.

Missiles struck the Black Sea port cities of Odesa and Mykolaiv, according to Ukrainian officials, and Ukraine’s air defense southern command said it had intercepted two Russian sea-based cruise missiles. Russia’s Defense Ministry confirmed the strikes, saying it had destroyed an oil refinery and three oil depots around Odesa that “were used to resupply Ukrainian military units” near Mykolaiv.

But on Sunday, the world’s attention was focused more on where Russian forces had been than where they were now, with Bucha at the forefront.

As Ukrainian forces swept into the suburb, civilians emerged from basement shelters to a landscape dotted with bodies and the husks of destroyed tanks.

The dead were so numerous that local officials resorted to digging a mass grave outside a church, where a coroner, Serhiy Kaplishny, said about 40 bodies had been deposited during the occupation. In an interview, Mr. Kaplishny said his team had collected more than 100 bodies during and after the fighting, including those of more than a dozen men whose hands had been tied and who had been shot in the head.

Journalists from The New York Times, The Associated Press and other international news outlets arriving in Bucha and nearby towns have also filmed and photographed bodies in civilian clothes scattered in the streets and at least nine lying together in a yard. In several cases, hands were bound behind the back.

“We are being destroyed and exterminated, and this is happening in the Europe of the 21st century,” Ukraine’s president, Volodymyr Zelensky, said in an interview on CBS’s “Face the Nation,”

Russia’s Defense Ministry on Sunday rejected all accusations that its troops had committed atrocities in Bucha, saying that “not a single” civilian had been injured while the town was under Russian control. It said pictures and video footage from the area had been “staged by the Ukrainian government.”

But as evidence of the apparent massacre of civilians mounted, leaders across the world said Moscow was to blame for the violence and should be held accountable.

Prime Minister Boris Johnson of Britain condemned “Russia’s despicable attacks against innocent civilians in Irpin and Bucha,” and even Yair Lapid, the foreign minister of Israel, which has been wary of antagonizing Moscow, said it was “impossible to remain indifferent in the face of the horrific images from the city of Bucha.”

“Intentionally harming a civilian population is a war crime and I strongly condemn it,” Mr. Lapid said.

Secretary of State Antony J. Blinken, in an interview on CNN, said the killings should not go unpunished. “We’ve said before Russia’s aggression that we thought it was likely that they would commit atrocities,” Mr. Blinken said, adding: “We can’t become numb to this. We can’t normalize this.”

Outrage over the civilian deaths could move the needle for the European Union, which has so far rebuffed mounting calls from Ukraine, and by President Biden, to impose sanctions on Russian oil and gas, citing its dependency on Russian fuels.

In what would mark a significant shift in her country’s position, Germany’s defense minister, Christine Lambrecht, said that in light of the Bucha atrocities, the bloc should consider banning Russian gas imports. Charles Michel, the president of the European Council, said on Twitter that more European Union sanctions against Russia “are on their way.”

On Sunday, a leading human rights group said it had documented “apparent war crimes” against Ukrainian civilians by Russian forces that had occupied Chernihiv, Kharkiv and Kyiv. Citing interviews with eyewitnesses, victims and local residents of Russia-occupied territories, the group, Human Rights Watch, documented a case of a woman who was repeatedly raped, as well as two summary killings and other episodes of violence against civilians.

The report painted a grueling picture of brutality in Bucha even before the accounts that emerged from there after Russian forces withdrew.

One eyewitness cited in the report described an execution in early March, in which Russian soldiers forced five men to kneel on a roadside and pull their shirts over their heads before shooting one of them in the head.

“The cases that we documented are corroborated by these recent allegations,” said Yulia Gorbunova, the author of the Human Rights Watch report, referring to the recent reports circulating from Bucha. “What is emerging now, if confirmed, is quite horrendous and gives an indication of the scale of these atrocities,” she said.

War crimes cases can be brought before the International Criminal Court in The Hague, but successful prosecution is a steep climb, experts say.

“It would likely be difficult to prove in court,’’ said David Scheffer, an international law expert. “The circumstances are unknown. Who executed them. Who bound their hands. This would require a very difficult and detailed investigation.’’

“This is very different from a military strike on a city,’’ he said.

Accusations can also be brought before the International Court of Justice, but the United Nations Security Council would be responsible for enforcing any ruling against Russia; as one of five permanent members of the Security Council, Russia would have veto power over any decision.

The Russian government has consistently denied claims that its forces have committed war crimes in Ukraine, even as reports emerged of mass casualties from the bombing of a maternity ward and theater in Mariupol. In occupied Bucha, the Russian defense ministry said in a statement residents “could freely move around the town” and were allowed to leave.

“This is another provocation,” the ministry said of the new reports of atrocities.

But the accounts from Ukraine and the grisly images may spur additional military aid to Ukraine, aside from more punishment on Russia.

In the besieged port city of Mariupol, residents were still awaiting the arrival of an aid convoy that has been trying to reach them since Friday, the International Committee of the Red Cross said Sunday. Late Thursday, Russia announced a cease-fire to allow for evacuations out of Mariupol, but humanitarian efforts to reach the city have stalled repeatedly.