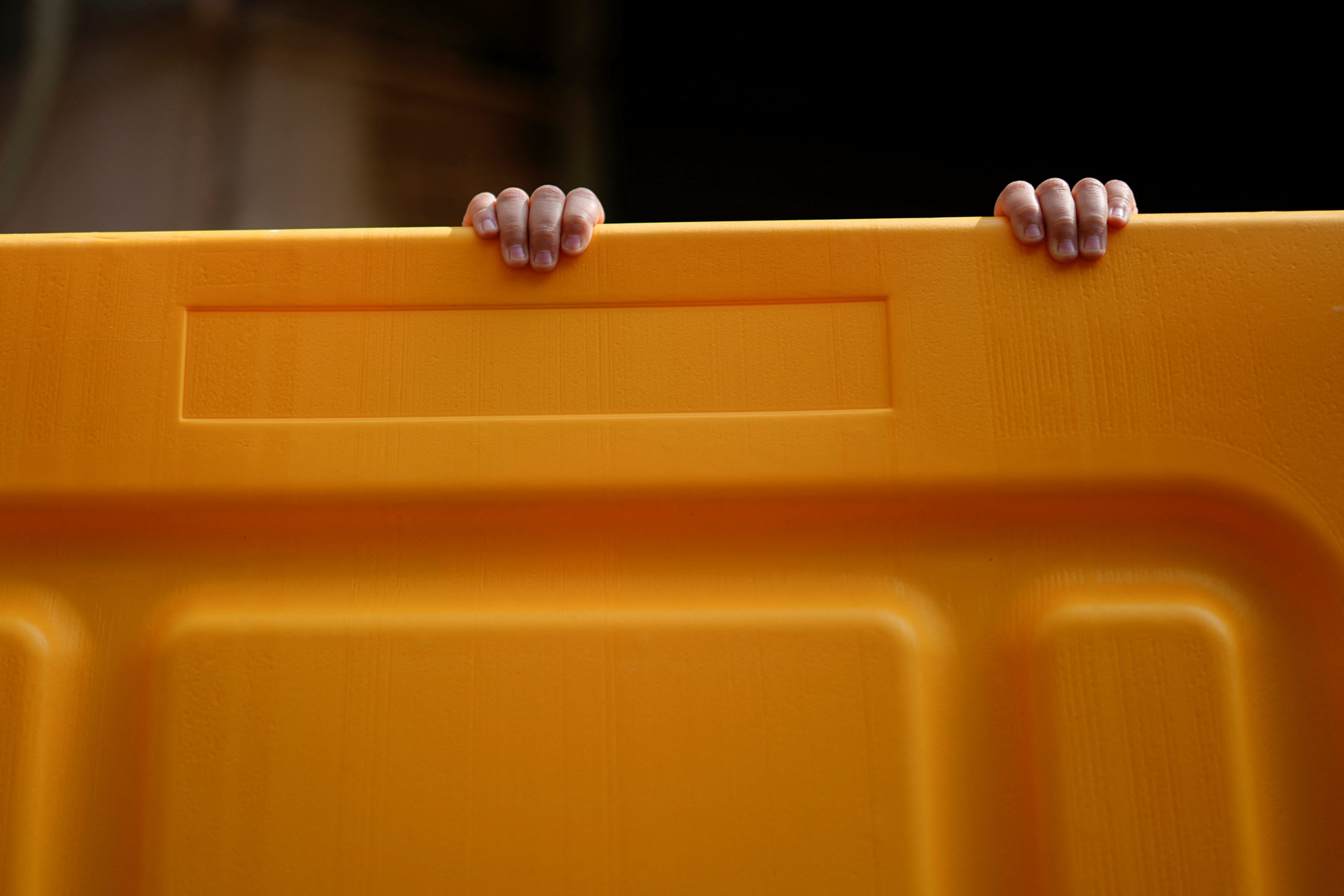 A child's hands are seen on a barrier at an area under lockdown amid the coronavirus disease (COVID-19) pandemic, in Shanghai, China March 26, 2022. Picture taken March 26, 2022. REUTERS/Aly Song

SHANGHAI, April 2 (Reuters) - Esther Zhao thought she was doing the right thing when she brought her 2-1/2-year-old daughter to a Shanghai hospital with a fever on March 26.

Three days later, Zhao was begging health authorities not to separate them after she and the little girl both tested positive for COVID-19, saying her daughter was too young to be taken away to a quarantine centre for children.

Doctors then threatened Zhao that her daughter would be left at the hospital, while she was sent to the centre, if she did not agree to transfer the girl to the Shanghai Public Health Clinical Center in the city's Jinshan district.

Since her daughter was sent to the centre Zhao has had only one brief message that she was fine, sent through a group chat with doctors, despite repeated pleas for information from Zhao and her husband, who is in a separate quarantine site after also testing positive.

"There have been no photos at all... I'm so anxious, I have no idea what situation my daughter is in," she said on Saturday through tears, still stuck at the hospital she went to last week. "The doctor said Shanghai rules is that children must be sent to designated points, adults to quarantine centres and you're not allowed to accompany the children."

Zhao is panicking even more after images of crying children at a Shanghai health facility went viral in China. The anonymous poster said these were children who had tested positive for COVID-19 and been separated from their parents at the Jinshan centre.

The photos and videos posted on China's Weibo and Douyin social media platforms showed wailing babies kept three to a cot. In one video, a groaning toddler crawls out of a room with four child-sized beds pushed against the wall. While a few adults can be seen in the videos, they are outnumbered by the number of children.

Reuters could not immediately verify the images, but a source familiar with the facility confirmed they were taken at the Jinshan facility.

The Shanghai Public Health Clinical Center said, however, that the photos and videos circulating on internet were not of a "Jinshan infant quarantine facility" but were scenes taken when the hospital was moving its paediatric ward to another building to cope with a rising number of COVID paediatric patients.

This was done to "improve the hospital environment", it said on its official WeChat account on Saturday, adding that it had organised for more pediatric workers and would strengthen communication with the children's parents.

"Paediatric patients admitted to our hospital... are guaranteed medical treatment and their daily needs taken care of," it said.

Later on Saturday the Shanghai rumour buster WeChat account, which is backed by China's cyberspace watchdog, published four photos that it said showed the children's current situation at the Jinshan centre.

One of the photos showed young children sitting in and standing around beds that were arranged neatly in two rows, though no adults were pictured. In another photo, a hazmat-suited person attends to a baby lying in a cot. Only one other adult, also in a hazmat suit, can be seen in the two other photos.

The Shanghai government referred Reuters to the hospital's statement and declined to comment further.

A Shanghai health official said last week that hospitals that were treating COVID-positive children maintained online communications with their parents.

By Saturday, the original post had been deleted from Weibo, but thousands of people continued to comment and repost the images. "This is horrific," said one. "How could the government come up with such a plan?," said another.

In some cases children as young as 3 months old are being separated from their breastfeeding mothers, according to posts in a quarantine hospital WeChat group shared with Reuters. In one room described in a post, there are eight children without an adult.

In another case, more than 20 children from a Shanghai kindergarten aged 5 to 6 were sent to a quarantine centre without their parents, a source familiar with the situation said.

Since Shanghai's latest outbreak began about a month ago, authorities have locked down its 26 million people in a two-stage process that began on Monday.

While the number of cases in Shanghai is small by global standards, Chinese authorities have vowed to stick with "dynamic clearance", aiming to test for, trace and centrally quarantine all positive cases.

The U.S., French and Italian foreign consulates have warned their citizens in Shanghai that family separations could happen as Chinese authorities executed COVID curbs, according to notices seen by Reuters.