The warrant that authorized the F.B.I. to search former President Donald J. Trump’s Florida residence on Monday listed three criminal laws as the basis of its investigation, offering a glimpse of an inquiry into his possession of government documents.

The search warrant, which was unsealed and made public on Friday in response to a motion by the Justice Department, showed that the magistrate judge who issued it found that there was probable cause to believe the F.B.I. would uncover evidence of all three crimes.

Mr. Trump, who had declined to make the documents public himself but did not object to their release, said that the materials listed in an inventory of items seized from his home had all been declassified. The inventory included multiple caches of documents that the F.B.I. described as top secret along with other government files.

Even if it is true that Mr. Trump deemed the files declassified before the end of his presidency, however, none of the three crimes depends on whether the documents are classified. 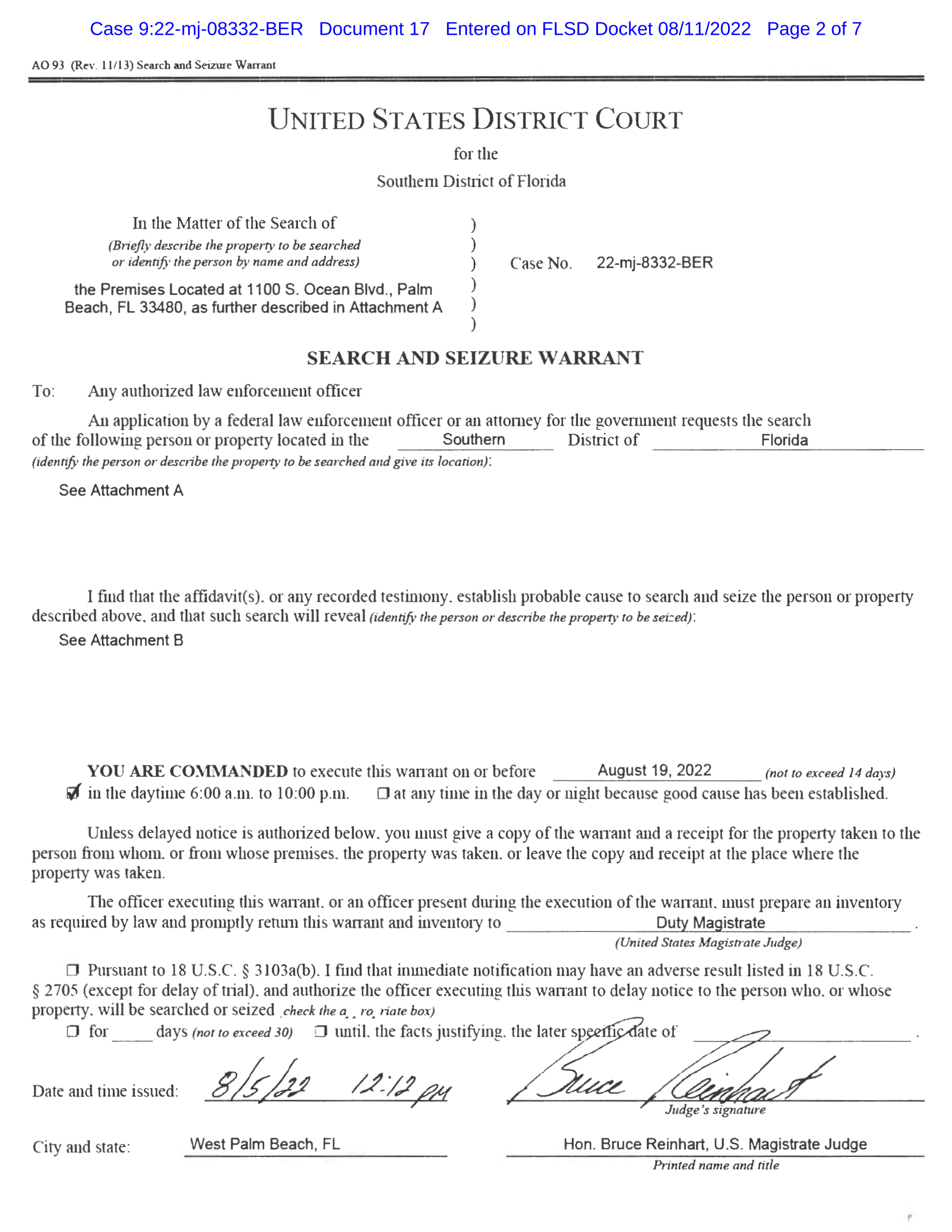 A federal judge on Friday unsealed the search warrant for former President Donald J. Trump’s Mar-a-Lago residence in Palm Beach, Fla., as well as a list of items removed from the property when federal agents executed the warrant this week.

Numerous inquiries. Since Donald J. Trump left office, the former president has been facing several different civil and criminal investigations across the country into his business dealings and political activities. Here is a look at some notable cases:

Classified documents inquiry. The F.B.I. search of Mr. Trump’s Florida home appears to be related to a Justice Department investigation into his handling of classified materials. The inquiry is focused on the discovery by the National Archives that Mr. Trump had taken 15 boxes of documents from the White House to Mar-a-Lago when he left office.

Jan. 6 investigations. In a series of public hearings, the House select committee investigating the Jan. 6 attack laid out a powerful account of Mr. Trump’s efforts to overturn the 2020 election. This evidence could allow federal prosecutors, who are conducting a parallel criminal investigation, to indict Mr. Trump.

Georgia election interference case. Mr. Trump himself is under scrutiny in Georgia, where the district attorney of Fulton County has been investigating whether he and others criminally interfered with the 2020 election in the state. This case could pose the most immediate legal peril for the former president and his associates.

Manhattan criminal case. The Manhattan district attorney’s office has been investigating whether Mr. Trump or his family business, the Trump Organization, intentionally submitted false property values to potential lenders. But the inquiry faded from view after signs emerged that Mr. Trump will not be indicted.

New York State civil inquiry. The New York attorney general’s office is conducting its own civil inquiry into some of the same conduct as the Manhattan district attorney’s investigation. The case is focused on whether Mr. Trump’s statements about the value of his assets were part of a pattern of fraud or were simply Trumpian showmanship.

The first law, Section 793 of Title 18 of the U.S. Code, is better known as the Espionage Act. It criminalizes the unauthorized retention or disclosure of information related to national defense that could be used to harm the United States or aid a foreign adversary. Each offense can carry a penalty of up to 10 years in prison.

Despite its name, the Espionage Act is not limited to instances of spying for a foreign power and is written in a way that broadly covers mishandling of security-related secrets. The government has frequently used it to prosecute officials who have leaked information to the news media for the purpose of whistle-blowing or otherwise informing the public, for example.

Importantly, Congress enacted the Espionage Act in 1917, during World War I — decades before President Harry S. Truman issued an executive order that created the modern classification system, under which documents can be deemed confidential, secret or top secret. The president is the ultimate arbiter of whether any of those classifications applies — or should be lifted.

As a result, while these classifications — especially top secret ones — can be good indicators that a document probably meets the standard of being “national defense information” covered by the Espionage Act, charges under that law can be brought against someone who hoarded national security secrets even if they were not deemed classified.

The list of items that the warrant authorized the F.B.I. to seize captured this nuance. It said agents could take “documents with classification markings,” along with anything else in the boxes or containers where they found such files, but also any information “regarding the retrieval, storage or transmission of national defense information or classified material.”

The government has not said what specific documents investigators thought Mr. Trump had kept at Mar-a-Lago, nor what they found there. The inventory of items was vague, including multiple mentions of “miscellaneous top-secret documents,” for example.

But the invocation of “the retrieval, storage or transmission” of secret information in the warrant offered a potential clue to at least one category of the files the F.B.I. may have been looking for. One possible interpretation of that phrase is that it hinted at encrypted communications, hacking or surveillance abilities.

The other two laws invoked in the warrant do not have to do with national security.

The second, Section 1519, is an obstruction law that is part of the Sarbanes-Oxley Act, a broad set of reforms enacted by Congress in 2002 after financial scandals at firms like Enron, Arthur Andersen and WorldCom.

Section 1519 sets a penalty of up to 20 years in prison per offense for the act of destroying or concealing documents or records “with the intent to impede, obstruct or influence the investigation or proper administration of any matter” within the jurisdiction of federal departments or agencies.

The warrant does not specify whether that obstruction effort is a reference to the government’s attempts to retrieve all the publicly owned documents that should be given to the National Archives and Records Administration, or something separate.

The third law that investigators cite in the warrant, Section 2071, criminalizes the theft or destruction of government documents. It makes it a crime, punishable in part by up to three years in prison per offense, for anyone with custody of any record or document from federal court or public office to willfully and unlawfully conceal, remove, mutilate, falsify or destroy it.

While the list of items that the search warrant approved F.B.I. agents to seize singled out “documents with classification markings,” it contained a separate catchall phrase that appeared to be intended to scoop up any government-owned documents that Mr. Trump had unlawfully taken and kept.

Notably, another penalty in Section 2071 for any conviction is that the defendant is barred from holding federal office. Against the backdrop of widespread expectations that Mr. Trump intends to run for president again in the 2024 election, that provision has attracted particular attention.

However, many legal specialists believe that any conviction under Section 2071 would be unlikely to block Mr. Trump from running again. Supreme Court rulings suggest that because the Constitution sets out criteria for who is eligible for the presidency, Congress cannot, by criminal law, alter that standard.