Home sales and prices are dropping in many cities across the country after rising for years, and the damage is spreading

China’s deflating property bubble is imperiling the world’s second-largest economy with effects that could ripple for years.

Home prices are dropping in many cities after a long period of increases, data from Chinese real-estate developers and official statistics show. Sales of apartments nationwide by the country’s largest developers have slumped annually for 13 consecutive months, according to industry-data provider China Real Estate Information Corp.

And millions of “presold” apartments that buyers have paid for remain unfinished, leading some purchasers to threaten to withhold mortgage payments. Home buyers could refuse to pay back up to $370 billion in home loans if their apartments aren’t finished, analysts estimate. Most Chinese banks, they say, should be able to absorb the losses, making a financial crisis unlikely.

The bigger risk is to China’s economy. Bank of America research analysts noted in a report last month that approximately 9% of the housing floor space that was presold in 2020 and 2021 risks not being completed on schedule because of developers’ financial troubles, affecting roughly 2.4 million households.

A personal, guided tour to the best scoops and stories every day in The Wall Street Journal.

“Such incidents, if left unchecked and spread out, could dampen market confidence, hit property sales and investment, weigh on economic growth, and cause social instability” right before an important twice-a-decade Communist Party congress later this year, the analysts wrote. The closely watched conclave is expected to see Chinese President Xi Jinping secure an unprecedented third term in power.

China recorded a 0.4% expansion in second-quarter gross domestic product from a year ago, its worst economic performance since the start of the coronavirus pandemic. While much of the slowdown was due to Covid-related lockdowns and restrictions, a 7% contraction in the real-estate sector contributed to the weak output.

The damage, which is spreading across industries from building materials to real-estate services and is causing loan losses to pile up at banks, will be difficult to repair quickly, say economists.

The property slump is also hitting consumer confidence when China’s broader slowdown is weighing on personal incomes and asset values. “The economic prospects, the consumer sentiment and the way people are looking at the future have changed,” said Alicia García-Herrero, Asia-Pacific chief economist at investment bank Natixis. “I don’t think it’s a crisis, as some people call it. But it is one more big reason behind the idea that China’s economy is going to decelerate.”

Credit stress in China’s property sector hasn’t spread to global markets, though international investors have suffered roughly $100 billion in losses from Chinese developers’ dollar bonds due to defaults and steep price declines, according to data from Bloomberg and Barclays Research.

Chinese commercial banks have been slow to recognize and report nonperforming real-estate loans, but many have dialed back lending to the property sector. Land sales to developers have also plummeted, cutting off a major source of revenue for local governments and signaling that far fewer new property projects will be rolled out in the coming years.

“We’ve never seen a property market slowdown of this size and severity” in China, said Logan Wright, director of China markets research at Rhodium Group, a New York-based research firm that closely follows China. There is little Chinese authorities can do, he said, to turn things around and offset the economic impact of the property downturn.

China’s real-estate downturn harks back to its government’s effort in recent years to cool a housing frenzy and deflate what it saw as a bubble that was threatening to make homes unaffordable for many. Regulators in 2020 placed curbs on developers’ borrowing, causing banks and other lenders to pull back and resulting in a credit crunch for many developers.

More than 30 developers, including the property giant China Evergrande Group, have since defaulted on their international debt. Their apartment sales in mainland China plunged as home buyers became aware of the developers’ financial woes. The Asian U.S.-dollar-bond market has all but shut off credit to Chinese developers, and more defaults are likely.

China’s real-estate sector has gone through downturns before, as in 2013 and 2014 when home prices fell and sales and property investment slowed. Many developers suffered revenue declines, and some struggled for months with large inventories of unsold homes, but they didn’t lose access to funding.

Home prices resumed their upward trajectory in the years that followed, while developers racked up year after year of record sales. Economists Kenneth Rogoff of Harvard University and Yuanchen Yang of the International Monetary Fund estimated that real estate and related industries made up around 26% of China’s GDP in 2018, in an update to a 2020 research paper they wrote. That number has stayed fairly stable in recent years, they said.

The latest downturn is partly a result of years of what proved to be overbuilding and excessive borrowing by Chinese developers.

A residential district in Lu'an.PHOTO: RAUL ARIANO FOR THE WALL STREET JOURNAL

A big source of pain is from dwindling revenue from presales. Around 80% of new home sales in China over the last decade were of partially built properties that developers promised to deliver in one to three years. Proceeds from these presales became the biggest source of funding for developers, which counted on increasing sales of unfinished apartments to keep money flowing for immediate needs.

Local governments enabled the practice by issuing presale permits to developers for projects that had completed as little as 25% of their planned construction. The developers could sell apartments for their full price, while buyers in many cases made down payments of around 30% and took out mortgages for the rest.

The money went into escrow accounts to pay for the construction, but loosely defined rules let many developers withdraw cash before they completed the buildings. Problems arose when developers, with revenues from presales declining and loans harder to obtain, started running short of cash last year to service their debts.

Last year, when Evergrande began wobbling and its shares and bonds tumbled in value, people who had recently bought apartments at one of its developments in Jingdezhen, a city in China’s Jiangxi province, began to worry.

The property giant in early 2021 presold the 14-tower project, called Evergrande Longting, which promised to deliver the homes to buyers in 2023. A few months after hundreds of people began paying their mortgages, home buyers noticed that construction had slowed and that workers at the site had dwindled to a few dozen from hundreds previously, according to one Jingdezhen resident who said he had bought a home in the project.

In May 2021, on-site activity had stopped, according to a letter that many home buyers signed. Construction resumed in late October and stopped completely in June this year, the letter said.

On June 30, homeowners sent out their joint letter, which also said they would stop making their mortgage payments if the construction didn’t resume before Oct. 20. The letter, widely circulated on Chinese social media, inspired similar movements among home buyers of other unfinished property projects.

Last month, some home buyers went to the municipal government’s office again, demanding a plan to ensure their homes would be delivered, according to videos of confrontations provided by the Jingdezhen resident. Police took three people away, he said. The Jingdezhen government subsequently informed the owners that the project would be delivered by the end of next year, he said.

Evergrande and the local government didn’t respond to requests for comment.

About 500 miles north in Zhengzhou, people who bought apartments in dozens of unfinished projects—by Evergrande and other developers—have similarly banded together and threatened to stop paying on loans.

As in many cities and towns across China, rapid urbanization has transformed Zhengzhou from an industrial hub into a metropolis. Its property sector took off, with an abundant supply of land and developers launching and selling residential projects whose blueprints included swimming pools, skating rinks, landscaped gardens and shopping malls. 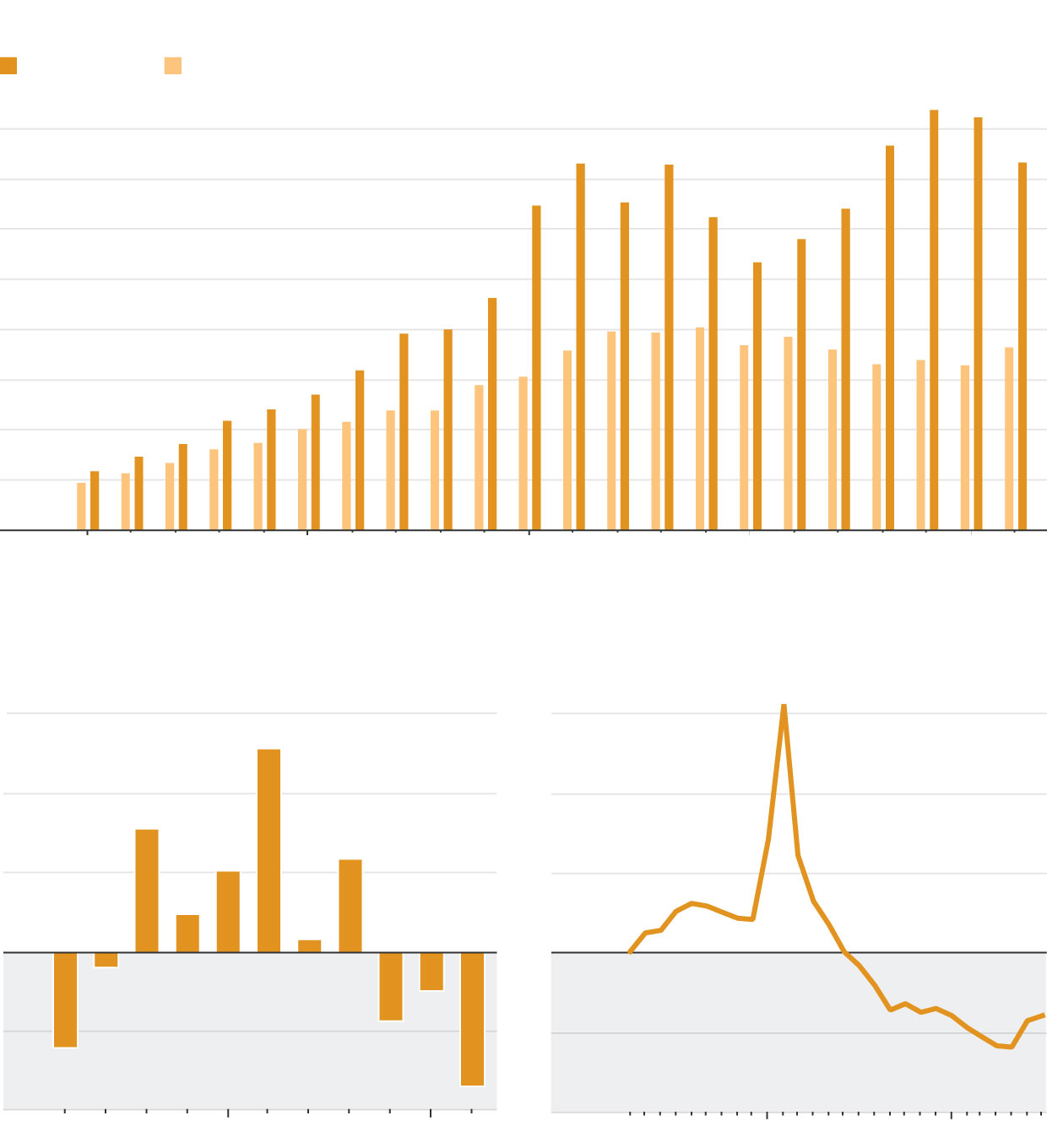 change from a year earlier

change from a year earlier

From 2018 to 2020, Zhengzhou ranked second among Chinese cities in annual home sales by floor area, as average selling prices for residential homes surged 40%, according to data provider Wind.

In July 2021, heavy rainfall caused major floods in the city. A Covid-19 lockdown followed the next month. Construction subsequently slowed or stopped at projects of multiple cash-strained developers, several affected home buyers in Zhengzhou said. New home sales in the city fell 30% in 2021 from 2020, according to data from the Zhengzhou housing authority.

Complaints piled up on an online message board monitored by the city’s government, with many lamenting how they couldn’t get answers from the developers or government officials.

Last month, when home buyers in Zhengzhou learned about the mortgage protest at the Evergrande project in Jingdezhen, they followed suit in an effort to pressure local authorities and developers to resume the construction of their homes. Buyers of more than 30 projects in Zhengzhou have said they intend to stop paying on their home loans—the most of any city in China—according to China Real Estate Information, the real-estate data provider.

The city’s government said last week it would set up a real-estate relief fund to address the issues, stating it would “solve the urgent difficulties of developers’ broken funding chains, alleviate the social problems and possible systemic financial risks caused by the mortgage boycotts and the construction suspension of housing projects, and boost market confidence.”

The fund will start with the equivalent of $1.5 billion in government contributions and could receive billions more from state-owned enterprises and financial institutions, the government said.

The mortgage revolt—which spread to more than 300 property projects before China’s censors deleted many social-media posts on the subject—has sparked concerns about the stability of the country’s banks. Chinese financial institutions collectively reported the equivalent of $5.8 trillion in outstanding individual mortgages at the end of March this year, according to central-bank data.

The Evergrande Fairyland complex under construction in Lu'an in October.PHOTO: RAUL ARIANO FOR THE WALL STREET JOURNAL

Central-government policy makers have refrained from any broad real-estate sector bailout, repeating their mantra that “Houses are for living in, not for speculation.” They have instead tasked local governments with addressing the concerns of home buyers and making sure that unfinished property projects are completed.

Few cities besides Zhengzhou have said how they intend to fix the problem. Before the recent mortgage protests, many city governments had tried to help developers revive sales by lowering down payments, reducing interest rates, offering cash subsidies and removing restrictions that had prevented people from buying multiple homes.

Betty Wang, senior China economist at ANZ, an Australian banking group, said that in the absence of clear guidance from top policy makers, the Chinese property sector will continue to downsize for some time. “The market has already had a hard landing,” she said, adding: “It will be very difficult for many developers to recover from this downturn.”