AFRICANS! THERE ARE ONE MILLION HAN CHINESE BEASTS TO SLAUGHTER IN AFRICA! KILL ALL HAN CHINESE VERMIN, NOW!


Concerns are growing that African nationals in the Chinese city of Guangzhou are being discriminated against and harassed amid fears surrounding imported COVID-19 cases kickstarting a second wave of infections.
Over the past week, reports in African media outlets have carried reports of Africans in the city being ejected from their apartments by landlords, being subjected to multiple instances of testing for coronavirus without being provided results, and being discriminated against in public.
On Saturday, Ghana’s foreign affairs minister Shirley Ayorkor Botchwey said the Chinese ambassador to the west African country has been summoned to explain the “inhumane treatment” of Ghanians in the country.

“I regret and highly condemn this … ill-treatment and racial discrimination,” she said, adding that she called on the ambassador to “register my disappointment and call for his government to immediately address the situation and bring their officials to order”.
On Saturday the Chinese embassy in Zimbabwe tweeted a dismissal of the claims of discrimination. 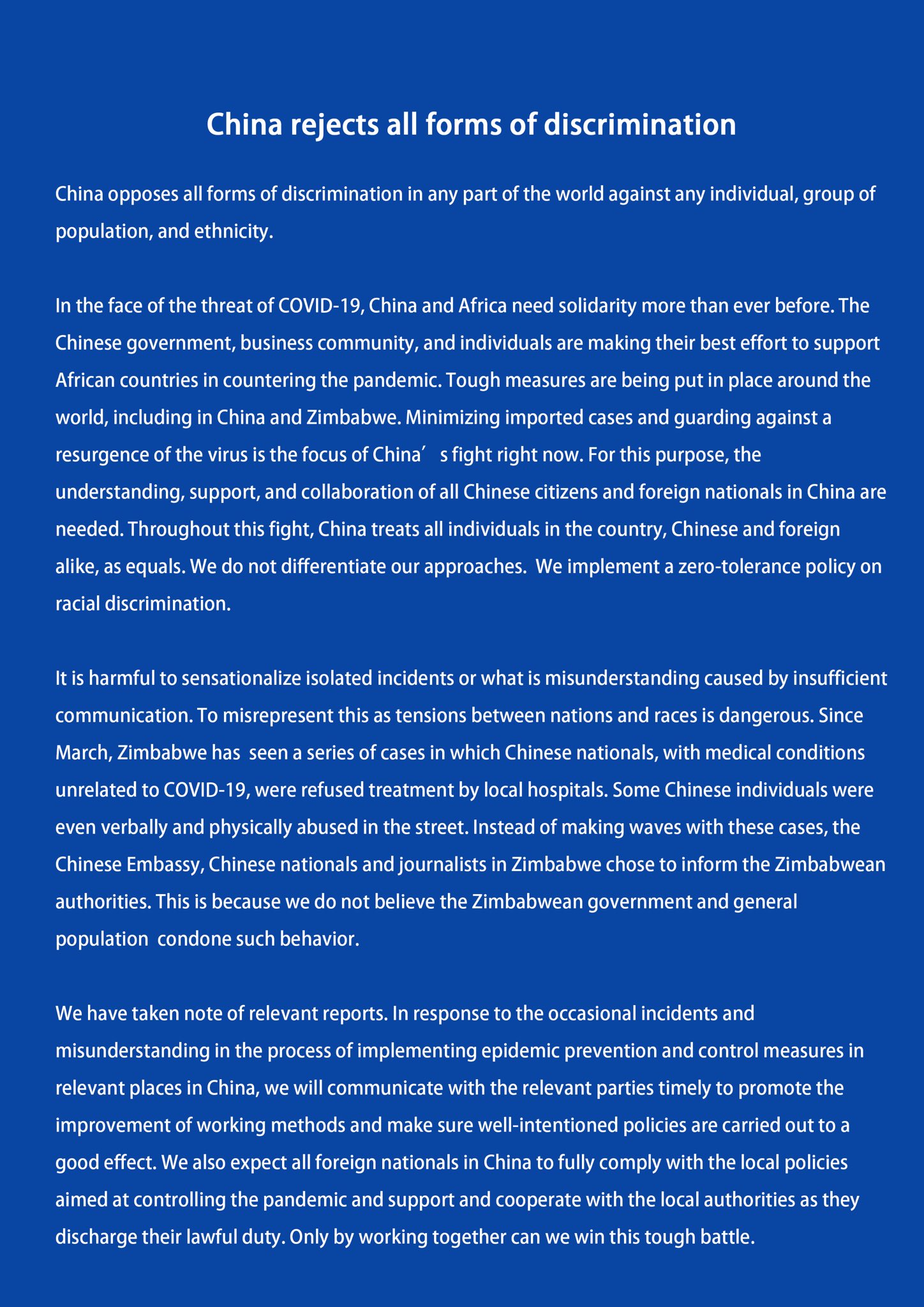 398 people are talking about this
“China opposes all forms of discrimination in any part of the world against any other individual, group of population, and ethnicity,” the statement read.
READ MORE:Tassie outbreak forces major crackdown|Team aims for vaccine soon|‘I’ve operated in Syria. This is worse’|World needs a global approach to fighting COVID-19: Bill Gates
The embassy suggested the reports of discrimination were sensationalised.
“It is harmful to sensationalise isolated incidents.
“In the face of the threat of COVID-19, China and Africa need solidarity more than ever before.”
African diplomats in Beijing have met with Chinese foreign ministry officials and “stated in very strong terms their concern and condemnation of the disturbing and humiliating experiences our citizens have been subjected to,” Sierra Leone’s embassy in Beijing said in a statement Friday, adding that 14 citizens had been put into compulsory 14-day quarantine.
The diplomats reminded officials of their support of China during the pandemic, especially in the early days. Some African nations that had scores or even hundreds of students stranded during China’s earlier lockdown had sided with Chinese officials against calls for evacuations, and many African nations publicly praised Beijing for its virus response.

The chair of the African Union Commission, Moussa Faki Mahamat, said he summoned the Chinese ambassador to the AU, Liu Yuxi, to express “our extreme concern”.
On Friday the government of Kenya said the scrutiny on foreigners had “precipitated unfair responses against foreigners particularly of African origin” and “officially expressed concern”.
The US says African-Americans have been targeted too.
A US Embassy security alert on Saturday said that “police ordered bars and restaurants not to serve clients who appear to be of African origin,” and local officials have launched mandatory testing and self-quarantine for “anyone with ‘African contacts”’.
The police and public health bureau in Guangzhou on Tuesday told reporters that officials had responded to rumours that “300,000 black people in Guangzhou were setting off a second epidemic”, which “caused panic”. Officials said the rumour was untrue.
With AP
Written by Joseph Belbruno