Sick WHO not only ailing but failing

The World Health ­Organisation appears ineffectual and is muddling its way through the greatest health crisis in a century.
By PAUL MALEY
If critics of the World Health ­Organisation needed any more proof that the global body responsible for disease prevention is ­itself seriously ill, it came, as if on cue, from the under-fire authority itself early this week.
Having argued for months in its official guidelines that China’s so-called wet markets provided an ­essential source of income to some of the world’s poorest citizens, the WHO’s special envoy for COVID-19, David Nabarro, performed an apparent about-face.
“There’s very clear advice from the Food and Agriculture Organisation and WHO that there are real dangers in these kinds of environments,” Nabarro told the BBC. “Seventy-five per cent of emerging infections come from the animal kingdom. It’s partly the markets, but it’s also other places where humans and animals are in close contact. Just make certain that you’re not creating opportunities for viral spread.”

Wet markets have been the source of huge contention since the coronavirus emerged from the Huanan Seafood Wholesale Market in Wuhan late last year. Their vast array of livestock and exotic animals, combined with poor hygiene, has long made them vectors for new disease. As one observer bluntly puts it, they are “cesspits of blood, entrails and excrement”.
READ MORE:Risk Trump could get fooled again|WHO boss responds to Trump defunding|WHO in need of reform: Sharma|WHO COVID-19 response has worsened the disaster|Heat on Morrison over WHO funding
With COVID-19 infecting more than two million people and killing almost 135,000 people so far, closing them would seem a ­no-brainer, despite whatever cost it might have on local economies.
The WHO’s change of position — if it was one — has deepened concerns that the body charged with ensuring global health is muddling its way through the greatest health crisis in a century.
Instead of leading the response to the coronavirus outbreak, the WHO has been accused of toeing the Chinese government line, ignoring information about the true extent of the virus and opposing early moves to contain the spread of disease, such as travel bans from China. Worst of all, it appears ineffectual and irrelevant in the face of a pandemic, one in which the expertise of the world’s premier health advisory body should be at the forefront.
“The WHO has not covered itself in glory,” Lowy Institute Director Michael Fullilove tells The Australian. “And the director-­general himself (Tedros Adhanom Ghebreyesus) looks seriously compromised.”
Broad criticism
On Wednesday, Donald Trump announced the US would suspend funding the organisation over what he said was its mismanagement of the pandemic. “The reality is the WHO failed to adequately obtain, vet and share information in a timely and transparent fashion,” the US President said.
It was widely seen as an attempt by Trump to deflect attention away from his own poor handling of the crisis, which has come under harsh scrutiny and which threatens to derail his bid for re-election in November. But the move also illustrates the extent of the frustration — in the US and beyond — with the WHO’s approach to the pandemic.
Trump’s decision drew a careful response from Tedros, who on Thursday said his organisation would review its operations in light of the US decision, which will deprive the WHO of $707m in ­annual funding, about 15 per cent of its budget. (By way of comparison, China has donated just $133m to the WHO in the past two years). 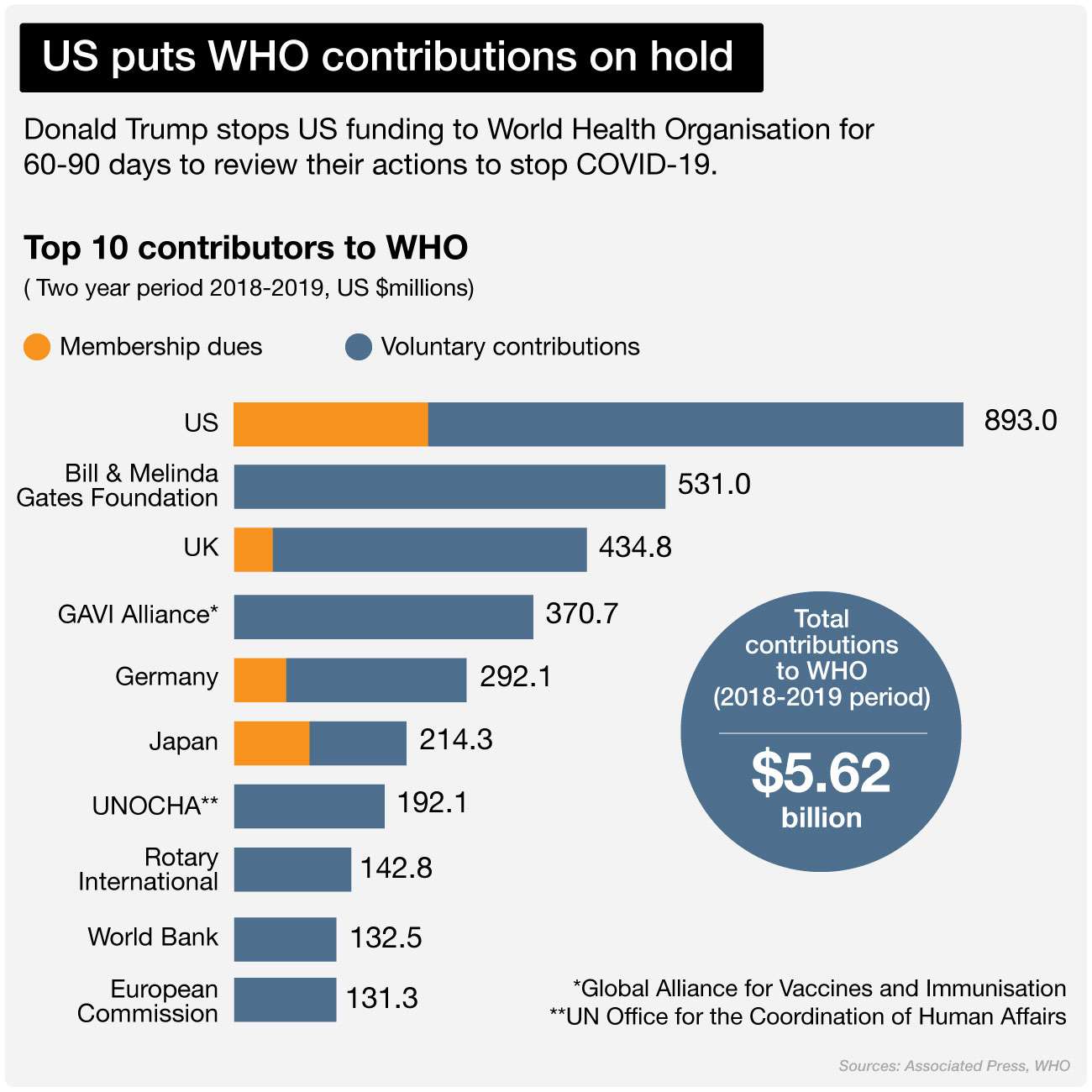