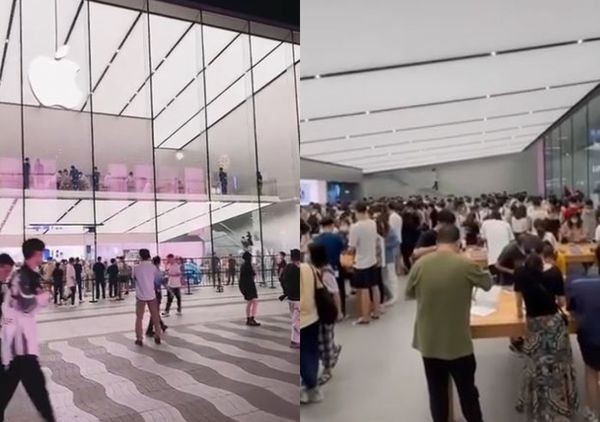 Despite the Chinese-state-run media frenzy over the release of Huawei scion Meng Wanzhou (孟晚舟) on Friday (Sept. 24), Chinese consumers that day were fixated on the release of the iPhone 13 series, with hordes of eager buyers queuing up outside Apple stores in droves across the country. The sole standout was a man captured on video over the weekend admonishing the Apple fans to buy Chinese-made Huawei phones instead.

On Saturday, video surfaced on China's Weibo showing a man staging a protest outside an Apple Store in Zhejiang's Hangzhou. The man was spotted wearing a white shirt and black pants pacing back and forth in front of Apple's flagship Westlake store.

In the video, the man can be seen holding a loudspeaker as he repeatedly shouts "support made in China, support Huawei!" However, as Taiwanese Twitter user Otto Huang points out, "the crowd of people buying Apple phones is indifferent. There is an endless stream of people buying Apple [products] and their enthusiasm is unabated."

Later in the clip, the person shooting the video begins to enter the store with a line of people streaming in a single-file line as they completely ignore the man's impassioned pleas. The man can be heard repeating his mantra twice, with the second instance conveying increased urgency and desperation as the camera-holder passes the point of no return inside the store.

Once fully inside the store, the man's voice can no longer be heard as excited shoppers press shoulder-to-shoulder to gaze at Apple's latest gadgets.

When the video was first released on Weibo, it stirred a heated discussion among netizens:

"Although I've never used an iPhone, with this kind of behavior, I have to say there's a hole in his brain."

"He's willing to make a fool of himself just for the sake of generating buzz."

"It's nauseating to watch this."

"Kidnapping morality in a socialist country."