After years of lax oversight, the smaller banks that powered the country’s economic growth have racked up unsustainable bad debts

By
Chao Deng
Jan. 21, 2020 12:28 pm ET
For years, China’s small banks had a field day. They lent to overstretched borrowers, disguised loans as investment products and fueled their business with short-term funds.
One chairman dined out on delicacies like sea cucumber while ramping up lending to politically connected borrowers. Some banks funneled money to their own shareholders, others hid debt with financial engineering and haven’t reported complete information for years.
Regulators used a light touch, eager to keep credit flowing to areas ignored by the country’s big national lenders. The country’s years of rapid economic growth papered over shoddy practices.
Now, the bill is coming due. China’s growth rate is down by more than half from its peak a decade ago, nonperforming loans have expanded and the government is reining in banking risk. China is confronting a bank cleanup that could require hundreds of billions of dollars in bailouts.
In recent months, Beijing has come to the aid of at least six regional lenders, including one rescue that marked the first time national authorities publicly seized control of a bank since the 1990s. According to UBS research, at least two dozen banks need a total of $339 billion in fresh funding to raise the capital they use to offset risks to 12.5%, a level considered healthy by global norms.
The problems could reverberate in China’s already slowing economy, which grew 6.1% last year, down from a recent high of 14.2% in 2007. Smaller financial institutions and regional lenders powered the expansion in much of the country. China’s big banks are known for instead focusing lending on inefficient state enterprises.
The lack of transparency in China’s financial system makes it impossible to know how deep regional lenders’ problems run. More than a half-dozen Chinese lenders haven’t disclosed financial statements in recent years. While the official nonperforming loan ratio—outstanding bad loans to total credit—in China is less than 2%, analysts say it is likely much higher at smaller banks.
“Regulators are petrified of overplaying the situation for fear it’s going to start systemic panic,” said Fraser Howie, an independent analyst and author of books on China’s financial system.
China, with its enormous financial reserves, can afford a wave of bailouts. S&P Global analysts estimate that troubled banks account for only about 4% of total assets in China’s banking system. The country’s four biggest lenders, the world’s largest banks by assets, aren’t among the troubled banks.
Hengfeng Bank, in Shandong province southeast of Beijing, is one of the banks getting state help after nearly doubling its assets to a peak of $155 billion in three years. Its chairman during its period of fastest growth, a town doctor turned banking magnate, was known for dining luxuriously before drawing authorities’ ire for the way he took control of the bank and steered the bank into higher-risk businesses. A previous chairman had also drawn scrutiny, and was arrested for corruption.
Another problem lender, Bank of Jinzhou in northern China, saw its ratio of nonperforming loans suddenly jump to 6.9% in June from 1% two years earlier. It doled out loans to its own shareholders, who later ran into financial difficulties, and its auditors resigned, pointing to signs of fraud.
Rumors on social media that other small lenders could soon collapse have triggered unrest in recent months. Authorities sent more than 100 police officers to control crowds of depositors lining up to get money from Yingkou Coastal Bank east of Beijing.
At Yichuan Rural Commercial Bank in central China, authorities directed local state-owned firm employees to help stem the outflow by depositing their own cash. Bank officers dangled inducements, including plastic chairs and tea thermoses to take home, so customers would keep deposits in the bank.
When regulators bailed out Baoshang Bank, a troubled lender in Inner Mongolia, in May, it sparked a temporary funding crisis for other small banks. Beijing had to flood the financial system with cash to prevent contagion.
In Yichuan, a spokesman at the bank declined to comment. He directed questions to the city government, which also declined to comment. Bank of Jinzhou didn’t respond to request for comment; Baoshang Bank and Yingkou Coastal Bank couldn’t be reached for comment.
China’s banking regulator has conceded there are problems among small- and midsize lenders after years of “blind development” but said “the risks are controllable.” Officials are encouraging healthy financial institutions to invest in weaker ones and stand ready to inject capital into underwater banks as a last resort, a spokesman for the China Banking and Insurance Regulatory Commission said.
Regulators have eased strictures recently by lowering the amount of reserves smaller banks must keep with the central bank, to give them more financial flexibility. Analysts have warned that regulators’ reluctance to let unhealthy banks go bust in the past may have encouraged some to take chances in expectation of state support.
James Stent, an expert on China’s banking sector and author of the book “China’s Banking Transformation,” said he thinks Beijing can resolve small banks’ troubles, but it will require taking over, merging and injecting money into as many as 100 of them, including small rural lenders.
As China’s economy took off, Beijing encouraged local banks to grow faster, allowing some to expand nationally. Regulators thought smaller lenders could help serve customers overlooked by big banks, and bring more competition and innovation to the financial sector.

Should international investors be worried about China’s debt? Join the discussion below.
Small and medium lenders now account for nearly half of total bank loans in China, according to brokerage firm CLSA.
Troubles are emerging now for two reasons. China’s weakened economy is unmasking dud loans made when conditions were better. Beijing has also tightened regulations to rein in excess lending, forcing banks to recognize more nonperforming loans.
Hengfeng Bank was one of the biggest lenders to land in trouble.
Hengfeng’s financial statements have been incomplete since early 2017, when the bank showed a rapidly deteriorating balance sheet, with estimated losses from bad investments surging. The bank lacked sufficient capital to meet industry requirements.
Originally known as Evergrowing Bank, it launched in 1987 in the seaside city of Yantai to support housing with inexpensive mortgages. It grew slowly.
In 2003, the bank won a license to expand nationally and changed its name to Hengfeng. In 2013, the bank was taken over by Cai Guohua, who had entered local government and become a vice mayor. 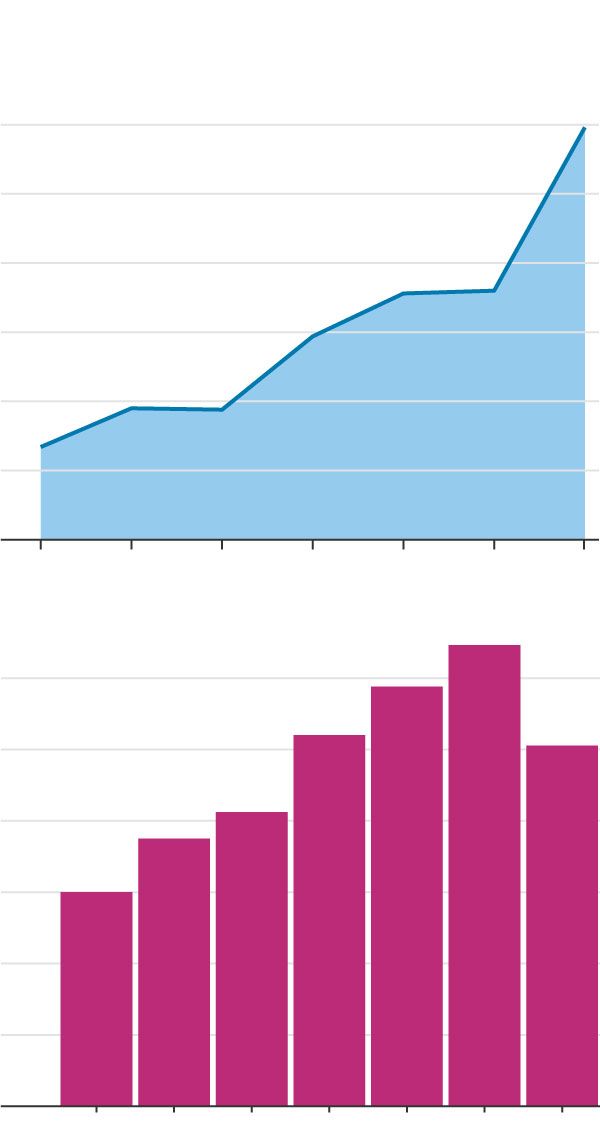 Nonperforming loans as a percentage
of total loans
3.0%
2.5
2.0
1.5
1.0
0.5
0
2012
’13
’14
’15
’16
’17
’18*
Total assets
$180 billion
150
120
90
60
30
0
2012
’13
’14
’15
’16
’17
’18
Mr. Cai had few checks on his power at the bank, according to two former employees. He arranged huge portraits of himself to hang inside branches, local media reported, and circulated his own “Chairman’s Philosophy” for staff to study, one of the former employees said.
Mr. Cai expanded Hengfeng’s number of branches to 328 in 2016 from 146 in 2013. Still, Hengfeng didn’t have the ability to attract deposits as easily as bigger national lenders, so it cranked up borrowing in the interbank market from other financial institutions to cover liabilities.
It also moved more aggressively into a business known as bankers’ acceptance notes, which let it boost profits with limited capital.
The notes are a kind of IOU, similar to postdated checks, issued and guaranteed by banks. Manufacturers use the paper slips to pay one another in lieu of cash. Some banks also trade the notes, the market values of which go up and down, before they come due.
Hengfeng earned a reputation as one of the most ambitious players. One banker who dealt with Hengfeng employees said they would sometimes buy bills in the morning and resell them the same day. Mr. Cai more than doubled the bank’s acceptance notes business in 2015, to $41 billion.
Nearly half of the 63 penalties Hengfeng has faced from regulators were related to its dealings in bankers’ acceptance notes, according to regulatory disclosures. The banking regulator’s statements describe the bank using acceptance notes to inflate assets and failing to check the authenticity of bills, some of which proved to be fraudulent.
Mr. Cai also oversaw ramped-up lending to politically connected and high-risk borrowers, according to court filings and people knowledgeable about the loans.
In one case in 2015, Hengfeng offered about $1.4 million in loans to a factory making solar-powered water heaters, along with a larger credit line as long as the borrower agreed a portion would go to paying off a previous loan Hengfeng made to a different borrower that went bad, people with knowledge of the transaction said.
The water-heater firm later suffered a liquidity crunch and defaulted.
Another flawed project Hengfeng supported was a pedestrian street with restaurants on the outskirts of Yantai. Local officials had championed the area in previous years to promote regional cuisine and attract business guests.
By the time of Mr. Cai’s involvement, the project’s feasibility was in question after an anticorruption campaign led by Chinese President Xi Jinping put a chill on entertainment expenditures.
Still, credit flowed to the project, with Hengfeng funneling 20 million yuan, or about $3 million, in a personal loan to a businessman who was working with the developer of the project, according to a person close to the deal. Beijing rules limited high-risk lending directly to property developers.
The project ultimately failed. Today, doors are chained up and signs indicate authorities have seized the project.
Hengfeng’s ratio of loans qualifying as bad debts, or close to going bad, was approaching 6% in 2016, the most recent period for which complete figures are available, from 2.5% in 2013.
Its investment receivables, a loosely regulated category of assets that many Chinese banks use to disguise risky loans as investments, reached $65 billion by September 2017. That was more than a third of the bank’s total assets, and nearing the size of its conventional loans on book at the time. The bank had set aside only $750 million in impairments, or the amount banks set aside to cover losses, for loans and investments and other assets, or roughly 1% of total loans.
Authorities detained Mr. Cai in 2017, according to Chinese state media, accusing him of serious disciplinary violations, a common code for corruption charges.
One lawyer representing Mr. Cai, whose whereabouts aren’t publicly known, declined to comment, while another didn’t respond to inquiries.
Hengfeng’s previous chairman, Jiang Xiyun, last month was convicted of corruption and sentenced to death with a two-year reprieve.
Authorities have fined Hengfeng $23 million for violations including providing false data in statements and investing in risky assets as a way of concealing bad loans.
An arm of China’s sovereign-wealth fund is coming to the aid of the bank in a bailout of 100 billion yuan, or about $14.6 billion, the bank said last month.
A Hengfeng spokesman declined to give details about the bank’s restructuring.
Hengfeng faces challenges trying to remake itself as a retail lender focused on its home province of Shandong. The province’s manufacturing-heavy economy, which was growing at an annual pace of around 10% when Mr. Cai took over, slowed to 5.4% in the third quarter last year, the third slowest among 31 Chinese provinces and municipalities.
In February, Hengfeng issued a loan to Yihecheng Group, a maker of glass containers that needed to pay off earlier borrowings from Hengfeng, according to court documents.
The firm defaulted two months later. During a recent visit, staff members of the glass company worked quietly in a drab-looking building. They declined to comment.
—Grace Zhu contributed to this article.
Written by Joseph Belbruno