With even more soldiers patrolling both sides of the disputed areas, any miscalculation could turn deadly. 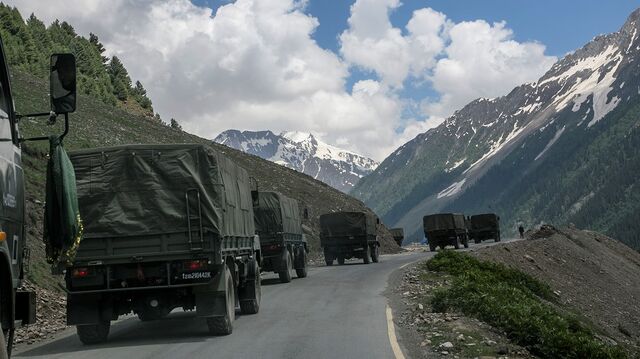 India has redirected at least 50,000 additional troops to its border with China in a historic shift toward an offensive military posture against the world’s second-biggest economy.

Although the two countries battled in the Himalayas in 1962, India’s strategic focus has primarily been Pakistan since the British left the subcontinent, with the long-time rivals fighting three wars over the disputed region of Kashmir. Yet since the deadliest India-China fighting in decades last year, Prime Minister Narendra Modi’s administration has sought to ease tensions with Islamabad and concentrate primarily on countering Beijing.

Over the past few months, India has moved troops and fighter jet squadrons to three distinct areas along its border with China, according to four people familiar with the matter. All in all, India now has roughly 200,000 troops focused on the border, two of them said, which is an increase of more than 40% from last year.

Both the Indian Army and a spokesman for the Prime Minister’s Office in New Delhi didn’t respond to requests for comment.

Whereas previously India’s military presence was aimed at blocking Chinese moves, the redeployment will allow Indian commanders more options to attack and seize territory in China if necessary in a strategy known as “offensive defense,” one of the people said. That includes a lighter footprint involving more helicopters to airlift soldiers from valley to valley along with artillery pieces like the M777 howitzer built by BAE Systems Inc.While it’s unclear how many troops China has on the border, India detected that the People’s Liberation Army recently moved additional forces from Tibet to the Xinjiang Military Command, which is responsible for patrolling disputed areas along the Himalayas. China is adding fresh runway buildings, bomb-proof bunkers to house fighter jets and new airfields along the disputed border in Tibet, two of the people said. Beijing also adding long-range artillery, tanks, rocket regiments and twin-engine fighters in the last few months, they said.

China and India boost military capability along their disputed boundary

"The current situation on the border between China and India is generally stable, and the two sides are negotiating to resolve relevant border issues," Chinese Foreign Ministry spokesman Wang Wenbin told a regular press briefing in Beijing Monday in response to a question about troop deployment. "In this context, the words, deeds and military deployments of relevant military and political leaders should help ease the situation and increase mutual trust between the two sides, not the other way around."

The fear now is that a miscalculation could lead to an even deadlier conflict. Several recent rounds of military-diplomatic talks with China have made minimal progress toward a return to the quiet status quo that had prevailed along the border for decades.“Having so many soldiers on either side is risky when border management protocols have broken down,” said D. S. Hooda, a lieutenant general and former Northern Army commander in India. “Both sides are likely to patrol the disputed border aggressively. A small local incident could spiral out of control with unintended consequences.”The northern region of Ladakh — where India and China clashed several times last year — has seen the largest increase in troop levels, three of the people said, with an estimated 20,000 soldiers including those once engaged in anti-terrorism operations against Pakistan now deployed in the area. The reorientation means India at all times will have more troops acclimatized to fight in the high-altitude Himalayans, while the number of troops solely earmarked for the western border with Pakistan will be reduced.

Indian Defense Minister Rajnath Singh, accompanied by senior military officials including the Army Chief General M. M. Naravane, were in Ladakh to review military preparedness, a press statement said Sunday. It was Singh's first visit to the area since the February disengagement of Indian and Chinese troops from the banks of Pangong Tso, a glacial lake some 14,000 feet above sea level.India has also obtained an offensive capability along the southern Tibetan plateau near the center of the border. In that more populated area, regular soldiers outfitted with machine guns have joined lightly armed paramilitary officers, the people said.In the far eastern state of Arunachal Pradesh, where most of India’s border forces had been located and where much of the 1962 India-China war played out, newly acquired French-made Rafale fighter jets armed with long-range missiles are being deployed to support the boots on the ground, the people said.The Indian Navy is also taking action, putting more warships along key sea lanes for longer durations. Its efforts include studying energy and trade flows in and out of China, according to an Indian Navy official who asked not to be identified, citing rules for speaking to the media.

The maneuvering follows a period of relative calm after a summer of fighting last year that saw India lose control over about 300 square kilometers (115 square miles) of land along the disputed mountainous terrain, Bloomberg reported. The worst clash in June left 20 Indian and four Chinese soldiers dead.

For Prime Minister Narendra Modi, the shift comes as the pandemic ravages India’s hinterland and the economy contracts by the worst in four decades, leaving less money for defense. At the same time, India is stepping up security cooperation with fellow Quad partners — the U.S., Japan and Australia — to gain leverage against China.“The crisis over the last year has brought home the reality to India’s decision makers that China presents the biggest strategic challenge in the future, and it has led to shifting the attention away from Pakistan,” Sushant Singh, a senior fellow at the Centre for Policy Research and visiting lecturer at Yale University said. “As this plays out fully, it will alter the geopolitics of the region significantly.”Still, despite India’s strategic shift and the troop movements, China retains an advantage along the border, said Sana Hashmi, a visiting fellow at the Taipei-based Taiwan-Asia Exchange Foundation.“The economic and military asymmetry will remain in place,” she said. “And there is a long way to go for India to bridge this asymmetry.”