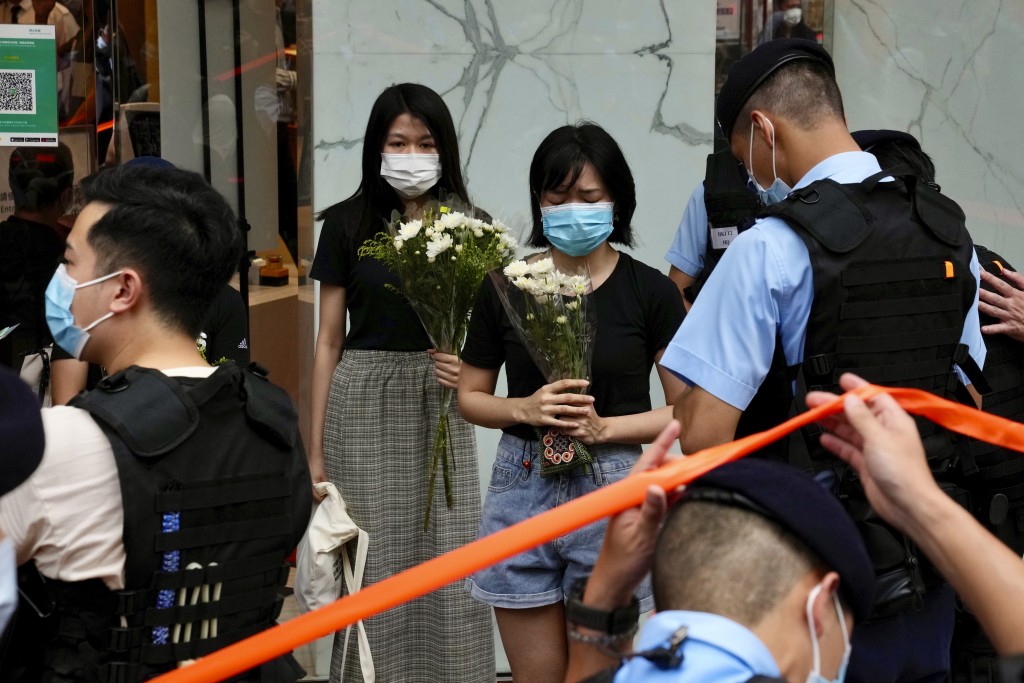 People hold flowers to mourn the death of an assailant who stabbed a police officer in Hong Kong. (AP photo)

TAIPEI (Taiwan News) — Police officers in Hong Kong were frisking passersby on Friday (July 2) and preventing people from paying their respects to the man who killed himself after attacking a police officer.

The attack was on Thursday (July 1), when the Chinese Communist Party (CCP) celebrated its 100th anniversary. Videos show the 50-year-old Leung Gin-fai (梁健輝) stab a police officer and then kill himself by thrusting the knife into his chest.

Police later released a statement calling the assault a "lone wolf terrorist attack" and condemned support for Leung. According to an online survey from RFA, around 80 percent of respondents considered Leung a martyr while only 3 percent believed him to be a terrorist.

On Friday night, people went to the scene of the attack and tried to lay down flowers, but were frisked, given tickets, and moved on. They were told not to put down flowers as it would be considered to be illegally discarding trash, RFA reported.

At least three people were taken into police custody. These included two individuals who refused a fine for breaking social distancing rules and another person suspected of carrying a knife.

Leung reportedly lived with his parents and has no criminal record. Police found suicide notes at his house, expressing discontent with society and the police.

Leung was a procurement director at Hong Kong beverage company Vitasoy. After Leung's death, the company issued an internal email expressing condolences to Leung's family. The letter triggered an outcry from Chinese netizens, calling for a boycott of Vitasoy.

The company responded with a statement on its Weibo account on June 3, saying it supported the Hong Kong police and their investigation into the assault following the national security law. Multiple Chinese celebrities have announced they will no longer work with the beverage brand.