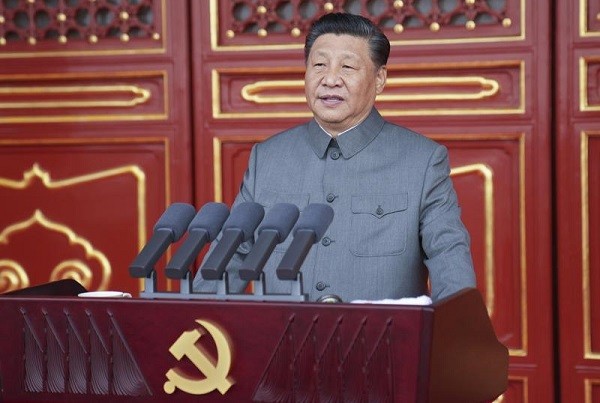 The sight of Chinese Communist Party (CCP) leader Xi Jinping (習近平) cosplaying in full Chairman Mao attire would be funny if it wasn’t so serious.

Xi was addressing a color-coordinated crowd of comrades about the "priorities of the people" during the sort of carnivalistic military parade that can only be put on by the world’s best authoritarian regimes.

From the deliberate amalgamation of China and the CCP as if they were one and the same to the cultish adherence to a false historical narrative and saber-rattling at the free world, the celebration of the 100th-anniversary celebration of the founding of the party showed just how similar this regime is to North Korea these days, albeit with slightly better haircuts.

But beneath all this pomp and propaganda, Xi's rambling, self-indulgent speech featured at least a few comments worthy of note.

Needless to say, Xi spoke once more about Taiwan, reiterating his ambition to "solve the Taiwan issue" and achieve the "complete unification of the motherland."

The fact that he used the term "tong" (統), "unification," is important and one overlooked by many Western media outlets, which tend to mistranslate this word to "reunification."

The difference is an important one, as you cannot reunify with something that has never been yours. It was interesting to see Xi seemingly acknowledging this.

When Xi talks about the "complete unification of the motherland," as he did this week, what he means is annexing Taiwan and any other territory that the CCP wants to control.

It was amusing to see Taipei Presidential Office Spokesperson Kolas Yotaka telling Xi that the CCP will have to choose a different birthday present.

Two other terms used by Xi in relation to Taiwan were "one country, two systems" and the "1992 Consensus."

It seems that Xi is still laboring under the delusion that the "one country, two systems" model could still work for Taiwan, despite the fact that it has been totally discredited by his regime’s annexation of and subsequent abuses in Hong Kong.

It may be the case that, in his ivory tower surrounded by yes men, Xi still thinks this is a credible option for Taiwan. But certainly, few here or elsewhere in the world share this view.

Then there is the "1992 Consensus," upon which Xi still insists future Sino-Taiwanese relations depend.

However, the term is not a contemporaneous one. Rather, it was created in 2000 by former Mainland Affairs Council Minister Su Chi (蘇起) in reference to a series of semi-official meetings between representatives of the CCP and the KMT-led government.

Not only was the "1992 Consensus" created eight years after these meetings but it is also a completely inaccurate term. While meetings were held, no consensus was arrived at between the two sides.

There is no way the so-called consensus can serve as a basis for solving one of the world’s most complex geopolitical problems.

But in recent years, as Taiwan grows ever more distant from China, the CCP has decided that the "1992 Consensus" is one of their red lines. Whether this is an attempt to deliberately destabilize the status quo or just naïvity is for others to decide.

But it clearly remains central to the CPP's thinking, which is a shame, as this rules out any meaningful dialogue between the two sides anytime soon.

One other notable moment of Xi's speech was the bold proclamation that "China will never allow any foreign force to bully, oppress, or subjugate us," a statement that really does take irony to new heights.

The CCP's foreign policy (and indeed much of its domestic policy) is built on a foundation of bullying, oppression, and subjugation. It is used regionally, against small nations, and against large countries like Pakistan to ensure a significant swathe of the world adheres to party lines.

At home, it is precisely this type of approach that is being taken in Hong Kong, Xinjiang/East Turkestan, Tibet, and across China to keep any minority or dissenting voices in check.

If that wasn’t ironic enough for you, in the next sentence, Xi threatens that countries daring to oppose China will “have their heads bashed bloody.” Bullying language if ever I’ve heard it.

What China considers to be overseas bullying tends to be attempts to shine a light on the CPP’s atrocities or to call it out when it starts throwing its weight about on the international stage.

No other country intends to subjugate the Chinese people. What we would all like is for them to be free from the oppression they suffer under the CCP — but of course, this is what Xi and his party fear most of all.

Far from being a day of celebration, the 1st of July should be a day of mourning for everyone in the free world. A century ago this week, one of the most dangerous, genocidal, totalitarian regimes in history was born.

As former U.S. Secretary of State Mike Pompeo noted, no political party has killed more people than the CCP.

The next target for the world’s most dangerous authoritarian regime is Taiwan, and no amount of pageantry can hide how devasting that would be for this country, its people, and the wider world.

If the West wants to find a suitable way to mark the 100th anniversary of the CCP, it will take steps to ensure that this brutal regime is not able to spread its poison any further afield or cast its shadow over humanity for another hundred years.