CRUSH ALL HAN CHINESE RATS! STOMP ON THEIR BRAINS!

Chinese diplomats have pitched the crisis as a friendship test, calling on governments not to take measures that would imply Beijing can’t containFeb. 14, 2020 7:00 am ETChina’s coronavirus outbreak has sparked fears of a global pandemic—and sent Beijing’s diplomats into overdrive in a bid to keep other countries from adopting measures that imply shortcomings in Chinese efforts to contain the crisis.

While Chinese President Xi Jinping assured foreign counterparts that his government is sparing no effort in a “people’s war” against an epidemic that has killed more than 1,380 people, his foreign minister has worked the phones over the past few weeks, relaying a message of calm and confidence to counterparts and senior officials from more than 20 countries.
In Beijing and elsewhere, Chinese diplomats have pitched the crisis as a test of friendship, calling on foreign governments not to suspend travel links with China or to evacuate their citizens—measures Beijing decries as unnecessary, fear-inducing and unfriendly.
“True friendship emerges in times of adversity,” Foreign Ministry spokeswoman Hua Chunying has repeated in recent weeks.
It generally hasn’t worked. Three of the biggest U.S. airlines—American Airlines, Delta Air Lines and United Airlines—have suspended passenger flights between the two countries, as have the national carriers of France, Britain, Egypt, Qatar and Vietnam, among others. More than a dozen countries have slapped entry restrictions on Chinese nationals or people who have recently been in China. 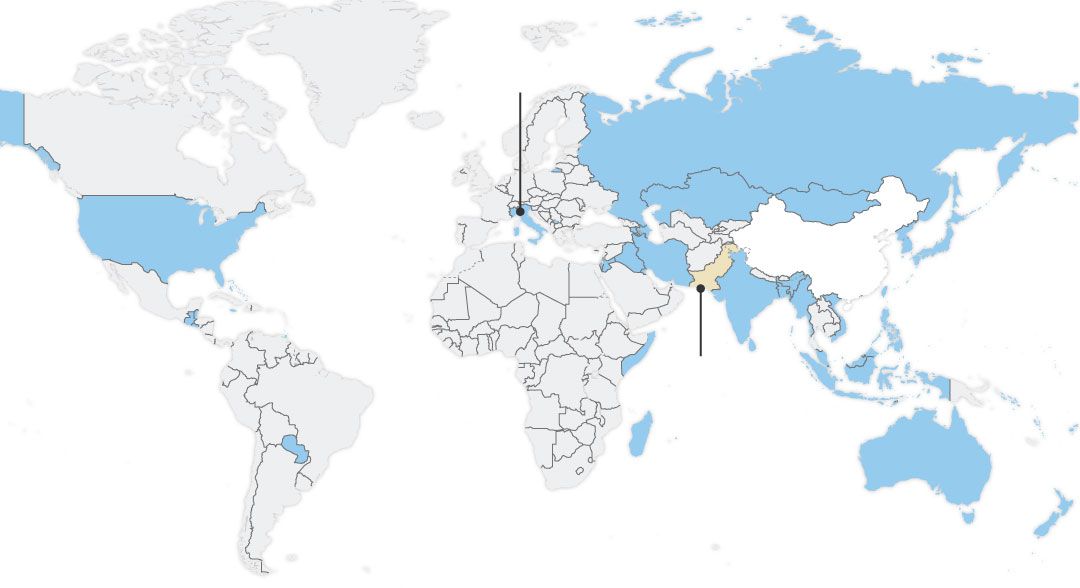 ITALY†
RUSSIA
U.S.
CHINA
PAKISTAN*
AUSTRALIA
“There is still considerable uncertainty about the number of possible cases and the mortality rate of the virus,” said Ryan Manuel, managing director of Hong Kong-based research firm Official China and an expert on the country’s public-health system. “It is easier to hedge one’s bets and shut borders down than to calculate a response based on epidemiological advice.”
In recent days, China’s Foreign Ministry summoned diplomats from a number of Asian and Western embassies in Beijing to complain about their governments’ responses to the epidemic, which have included halting flights and issuing warnings against travel to China, people familiar with the matter said.
In these meetings, as well as with other foreign counterparts, Chinese diplomats have reiterated the World Health Organization’s guidelines for policy responses to the epidemic, which advises against restrictions on international travel, the people said.
At a meeting last week with the Italian ambassador, Chinese Vice Foreign Minister Qin Gang urged Rome to reverse its decision to suspend direct flights between the two countries, which Mr. Qin described as an overreaction “that has caused great inconvenience,” according to a statement from China’s Foreign Ministry.
According to the Chinese readout, the ambassador replied that Italy was willing to approve some round-trip flights by Chinese airlines—though Rome later denied that it would allow flights to resume.
At a meeting last week, Chinese Foreign Minister Wang Yi told senior subordinates that the Foreign Ministry must “guide various countries to assess the epidemic situation objectively and fairly, and to respond calmly and correctly to the situation,” the ministry said.
Despite Beijing’s pleas, a number of countries—including governments that China counts as close partners—have put domestic concerns first.
North Korea, whose isolated government counts Beijing as a vital ally, was the first country to seal its border with China in January. Russia, another friend, closed land crossings with China and suspended visa-free travel between the two countries.

THE LATEST ON THE VIRUS

VIEW IN DEPTH
Iran cut off air transit with China, while Singapore has denied visas to Chinese nationals—as well as visitors with recent travel history in China—and joined more than a dozen other countries in evacuating citizens from the central Chinese city of Wuhan, the center of the outbreak.
Pakistan briefly suspended flights to and from China, resuming them soon after the Chinese Foreign Ministry publicized a phone call between the two countries’ foreign ministers in a statementtitled: “Pakistan Stands Firmly with Chinese Brothers Through This Difficult Time.”
Beijing has reserved the brunt of its criticism for the U.S. and other Western governments. Chinese officials have publicly and repeatedlyaccused Washington of being unfriendly and even antagonistic for taking steps to close its consulate in Wuhan, and for raising its travel alert for China to the highest level—“Do Not Travel”—on a par with Syria, Iraq and Afghanistan.
Chinese officials are “likely responding to what they perceive as insinuation from foreign governments that their system cannot deal with the current challenges,” said Natasha Kassam, a research fellow at the Lowy Institute in Sydney and a former Australian diplomat.
“The propaganda machine tends to latch onto foreign criticism as ammunition, but this is mostly about countering popular scrutiny at home,” she added.
Some countries have stood firmly by China. Prime Minister Hun Sen of Cambodia, a staunch supporter of Beijing and recipient of copious Chinese aid, played down health threats from the epidemic and even offered to visit Wuhan during a visit to China last week. Though the Wuhan plan was scuttled by Chinese officials, citing a tight schedule and epidemic controls, Mr. Hun Sen traveled to Beijing, where he was granted an audience with Mr. Xi at Beijing’s Great Hall of the People.
“True friendship emerges in times of adversity, as the Cambodian people stand with the Chinese people at this special moment,” Mr. Xi told Mr. Hun Sen, Chinese state media reported.
Some critics have accused Beijing of hypocrisy, pointing to its treatment of Mexican citizens during an H1N1, or swine flu, pandemic in 2009. At the time, China forced Mexicans within its borders into quarantine, suspended flights to Mexico and stopped issuing visas to Mexicans—measures Mexico’s government denounced as discriminatory and ungrounded.
“China never admitted this was wrong, or apologized,” Jorge Guajardo, Mexico’s then-ambassador to China, wrote on Twitter this month.
Some governments have sought to strike a balance between assuaging domestic demands and placating Beijing. Singapore, the Southeast Asian financial center that was hit hard by the 2002-03 outbreak of the severe acute respiratory syndrome, or SARS, has publicly praised China’s efforts to combat the Covid-19 outbreak while imposing border controls of which Beijing disapproves.

How useful are border closures and visa restrictions in containing the coronavirus outbreak? Join the conversation below.
A day after China’s state-run Xinhua News Agency quoted Singapore’s foreign minister telling his Chinese counterpart that the city-state “admires China’s vigorous fight” against the epidemic, Singapore said in late January that it would suspend issuing visas to Chinese nationals, as well as block visitors who recently traveled in China, making it one of the first foreign governments to adopt such a measure.
China’s Foreign Ministry responded by summoning the Singaporean ambassador to convey its displeasure over the new restriction, people familiar with the matter said.
Written by Joseph Belbruno