Erdogan is trapped in a conflict of his own design

Hannah Lucinda Smith, Samos
Monday March 02 2020, 5.00pm GMT, The Times
Share
Save
There is a certain breed of Turkish diplomat — generally older, always pro-western — which has long warned President Erdogan that this day would come.
The Turkish leader’s foreign policy swivel, which began a decade ago but has accelerated since 2016, has taken Turkey away from its traditional western allies and towards its old rival Russia.
In a short period Mr Erdogan has brought Ankara’s relations with Washington to their lowest point in recent history and unravelled a decades-old foreign policy that had positioned Turkey as one of the few countries in the world able to command respect and influence in both the Islamic world and western capitals. 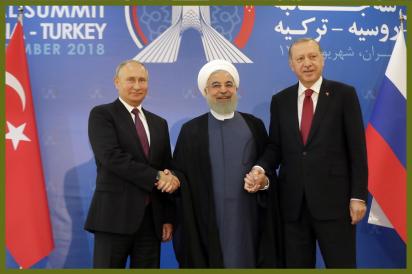 President Erdogan, right, with President Putin of Russia and President Rouhani of Iran in 2018. After buying Russian defence equipment his relations with Moscow soured
ALAMY
He has alienated and insulted the European Union, which Turkey once aspired to join, while his purchase of Russian defence equipment has deprived Ankara of Nato’s new generation fighter jets and turned it into the black sheep of the alliance.
Now everything is coming to the boil in Idlib, north Syria, where President Assad’s lightning advance towards the Turkish border is laying clear how little President Putin cares for Mr Erdogan’s desires and ambitions in the region, and how exposed the Turkish president’s vacillating foreign policy has left his country.
Mr Erdogan is now fighting a battle on three fronts. First, there is his overt war against Assad, which has led to the death of more than 50 Turkish soldiers in the past month. The president took almost complete control of the executive after the failed coup attempt in 2016
GETTY IMAGES
Second is his deniable war against Russia, which is almost certain to have carried out some of the bombings against Turkish troops, a fact which both sides currently find it expedient to sweep aside. Finally — and most crucially for Mr Erdogan — he is fighting a domestic battle in which any new influx of Syrian refugees into Turkey could prove fatal to his falling popularity.
Turkey’s old diplomatic hands say that he has only himself to blame. He has increased his stranglehold on the state through purges prompted by an attempted coup in 2016 and a new constitution that vests nearly all executive power in him, leaving ambassadors, undersecretaries and even the foreign minister almost powerless. That has left Mr Erdogan, for whom foreign relations have never been a forte, in almost sole charge of balancing delicate relations while his region experiences its most turbulent period in decades.
“Erdogan’s big mistake was to think that a relationship with Russia can be based on trust,” said Faruk Logoglu, a retired Turkish diplomat who was ambassador to the United States when Mr Erdogan’s AK Party took power in 2002. 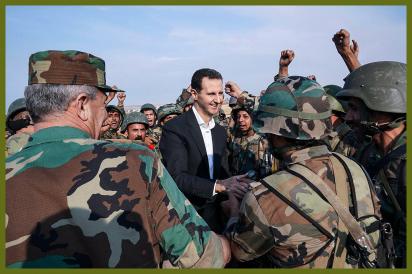 President Assad visits Idlib. More than 50 Turkish soldiers have been killed by Syrian forces and their allies in the past month
SANA/EPA
“[His relationship with Mr Putin] was a kneejerk reaction to what he believed was his disenfranchisement by the US, Nato and the EU. We are now seeing a collapse of Turkey’s foreign policy. He is facing multiple dead ends and they are all self-created.”
As his relations with Mr Putin sour, Mr Erdogan is signalling that he may turn to the US for a lifeline. Ankara and Washington are in talks to return Patriot missiles to the Syrian border, only eight months after a Russian S-400 system was delivered to Turkey. A US delegation arrived in Ankara last month in an attempt to build bridges but it is unlikely that the toxicity that has accumulated over the past five years can been swept away simply because they are now on the same side in Idlib.
“The main deficiency in Turkey’s foreign policy with the West is trust, and I doubt that the horse-trading around the Idlib crisis could contribute to a building of rapport and confidence,” said Aykan Erdemir, a former member of the Turkish parliament and now senior director of the Turkey programme at the Foundation for Defence of Democracies, a Washington think tank. Turkey’s attempts to prevent President Assad’s advance into rebel-held Idlib may mean it has to strike a costly deal with Russia
MURAD SEZER/REUTERS
“[Erdogan] has a remarkable ability to convince his voter base about the merits of his frequent foreign policy volte-faces and is capable of pivoting back to Ankara’s western allies. It is naive, however, to assume that such a course correction would also lead to Turkey’s return to transatlantic values, particularly pluralism and the rule of law.”
As he plays nice with the Americans Mr Erdogan is playing tough with Europe, weaponising Turkey’s four million refugees by opening its borders. It is a clumsy attempt to win backing in Idlib by showing what the consequences of a new refugee wave would look like, and it is unlikely to work. Greece has already responded by shutting its borders and the move has further tarnished Mr Erdogan’s image in Brussels.
His last, and possibly only, option is to strike a deal with Mr Putin that allows him to save face at home and avert catastrophe in Idlib. The two men may meet on Thursday, although that has not been confirmed. A new agreement between them that establishes a safe zone in what is left of rebel-controlled territory would enable Mr Erdogan to claim some kind of victory — but Mr Putin holds all the bargaining chips and will be certain to demand huge payback from Turkey in return. 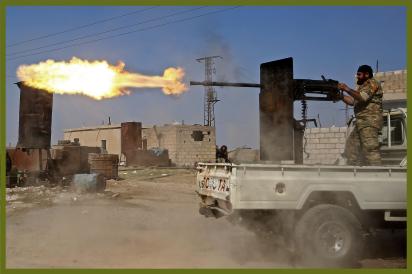 A Turkish-backed Syrian fighter in the border town of Ras al-Ain. Mr Erdogan may turn to the United States for extra firepower but has alienated Washington with his anti-western stance
NAZEER AL-KHATIB/GETTY IMAGES
Once, Mr Putin had appeared to offer Mr Erdogan the promise of a friendship in which the Turkish leader would never be castigated for his mounting authoritarianism and would always have his anti-westernism indulged.
Had he paid heed to history he would have known that he was playing with fire. Russia and Turkey have never fought on the same side of any war in recent history, and Moscow has always been ready to use its Middle Eastern proxies to needle a Nato member.
Foreign policy is a difficult and generally thankless job. When it goes well, almost no one at home notices. When it goes badly it can tarnish a leader’s legacy forever — just ask Tony Blair.
For Mr Erdogan, there is an added and self-inflicted problem. As his domestic support has slipped he has increasingly relied upon world affairs to give it a boost, telling Turks that the West is to blame for all their woes. With Turkish soldiers now arriving home in coffins from Syria that façade is fast slipping. The coming days will show whether Mr Erdogan has the insight to realise that and the skill to mend some of the damage
Written by Joseph Belbruno