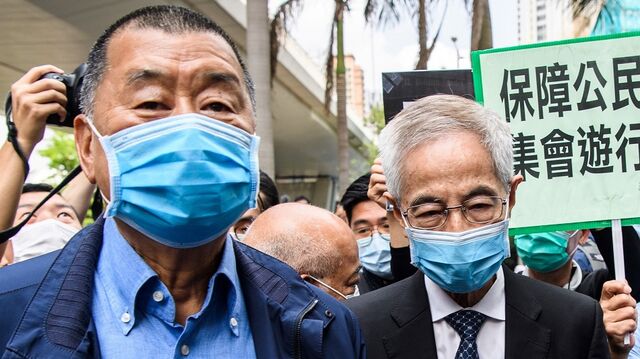 Sign up for Next China, a weekly email on where the nation stands now and where it's going next.

Hong Kong’s “father of democracy” Martin Lee and media mogul Jimmy Lai were among a group of opposition activists found guilty for attending an unauthorized protest in 2019, in the latest blow to the city’s beleaguered opposition.

Lee, 82, who helped lead the pro-democracy camp during the former British colony’s transition to Chinese rule, was convicted Thursday in a court in the West Kowloon area along with fellow activists Albert Ho, Leung “Long Hair” Kwok-hung, Lee Cheuk-yan, Cyd Ho and Margaret Ng. The court set sentencing for April 16.

The verdict is the latest in a series of major setbacks in recent weeks for Hong Kong’s pro-democracy camp. The group on trial comprised veteran activists who have for years supported causes such as human rights and women’s rights, and organized vigils commemorating the 1989 crackdown on student demonstrators in Tiananmen Square.

Martin Lee was among 15 prominent democracy activists accused last year of participating in a historic -- but unauthorized -- march on Aug. 18, 2019. The mostly peaceful demonstration was one of the biggest held during months of unrest over proposed extradition legislation, with an estimated 1.7 million people attending.

The case is part of a push to disband Hong Kong’s democratic institutions and clamp down on the opposition’s moderate wing, according to Michael Davis, a professor of law and international affairs at O.P. Jindal Global University in India and a former law professor at the University of Hong Kong.

“The government has chosen 15 people very carefully out of the 1.7 million protesters, and all are moderate democratic activists and politicians,” Davis said. “It’s very hard to separate this trial from the current effort to prevent participation in the political process.”

Hong Kong police have swept up many of the city’s established opposition leaders among the more than 10,000 activists arrested since the protests erupted in June 2019. Some, such as Jimmy Lai, face multiple prosecutions, including charges under the national security law.

Two former opposition lawmakers, Au Nok-hin and Leung Yiu-chung, had previously pleaded guilty to charges related to the August 2019 protest. Six other people are expected to go to trial later this year.