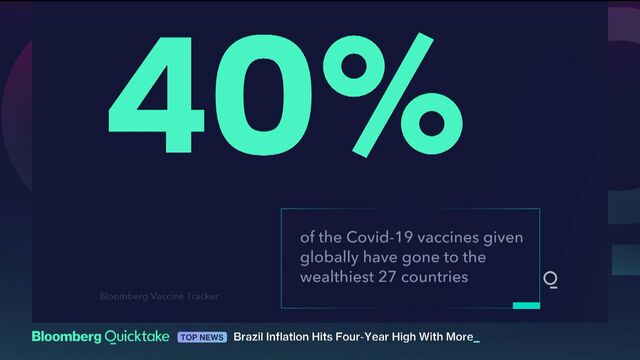 40% of Covid Vaccinations Have Gone to 27 Wealthy Nations

Sign up here for our daily coronavirus newsletter on what you need to know, and subscribe to our Covid-19 podcast for the latest news and analysis.

Concern over the efficacy of China’s Covid-19 vaccines is rising after a senior health official acknowledged the level of protection they provide is not high, before backtracking on the comments, and a key shot was confirmed to be less potent than other immunizations.

George Fu Gao, head of the Chinese Center for Disease Prevention and Control, said at a forum on Saturday that something needed to be done to address the low protection rate of the Chinese shots, according to local news outlet the Paper.

The rare admission by a senior Chinese official appeared to go viral on social media over the weekend, but posts and media reports about Gao’s comments were quickly censored or taken down. Gao told state-backed newspaper the Global Times on Sunday that his remarks were misinterpreted, and were only meant to suggest ways to improve the efficacy of vaccines.

Meanwhile, a study published over the weekend on late-stage testing of Sinovac Biotech Ltd.’s vaccine in Brazil confirmed readouts from late last year that showed its efficacy at slightly above 50%, a level that barely crosses the mark of minimum protection required for Covid vaccines by leading drug regulators.

Other coronavirus shots developed by Chinese companies have reported efficacy of anywhere between 66% to 79% in preventing symptomatic Covid -- all below the more than 90% protection rate found in the mRNA vaccines developed by Pfizer Inc. and Moderna Inc.

The public, high-profile recognition that China’s vaccines may be less effective may fuel already-widespread vaccine hesitancy among the Chinese population, many of whom now see Covid as a distant threat and also harbor concerns about locally developed shots. China is aiming to vaccinate 40% of its population -- or 560 million people -- by the end of June, an ambitious effort that will require it to move at twice the pace of the U.S.

At a forum on vaccines in the western city of Chengdu Saturday, Gao suggested that following up inoculations with additional booster shots and mixing different types of vaccines could help tackle the effectiveness issue, according to the Global Times. He also appealed to people to get vaccinated, saying that the benefits far outweighed the risks.

Chinese vaccine developers have been criticized for a lack of transparency and lag foreign peers in publishing full trial data in peer-reviewed medical journals. The study on Sinovac vaccine’s late stage trial in Brazil came three months after its efficacy readouts, while state-owned Sinopharm has yet to publish full data from Phase III trials for its two inactivated vaccines.

A separate Sinovac study involving more than 10,000 people in Turkey raised the vaccine’s efficacy to 83.5%, furthering questions about the shot’s efficacy. The company has said that differences in the severity of outbreaks, various Covid strains in circulation and the definition by which virus cases are identified in studies have all contributed to different results across several trial sites.