Chinese authorities have said they allowed two imprisoned Canadians to phone their families at Christmas – the first time one of the men had spoken with his family in more than two years.

Michael Kovrig and Michael Spavor were both permitted brief calls home, a move which Chinese officials said was motivated by “humanitarian considerations”. 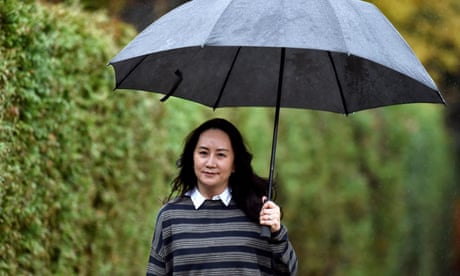 News of the phone calls came as it emerged that Canada made an exception to coronavirus travel regulations and granted permission for the family of a detained Huawei executive to spend Christmas with her in Vancouver.

For nearly two years, Canada has been clear that it sees espionage charges against Kovrig and Spavor as retribution for its detention of Meng Wanzhou, who was arrested two years ago at Vancouver’s international airport and is currently fighting extradition to the United States on charges of bank fraud.

Extradition hearings in Vancouver this week have highlighted the starkly different conditions for the three figures caught up in the geopolitical fight, said Stephanie Carvin, a professor of International relations at Ottawa’s Carleton university.

“I don’t want Meng’s conditions to be worse, but the very detention of the two Michaels is entirely unjustified,” she said. “A modicum of better treatment for them is welcome, but it really just highlights the injustice of it all.”

In letters to his family, Kovrig has described life with little human contact in a cell measuring three meters by three meters. In March, he was permitted a phone call to his ailing father, but between January and October of last year, the coronavirus pandemic meant that Canadian officials had no access to the two men.

In contrast, Meng’s bail conditions allow her to move freely around Vancouver until 11pm, and the court heard this week that she makes frequent trips to restaurants and “private shopping” appointments at high-end retailers.

The court also learned that Canada granted permission to Meng’s husband, Liu Xiaozong, and her two children to visit over the holidays. Meng spent Christmas Day at a restaurant that catered exclusively to her group of 14.

Under current rules, foreign nationals are restricted from visiting Canada unless they are travelling to see immediate family members who are permanent residents or Canadian citizens. Meng has not been a permanent resident since 2009.

Liu told the court he came to Canada in October and in December was followed by the couple’s children. During testimony, he also admitted he and their children stayed with Meng after arriving from abroad – an apparent violation of Canada’s public health guidelines, which require 14 days’ isolation after arriving from outside the country.

On Thursday, China’s foreign ministry spokesman, Zhao Lijian, declined to say if the families of Spavor or Kovrig would be granted similar access.

“It is normal for governments around the world to deal with matters involving each others’ citizens on the basis of mutual respect and reciprocity,” said Zhao, adding that the two men and their families were “deeply grateful” for the chance to speak over the phone.

Canada’s foreign ministry said in a statement on Thursday it had struck a deal with the Chinese government for “increased family and consular access” for the two men. The new agreement appears to re-establish monthly contact between consular officials and the detained Canadians.

But Carvin cautioned that the resumption of consular visits appeared to mimic a common Chinese negotiation strategy in trade talks.

“Right before talks between the two countries begin, they ban the import of our canola. Every single time,” she said. “And so Canada often finds itself giving something up before the talks even begin … It’s a negotiating lesson we still seemed not to have learned.”