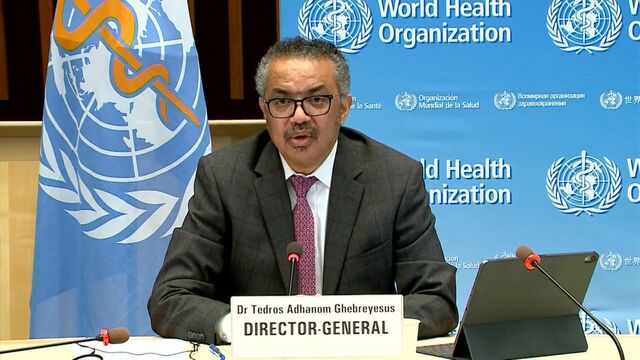 WATCH: Tedros says he's "disappointed" after the WHO temporarily prevented from entering China.

The World Health Organization expressed disappointment with China for delaying the travel of experts to the Asian country to investigate the origin of the virus, in a rare instance of public criticism from the international organization.

Chinese officials have not yet finalized permission to allow WHO-appointed experts to enter the country even as some of them embarked on travel, said WHO Director-General Tedros Adhanom Ghebreyesus in a briefing on Tuesday. The delay comes despite months of negotiation and planning between Chinese officials and the 10-member expert team.

“I am very disappointed with this news given that two members had already begun their journeys and others were not able to travel at the last minute,” Tedros said. “We are eager to get the mission underway as soon as possible.”

The delay by Chinese authorities fuels concern that Beijing is obstructing international efforts to trace the origins of a pandemic that has now killed over 1.8 million people worldwide. Stung by criticism that China initially covered up the extent of the crisis, state media and government figures have been pushing the possibility that the pathogen did not emerge solely in the Asian country.

Members of the WHO expert team appear to have called off their travel for now. “No, luckily wasn’t on the way yet,” Dutch virologist Marion Koopmans said in a Twitter post, in response to a question on whether she was facing travel obstacles.

The WHO has been criticized for being too deferential to China through the course of the pandemic, and has been blamed by other countries for initially downplaying the severity of the crisis. U.S. President Donald Trump said last year that the superpower would terminate its relationship with the WHO unless it “demonstrated independence” from China.

Top Chinese epidemiologist Liang Wannian, who oversaw the country’s virus response until September last year, told Bloomberg News in an interview on Tuesday that the WHO’s investigation would “begin very soon” in China.

The WHO team and experts from China plan to jointly analyze data and samples taken from the Wuhan wet market where many of China’s earliest Covid-19 patients appear to have become infected, he said.

Liang said he has been working with two WHO experts since July to formulate a plan on how to conduct the tracing work in China.