Philip Sherwell, Bangkok
Sunday July 19 2020, 12.00am BST, The Sunday Times
Share
Save
Plans for a World Health Organisation (WHO) mission to China to investigate the coronavirus pandemic have been postponed after two scientists spent a week in a Beijing hotel in quarantine.
The UN agency had hoped to deploy a full team this month if negotiations with Chinese scientists and government officials last week made progress.
But Michael Ryan, head of its health emergencies programme, acknowledged this weekend that the quarantine requirements and “working remotely” had been “not ideal” for the two experts, although he was “very pleased with collaboration” so far.
Putting together a multinational team and bringing it to China would take “weeks, not days”, Ryan said. He cited challenges of logistics and “health risk management”, an apparent reference to the quarantine.
China requires all foreign arrivals to spend two weeks in isolation. It was not clear whether the WHO hoped that its emissaries would be exempt. Ryan said the agency “fully respects” the procedure. There was a need for a “concrete plan of action, with remaining gaps and areas that require further study and elaboration to be clearly elucidated”, he said.
His comments seemed to indicate that the advance party — an epidemiologist and an animal health specialist, whose identities have not been revealed — were still negotiating terms for a larger group.
The origins of the pandemic are politically sensitive in China and the subject of controversy more widely. The exact conditions for the mission — where it can visit, whom it can meet, what data it can study and which scenarios can be investigated — will be crucial to its prospects. 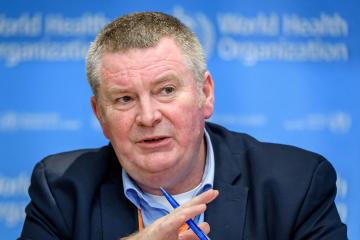 Michael Ryan said the WHO respected China’s quarantine procedures for foreign arrivals
GETTY
In return for allowing access, China might try to manipulate the visit or demand that investigations be conducted in other countries. Beijing has insisted that there is no evidence that Covid-19 originated in China, although the central city of Wuhan was ground zero for infections late last year.
Hua Chunying, the foreign ministry spokeswoman, said last week that the WHO agreed “that origin-tracing is an ongoing process, probably concerning many countries and localities, and the WHO will conduct similar trips to other countries and regions in light of the actual need”.
It was not clear whether the UN agency had actually made any such commitment. This month Donald Trump, the US president, accused the WHO of pandering to China as America submitted its one-year notice to quit the organisation.
Beijing wants the WHO mission to focus on how the virus jumped from animals to humans, rather than on the source of the outbreak. There is widespread agreement that the virus came from bats, but the route it took to humans is not known.
A Sunday Times Insight investigation, published this month, raised questions about the role of the Wuhan Institute of Virology, a biosecurity laboratory where a bat coronavirus similar to the one that causes Covid-19 was being researched. There are no plans for the two scientists in the WHO advance party to travel to Wuhan — even when Beijing decides that they can leave quarantine — and it is still not known whether a future team would be allowed into the laboratory.
Some experts have suggested that even if China allows a full mission to go ahead as a gesture of co-operation, WHO scientists will not be able to obtain the information required for an independent inquiry. “Beijing wants to avoid giving Chinese people any impression from this visit that China was the source of this pandemic,” said Yanzhong Huang, an expert on China’s health system at the Council on Foreign Relations in New York.
“This visit has barely been mentioned by the Chinese authorities, which reflects the whole approach. The composition of any future mission — what they can do, where they can visit — is all subject to negotiation.”
A Dutch epidemiologist who has worked with the WHO said: “There is no confidence in the official data or information that the Chinese have provided about this pandemic.”
China has a record of cover-ups and misleading the WHO when it comes to coronavirus outbreaks. In 2003, at the height of Sars, Beijing hid patients from WHO inspectors, whistleblower doctors later revealed. In one incident, 31 patients were bundled out of a hospital and driven around in an ambulance while the WHO team toured the establishment. At a second hospital, 40 patients were moved to a hotel during a WHO visit in an attempt to mask the scale of the outbreak.
Gro Harlem Brundtland, who was WHO director-general from 1998 to 2003, criticised China at the time for being slow in sharing information about Sars. “It would have been much better if the Chinese government had been more open in the early stages,” she said. “It would have been definitely helpful if the international expertise and the WHO had been able to help at an earlier stage.”
Brundtland added: “I’m saying as the director-general of the WHO: next time something strange and new comes anywhere in the world, let us come in as quickly as possible. Sars has changed the perception of infectious disease spread. The first and most important lesson concerns the need to report openly and promptly.”
Beijing showed no signs of learning that lesson as the new coronavirus epidemic ripped through Wuhan in January.
Its initial handling of the outbreak — characterised by delays, bungling and cover-ups — has been widely criticised.
Leaked emails from early January revealed the private frustration of senior WHO officials that China was not sharing information about the mysterious lethal disease taking hold in Wuhan.
Tedros Adhanom Ghebreyesus, the WHO chief who has been heavily criticised by the US, praised China’s handling of the outbreak during a visit to Beijing in late January — but there is still no sign of the openness Brundtland called for.
China’s approach to the current mission seems to be following a familiar pattern. The WHO said its advance party would work with officials from the science ministry and the National Health Commission to determine logistics for the full team and its scope.
“This preliminary mission . . . is to understand what has been discovered already, what has been studied already, what the data [is] that’s available, and then from that to lay out what further studies need to be carried out and what international experts will be useful in engaging with and partnering with Chinese colleagues,” said Ryan.
Written by Joseph Belbruno