It has been a lonely year for Adalet Fidan, the mayor of Silopi in Turkey’s Kurdish south-east – and not just because of the pandemic.

In 2019, when she was elected, Fidan was among a solid cohort of 65 candidates from the progressive left, pro-Kurdish Peoples’ Democratic Party (HDP) to win seats in nationwide local elections. Now, after a sustained government purge of HDP officials, she is one of only five HDP mayors left in office, the rest sacked or imprisoned and replaced with government appointees.

“It’s a lot of pressure and responsibility. Every day I wake up and worry it will happen to me too: I think, ‘Today is my turn’,” she said.

“The law doesn’t mean anything here. I could be kicked out of my job or sent to jail thanks to made-up terrorism charges or fake witnesses. Anything could happen.”

Turkey’s judicial system has been weaponised throughout the country’s turbulent history to advance or stymie different political agendas – but as President Recep Tayyip Erdoğan has consolidated his grip on power, critics say the state crackdown on opposition is unprecedented. For HDP, the party which has posed the most significant threat to Erdoğan’s power, the reprisals have been brutal.

“I have been a lawyer since the 1980 military coup and I have not seen behaviour as ruthless as the current AKP [Erdoğan’s ruling Justice and Development party] government in all those years,” said Hasip Kaplan, a prominent Kurdish lawyer, politician and author from Şırnak.

“At the time of previous coups, we could at least defend our clients in court. Today, there is a government that is seeking control of the independent bar associations, judges with no experience appointed to high courts. These are difficult days.”

Not so long ago, the HDP’s future still seemed bright. Formed out of an alliance of leftists and Kurdish nationalists in 2012, the party is often compared to Green party movements and European democratic socialist parties such as Podemos in Spain and Syriza in Greece. A parallel is also drawn with Sinn Féin, because of its historical association with the outlawed militant Kurdistan Workers’ party (PKK).

In just a few years, the HDP made good on its promise to appeal to a broad spectrum of Turkish society, rather than just a Kurdish voter base, rising to prominence during the Gezi park protests against the increasingly authoritarian direction of the AKP to become the country’s third-biggest political party.

In the 2015 national election, the HDP delivered a searing blow to the AKP by winning enough seats to break through the 10% election threshold that has traditionally kept small parties and Kurdish politicians out of parliament, in the process destroying the ruling party’s majority. The elation was short-lived, however.

To undo the HDP’s success, the government pulled out of peace talks with the PKK, plunging Turkey’s majority Kurdish south-east into renewed violence, and began arresting HDP politicians and supporters over alleged links to the militant group. When the election was re-run later in the year, it yielded a result much more to Erdoğan’s liking.

HDP’s charismatic former leader, Selahattin Demirtaş, was arrested the year after, and faces a sentence of up to 142 years in prison despite an order from the European court of human rights that Turkey must free him.

Effectively blacklisted from Turkish media, over the past five years the HDP has struggled to maintain momentum in an increasingly hostile environment. According to Kaplan, about 16,000 party members have been arrested or detained, many under the state-of-emergency conditions declared after the failed 2016 coup.

For Ayhan Bilgen, who served as the HDP mayor of the north-eastern city of Kars until September, the police knock at the door one morning was not a surprise. He was cheered on by supporters who had gathered outside his home as he was bundled into a police car, and has been detained since, charged with terrorism-related offences for his alleged role in instigating ethnically charged protests which turned violent in 2014.

The state’s unwillingness to deal with the Kurdish issue only strengthens the resolve of people fighting for representation, Bilgen wrote from prison. “Steps that pave the way for real democracy are difficult. But it is crucial for Turkey to overcome this political deadlock,” he said through his lawyer.

There are still glimpses of hope. Voters defied the president’s will during a re-run of the Istanbul mayoral election last summer when the HDP informally lent its support to the largest opposition group, the Republican People’s party (CHP), handing its candidate a definitive victory.

The result was celebrated not just because it showed that even after 16 years, Erdoğan’s grip over Turkey is not complete – but because it marked the first time that the nationalist, liberal and pro-Kurdish elements of Turkey’s opposition have managed to work together effectively.

Since then, the HDP has borne the brunt of an escalating crackdown. Erdoğan appears to think that instead of banning the party altogether, keeping it inside the legitimate political spectrum can help him scupper the opposition’s attempts at a united front: a cross-border offensive against Syrian affiliates of the PKK in October last year, for example, was supported by the CHP, infuriating HDP MPs who voted against it.

The newly formed Kurdish Democratic party (KDP), which registered in the unofficial Kurdish capital of Diyarbakir earlier this month, is widely believed to be funded by government-friendly sources in an effort to siphon off conservative Kurdish votes.

“The government’s tactic of not banning the HDP yet is sensible, but I think instinct will overrule tactical thinking at some point,” said Selim Koru, an analyst with Turkish economic policy thinktank Tepav. 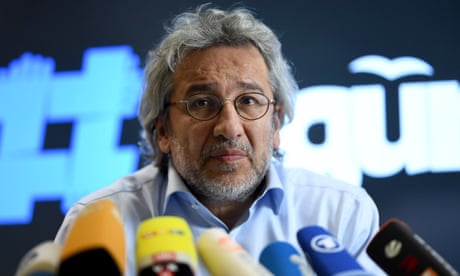 “It is almost impossible to run competitive elections in Turkey any more … and if the HDP shows signs of putting up a real fight, the government will move to prevent that.”

Turkey is not due to hold a general election until 2023; despite the country’s economic woes, compounded by the pandemic, Erdoğan still polls strongly, and a recent Metropoll survey found that 29% of Kurds would vote for the ruling AKP, compared with 32% for HDP.

There remains, however, a stubborn block of about 10% of Turks – mostly Kurds – who will stick with the HDP, posing a looming problem for the AKP down the line as the party’s margins slowly begin to narrow. The HDP may be down, but it’s not out.

“We always knew this job would be difficult. But we also know we have the people behind us,” said Fidan, one of the last HDP mayors still in office. “That gives us the courage to keep fighting.”