The families of 12 Hong Kong activists intercepted at sea by China after fleeing the city have not had contact with them since they were arrested almost a month ago, according to the relatives of one of the detainees.

Wong Wai-Yin disappeared one evening after telling his wife and mother that he was going to the police station. A few days later they were informed that he had been taken into custody. They said they had not had contact with him.

The 12 detainees, ranging in age from 16 to 33, were travelling by speedboat to Taiwan when they were detained by the Chinese coast guard. They have been charged with illegal entry into mainland China and are being held in Shenzhen.

The detainees faced charges in Hong Kong related to last year’s pro-democracy protests, and tried to escape amid a crackdown on activists and wider concerns about the legal system after Beijing imposed a national security law on the city in June.

Mainland officials have also not allowed them to meet lawyers hired by their families, instead assigning government-appointed lawyers.

Mike Pompeo, the US secretary of state, has expressed concern that the detainees had not been given access to lawyers of their choice and called on “authorities to ensure due process”.

The UN’s Office of the High Commissioner for Human Rights echoed this view. “We urge Chinese authorities to ensure due process rights to [the] group of 12 Hong Kongers arrested at sea, including swift access to legal representation of their choosing.” 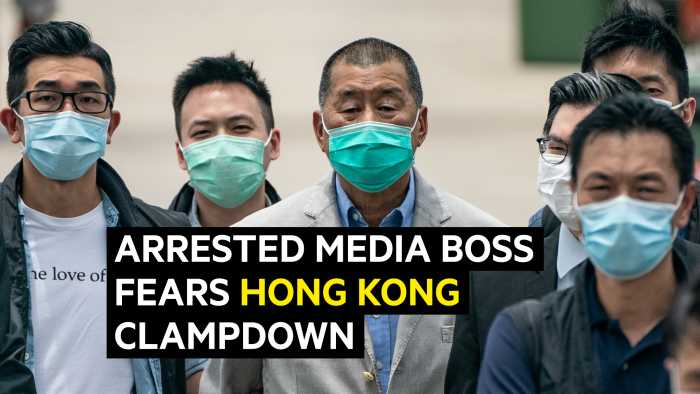 Hua Chunying, a spokesperson for China’s Ministry of Foreign Affairs, said the arrested Hong Kongers were not democracy activists but were advocating separatism from mainland China.

Mr Wong’s wife, who was born on the mainland, is concerned about his chances of being provided with a fair process. “I have no trust in China’s legal system,” she said.

The two women hope the authorities will allow Mr Wong to meet and work with the lawyer they had hired.

The family of Andy Li, the only detainee who had been arrested under the national security law before his detention by Chinese authorities, said his decision to flee was evidence of the growing worries about Hong Kong’s legal system.

“The very fact that he decided not to face trial in Hong Kong reflects the total breakdown of confidence in the legal system — and he was not alone,” the family said in a statement posted on Facebook.

“People who decided to risk their safety to flee believe there is little chance of a fair trial under an independent judiciary.”

Mr Wong’s mother said her son’s case was proof that last year’s protests against an extradition law that would have allowed criminal suspects to be sent to mainland China for the first time were justified.

“Hong Kongers were right to oppose the extradition law,” she said. “I tell you as a person who has experienced it. If the extradition law was passed last year, hundreds and thousands of families would be facing the same situation as me.”